How to Rescue Knowledge from the Age of Information 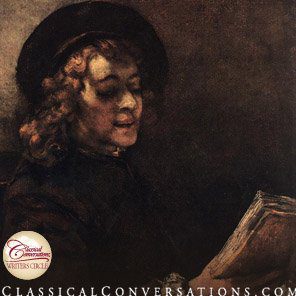 I know a few things—not many, but a few. I know the texture of a pin oak tree’s bark. I know the form of the constellation known as the Big Dipper. These examples are simple, not philosophical or foundational, but they illustrate the difference between information, which is readily available to all of us, and knowledge, which is attained only with time and effort. This summer, I have been reminded several times that although I have access to a great deal of information, I do not truly know much at all.

In the Foundations program (cycle 3), children learn about the Age of Information and Globalization, when “the invention of computers and their use in industry, business, and academia…caused a surge in the availability of information…and intimately connected not only varied areas of industrial society but also far-flung regions of the world.”1 To see this trend in action, we need only to consider the use of the iPhone to settle family debates about geography (What time is it in India?2), literature (What was the name of that book that exposed the meatpacking industry?3), and grammar (Should I use ‘if he were’ or ‘if he was’ in this formal e-mail?4). The Internet has an answer for everything, or so it seems.

In distinguishing knowledge from information, I want to steer away from pragmatic arguments such as, “Well, you won’t be able to use your [iPhone/graphing calculator] when you take the SAT, so you shouldn’t rely on it now!” These arguments have merit, but they are subject to the shifting norms of our increasingly information-driven culture. Now, you can use an iPhone in a business meeting. Soon, you may be able to use one on a standardized test. More importantly, pragmatic arguments miss a subtle distinction between knowledge and information that goes to the heart of education.

The literary editor of the New Republic, Leon Wieseltier, gave a commencement address at Brandeis University on May 19, defending the study of the humanities. In it, he explained the distinction I am trying to make:

“In the digital universe, knowledge is reduced to the status of information. Who will any longer remember that knowledge is to information as art is to kitsch—that information is the most inferior kind of knowledge, because it is the most external? A great Jewish thinker of the early Middle Ages wondered why God, if He wanted us to know the truth about everything, did not simply tell us the truth about everything. His wise answer was that if we were merely told what we need to know, we would not, strictly speaking, know it. Knowledge can be acquired only over time and only by method.”5

As Wieseltier argues, information gained at the touch of a button is necessarily abstract and impersonal, while knowledge implies a relationship with the facts learned. If we think of information as a brightly colored child’s toy that sits on a shelf beside many others, collecting dust, then knowledge would be the well-worn corduroy bear with stuffing leaking out of its foot and a threadbare spot on its nose. To acquire knowledge, the child has played with the information, studied it from multiple angles, hung it upside down by one foot, dropped it from great heights to see if it would bounce, and made it a character in many imagined scenarios. Knowledge requires the learner to be active, while information is collected passively and rarely used.

Let me give you an example from my own life as a learner. I can collect information about the pin oak tree. Its name is quercus palustris. It grows in the eastern United States from Connecticut to Georgia. Its characteristics include small acorns and leaves with deep sinuses.

On the other hand, I also know the texture of its bark. A few months ago, on a warm spring afternoon, I took a walk in a park near my house. Drawn to the drooping limbs of a tree along the path, I hoisted myself onto the lowest limb, first testing its strength and ability to bear my weight. I scooted along the branch, feeling the ridges in the bark deepen as I approached the trunk. Pin oak trees are good for climbing because of the downward angle of the lower branches. Sitting in the juncture of a limb, I rested one hand on the trunk and looked out. Many of the leaves around me were dead, but I could see the beginning of new buds forming at the base, getting ready to push out the old ones. I thought about the similarity of baby teeth that linger until the adult tooth cuts through the gum. What an effective metaphor for childish habits that yield only to adult responsibility!

Notice the many things I discovered about this tree as I sat in its midst. Features of leaf, branch, and root became evident not as cold information, but as living knowledge, deepened by experience and by other stories into which I could integrate my new learning. Both information and the knowledge are useful, but knowledge invites curiosity and a sense of wonder.

Here is another example. I can collect information about the Big Dipper. It is a group of seven stars, roughly ladle-shaped. In some parts of the world, it is also known as the Plough.

On the other hand, I also know the form of the Big Dipper. Last week, when I was visiting a beach house on the North Carolina coast, I stepped outside late one evening and saw the Big Dipper featured clearly overhead. I was able to use it to locate the North Star. As I marveled at the clarity of light in rural areas free from city light pollution, I thought back to the Southern Cross, the constellation I sought out while I was studying abroad in New Zealand. I wondered why the stars have at once diminished and comforted people since ancient times. “It is the star to every wandering bark,” Shakespeare wrote, saying that love is as constant as the North Star, and, like the star, gives direction and guidance to our actions. The stars compel us to look up.

Notice the richness of story inspired by knowledge. What teacher or parent would not prefer to read this kind of essay rather than the bare recitation of information given earlier? I say this not to devalue conciseness. Certain situations call for information, short and simple: I do not want my brain surgeon to wax poetic about philosophy and Frankenstein when she is drilling through my skull. However, when our entire concept of education is driven by the need to collect and regurgitate information like a machine, we risk becoming, as Wieseltier warns, “ignorant of ignorance.”6

So, as humans who live in the Age of Information, how can we rescue knowledge for ourselves and for the next generation? This summer, I encourage you to ask, with intentional use of the word, “What do I know?” and, “What do my children know?” Shape your assessment of learning around these questions. Then, as you look ahead to the next year of schooling, evaluation, and assessment, ask yourself, “What do I want to know?” and “What do I want my children to know?” Shape your educational methods and goals around these questions. Finally, give yourself permission to enjoy the slow, often painstaking journey of experiences that lead to knowledge. I think you will find, as I have, that the scenery there is far better than it is on the information highway.

Sanford, Courtney. “I Am Not a Machine (Why we practice art and cursive, and how you can do it too!).” Classical Conversations Writers’ Circle. December 3, 2012.

4 “If he were” is in the subjunctive mood, which is the proper form when a clause is contrary to fact or uncertain: e.g., “If he were taller, he would play basketball.” (He is not taller.) Very few people use the subjunctive correctly, however, so “if he was” is widely accepted in colloquial speech.

5 Leon Wieseltier, “Perhaps Culture Is Now the Counterculture: A Defense of the Humanities,” The New Republic(05/28/13).