I Am Not a Machine (Why we practice art and cursive, and how you can do it, too!)

I am not a machine, and neither are my children. That is one of the reasons I took them off the conveyor-belt-style education of public school. It is too easy, however, to slip into conveyor-belt education at home by taking the view that if all the blanks in the workbooks and multiple choice tests are filled in fairly accurately, then my children are educated. A machine could probably do that kind of thing. How, then, can we educate a child to be fully human? What is it that really separates us from being a machine? Classical educators offer this idea: human beings can appreciate and create truth, beauty, and goodness.

The next question is, of course, how should that idea affect education? I propose that we place a little more value on the things that only humans can do. In the high school years, this may mean utilizing more debate and persuasive essays and speeches based on the student’s interpretation of great literature and writings on science, philosophy, and so on. I think Classical Conversations does well in this area already. For the early years, I have a few suggestions. We could emphasize cursive writing. Cursive is being cut from modern education and replaced with typing to save time, but cursive is uniquely human. The writer develops his or her own personal style in cursive writing. It is personal and intimate. It is also an artistic form of expression. In a recent interview, Andrew Pudewa suggested that writing in cursive might encourage more expressive writing because the writer may engage a more artistic part of the brain while writing in cursive. Teaching cursive also communicates to the student that they are capable of creating something beautiful, and it demonstrates that we expect them to create beautiful work because they are a human being, not a machine.

I have spent almost a year discussing with Leigh Bortins and other Classical Conversations moms and graduates how we can make cursive and art easier to integrate into our experience with our children. We have developed a set of books we call PreScripts—‘pre’ meaning to come before and ‘scripts’ meaning to write. So these books are meant to prepare a student for writing. These books provide cursive practice using copy work that is meaningful and drawing lessons that are inspiring and enjoyable.

We have beautiful artwork at our fingertips on the Classical Acts and Facts History Cards. Why not study these works of art in terms of composition and use 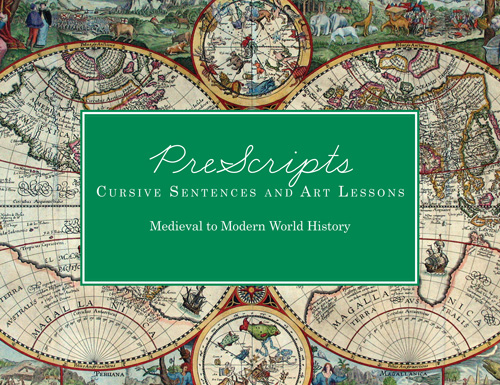 them as subjects for drawing practice? Need a little help with that? I have done the work for you. I went through all the artwork that relates to next year’s history sentences and picked out one element of composition that students can see clearly. For example, students can learn how to create depth, how to create a symmetrical composition, how to show light and shadow, and much more using the artwork on the timeline. I also had an illustrator make a line drawing of the artwork so that your student can use that to draw the timeline card more easily. I paired each art lesson with the corresponding history sentence in cursive. Your student can trace and then write the history sentence in cursive, study the art, and then create his or her own drawing based on the art lesson. I put all of this together in a spiral-bound book that should encourage some study of truth, beauty, and goodness during Cycle 2. This book is called PreScripts Cursive Sentences and Art Lessons: Medieval to Modern World History. 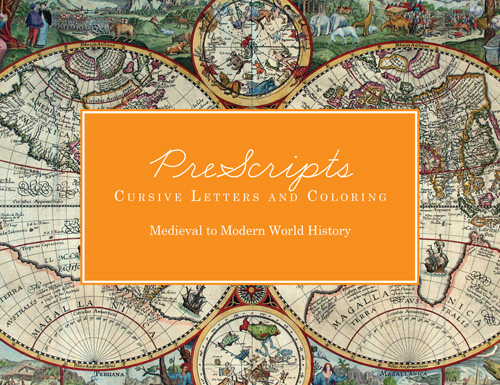 For younger students who really just need practice in the fine motor skills they will need in the future, I put together a book with the line drawings of the history card artwork for them to color. I added the cursive letters for tracing and some simple doodles for them to trace or try to draw on their own (snails, jellyfish, birds, and other things young children will be interested in learning how to draw). This book is called PreScripts Cursive Letters and Coloring: Medieval to Modern World History. Both of these books will correspond to Classical Conversations Cycle 2. 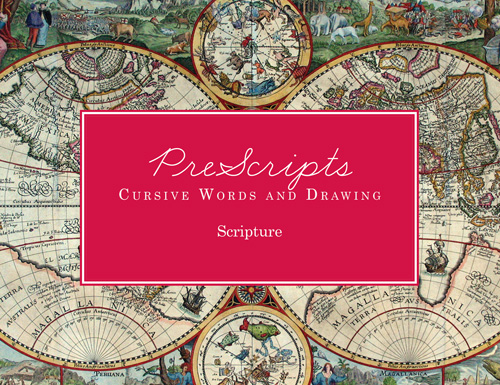 primarily from Proverbs, and easy drawing activities. This book is called PreScripts Cursive Words and Drawing: Scripture. There are three sections in this book. The first section goes through the alphabet giving instructions for forming each letter, a word that begins with that letter, then a verse which begins with that letter. The second section goes through numbers so that students practice writing numbers in cursive, then they trace and write a sentence in which that number appears and gives its significance in the Bible. For example, after writing the number two, they will write in cursive, “The animals boarded the ark two by two.” The third section is the first chapter of James. I chose that section because it is full of beautiful metaphors and encouraging messages of persevering in hardships, which I thought might be helpful to have in mind later, when they get to more challenging classes. All three sections are punctuated with drawing lessons. 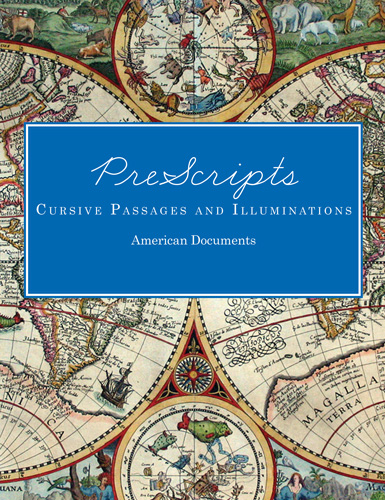 Finally, Jen Greenholt, author of the Classical Conversations Words Aptly Spoken books, carefully chose selections from American Documents. She pulled out inspiring and important paragraphs spanning from the pilgrims’ writings to Ronald Reagan’s
speeches. We put these passages into cursive and added an illumination (a large illustrated capital letter that begins the paragraph) so the student can use the illumination for drawing practice. This book is called PreScripts Cursive Passages and Illuminations: American Documents.

These books are at the printer now and will be available for purchase from ClassicalConversationsBooks.com in January. I hope the PreScripts books will inspire you and your students to practice cursive and drawing, and to appreciate art. And I hope they remind you that we are not machines; we are unique, creative creatures.

For a preview of the PreScripts books, please follow this link to a video which shows sample pages from each book.