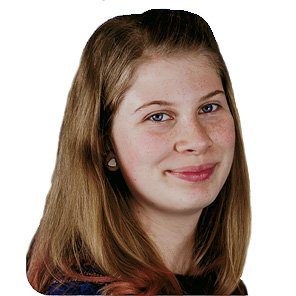 Speller #140 will take the stage Wednesday morning in the nation’s capital as one of 291 finalists to compete in the 90th Scripps National Spelling Bee. Over the weekend the 12-year-old and her whole family drove a thousand miles from Cedar Rapids, Iowa, for “Bee Week.”

Speller #140, otherwise known as Lydia Bitterman, is looking forward to competing with surprising calmness, in part due to her Classical Conversations’ education. The rising Challenge B student is the daughter of Mike and Tara Bitterman and has a younger sister, Holly. While Tara will be Lydia’s Challenge B tutor in the fall at the Marion, Iowa, CC community and has tutored Challenge A for three years, Mike is a project engineer at CCB Packaging in Hiawatha, Iowa.

“I am really looking forward to the Spelling Bee,” Lydia said. “I guess the only thing I’m a little nervous about is Round Three where we could get any word at all from the Merriam-Webster Online Dictionary.”

In truth, Lydia has been in training for the National Spelling Bee most of her life: Her mother helped her learn to read at the age of 3, and she has been a voracious reader ever since. Her mom was also well prepared for this journey: She graduated from Iowa State University with a B.A. in English and a B.A. in Spanish, with teacher licensure in both for grades 5-12.

Lydia has been interested in spelling since she could read.  She was quite young when she began asking her parents test her spelling knowledge, and both of her parents are pretty strong spellers in their own right. She is also very close to her grandpa and grandma, who have traveled with her to D.C., and would have them give her words while spending time with them.

“I really think one of the biggest preparations we have made for this event is participating in Classical Conversations,” Tara said. “Lydia is a memorizer. CC really trained and strengthened her memory muscles. The tools she used to memorize all the facts in Foundations and Essentials, have served her well as she is studying the list of 400 words and their meanings. Also, Latin is a huge help!  Huge!”

For the seventh consecutive year, the National Spelling Bee will be held at the Gaylord National Resort & Convention Center in Maryland’s National Harbor, just south of D.C.

Round One is the computerized Preliminaries Test, which was administrated Tuesday morning. Rounds Two and Three, both oral rounds, will take place Wednesday morning. Round Four, the Semifinals Test, consists of four sections and is computer-delivered at 7 p.m. EDT Wednesday evening. A misspelling in any round and the contestant is eliminated.

Rounds Five and Six, which will determine the finalists, will be held Thursday. Based on scoring from those and the previous rounds, a field of 72 spellers will be whittled down to nine-12 finalists. Round Seven, the final round that will crown the champion(s), will take place in primetime Thursday night, 8:30-10:30.

Other than her remarkable spelling ability, Lydia is a pretty normal kid, according to her mom. She loves science and hates math and loves to read and write in her free time. She enjoys rollerblading, tubing and hanging out with friends from the youth group at Faith Bible Church in Cedar Rapids.

“Lydia is a typical 12-year-old. She is efficient in the use of her time and is a great student overall, but sometimes she needs a little firm guidance from her tutor,” Tara said with a smile.

In order to qualify for the National Spelling Bee, Lydia was sponsored by the Homeschool Assistance Program in Marion, Iowa. She competed at Iowa State University in Ames against 15 other students, and, after only six rounds, won with the word “pinafore.”

“My mom and dad quizzed me every day for months on the Round Two words,” Lydia said, explaining her preparation. “I also studied a couple of resources outside of the list words as well and took the online practice tests provided by Scripps.” She also said that she visualizes every word before she spells it.

Lydia says if she were to win or even place she would save the prize money for college and nursing school. She plans to be a surgical nurse and hopes to also become a published author.

Even if she doesn’t go home with any cash, Lydia says she will still consider the experience a success. “I’ve never been to Washington, D.C., before,” she said. “I am really looking forward to seeing all the monuments and museums. I’m particularly excited to see the Holocaust Museum.”