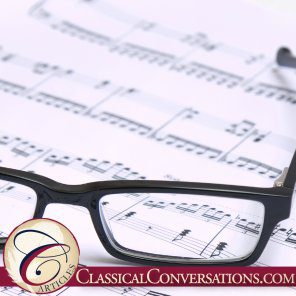 There are few things quite so exhilarating as imparting the gifts of literacy, imagination, and creativity to the freshmen who take Foundations of Musical Skill with me. It opens the world for them to explore anything from Bach to the Beatles (but definitely not Bieber!). Sadly, the number of students who arrive at college with even a modicum of musical literacy––or interest in it––is dwindling. I have noticed an uptick in students who have never studied music prior to college. A recent article by Jon Henschen, “The Tragic Decline of Music Literacy (and Quality),” showed the results of a survey saying that 50 percent of people cannot read music at all, and that 21 percent read it poorly. Only about quarter can read music proficiently.

While I am uncertain about the particulars of this survey, these proportions do match my own experience as a college educator in both the secular and religious setting. With regard to music literacy, I have not found significant differences between those educated publicly and those educated privately or at home. Certainly there is an economic factor, but that is not the sine qua non for music education. The most compelling factor, in my experience, is parental conviction that music is a field worth studying. It seems musical literacy simply is not a priority.

That should strike us as odd. Music is everywhere: we listen to playlists of our favorite singles; we attend concerts of various sorts; soundtracks color our interpretations of film; even our cellphones play jingles when they ring. But more importantly, Christians sing every Sunday morning at church, as have followers of the LORD God for generations. We have examples of Psalms dating back to Moses (Psalm 90) and the deliverance from Egypt (Exodus 15), and music will surely continue into eternity. I think that John Newton rightly understood that when he wrote the final stanza of “Amazing Grace”:

When we’ve been there ten thousand years,

Bright shining as the sun,

Than when we’d first begun.

If singing is so eternally important to the worship of our God, I wonder how the church can work to improve musical literacy? Sunday after Sunday so many sing without understanding the pitches, rhythms, or instrumental choices in their church. This should not be, and has only fairly recently been, the case. In the medieval quadrivium, music––viewed within the field of mathematics––stood alongside geometry, arithmetic, and astronomy, preparing students for higher levels of thinking. Later, churches took the baton and provided music singing and reading classes to their children, especially in the higher liturgical traditions. Just a hundred years ago, having an upright piano in a home was the rule, not the exception. People learned to play and sing their favorite songs by purchasing sheet music at a local music store.

Despite the historical record, though, there is a pressing theological reason to address musical literacy: the supremacy of Christ in all matters of human activity. In the introduction to Jeremy Begbie’s outstanding book Resounding Truth: Christian Wisdom in the World of Music, the author asserts, “For the follower of Christ, there is no ‘exclusion zone,’ no ‘secular’ territory outside of the scope of his saving work, no value-free or neutral area of human life. This applies as much to music as to any other cultural activity.” In other words, ignorance is actually un-christlike.

One might object by saying that a person cannot possibly master everything that’s under the authority of Christ. That’s true. But since we all––regardless of denomination––participate in musical activity as an essential part of Sunday morning worship, should we not engage in meaningful efforts to understand and improve our songs to the Lord? Perhaps we could even become musical Bereans who can analyze and articulate in objective, meaningful ways any areas of questionable musicality in the church. Discussions about preferences are usually fruitless and destructive; imagine living in a church community where musicality could be created and discussed with both skill (Ps. 33:3) and charity. It would be transformative for our families, our churches, and, ultimately, our culture.

If, like me, you have decided to educate your sons and daughters in the Classical Conversations program, you are doing them and the church a great service. I love that my children are learning to read music as a part of their education beginning at age five. Reading the musical language, as simple as it is with tin whistles, will last these students a lifetime. (By the way, I hope you don’t dismiss those cute little instruments. They’re not the end goal of your child’s music education, but their accessibility is well-suited for its purpose and for the development of reading skills!)

As we are raising future leaders in churches and communities, let’s emphasize the importance of musical literacy for God’s people. Realize that, unlike many of the other critically important subjects, music is among the few that we will practice both now and in eternity.

Ryan F. Smith, D.M.A. is a Fellow of Music at New Saint Andrews College where he teaches musicianship classes and applied lessons at the New Saint Andrews Conservatory. Previously, he was Assistant Professor of Music at Coker College, a small liberal arts college in South Carolina, where he was Coordinator of the Music Program and the Community Music Program. In addition to his career in academia, Dr. Smith has served in music ministry at churches in South Carolina, Texas, and Idaho. He holds degrees from Furman University, Dallas Theological Seminary, and the University of South Carolina. He and his wife Abigail have four children. They have participated in Classical Conversations for the past three years.