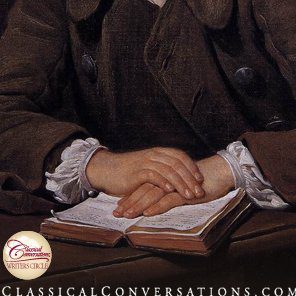 This article is based on a recent interview: Leigh! @ Lunch with Andrew Pudewa. In the interview, Andrew Pudewa and I discussed many things, but the following information really stood out as good, practical thoughts about language arts, spelling, handwriting, and the human brain.

I want to know why a third grade student, for example, is able to master spelling tests, but unable to transfer that to writing? Why does he freeze as he tries to write spelling words that he had mastered? Andrew Pudewa responds:

That is not uncommon at all. It’s not something to be too seriously concerned about, and the reason is—I’ve studied this for years—spelling is not actually a language function of the brain. We tend to think of spelling as one of the language arts. But, as far as the brain is concerned, language is about forming an idea, translating that idea into words you do know, putting those words into a grammatical sequence, and putting grammatically correct sentences or ideas into a logical order. That’s what the brain does in the language area of the brain. Spelling, on the other hand, really has nothing at all to do with any of that. Spelling is the correct retrieval of sequentially stored information: You learn a word, you learn the letters, you put them in the right order, you drill yourself—either verbally, on paper, or through some form of practice—so that you memorize the sequence.

For young children in particular, or children of any age who struggle (sometimes it even happens to us later in life), we’re over in the language part of our brain…we know how to spell a word, but in order to retrieve it we almost have to stop the thought, climb out of the language part of our brain, travel all the way over to the spelling part, search around—almost like a laser beam on a hard disk—until we find that bit of information, pick it up and carry it all the way back over to the language part. For children, by the time they’ve done that, they’ve forgotten what they were going to do with it. This process interrupts their train of thought.

While it is easier, probably, for a child to spell a word on demand, it is not necessarily an instantly transferrable skill. It takes time. Throw handwriting into the mix, which is also not in the language part of the brain, but in the arts part of the brain, and you can really see a child kind of splitting his brain. They’ve got to think of a sentence that makes sense, and find words in their brain that they think they know how to spell, and remember how to make those letters in cursive.

One analogy is that this is kind of like driving. Some of you have taught a teenager how to drive. It’s interesting. When they get in, they are sitting there thinking: “There’s this wheel, there’s these mirrors, there’s this pedal—I can do this and not kill us.” They use every erg of their attentiveness not to kill you, for which you are most grateful. After we’ve been driving for ten years, what happens? We get in and start driving; we can do any number of things. We can set the GPS, surf the radio, listen to a story, read the paper at the stoplights, and drink our lattes. We can do any number of activities and not even notice we are driving the car. That’s what we might call sublimation, or “automatic-ness.” We’ve done an activity enough that the separate variables are now automatic. So for kids, writing on paper is somewhat like that. In the beginning, it’s “there’s the wheel and the pedals, and it’s all I can do to control these things.”’  Whereas, after years, you don’t have to go search for the word, you’ve written it enough times. You don’t have to remember how to make the letters; they are automatic. So you can focus more on the ideas.

That’s why, for young children, copy work is so tremendously valuable. Yet it is something—even worse than memorization—that has been thrown out of modern education. People think it is anti-creative. But, copy work is kind of like driving in the parking lot. It’s a safe place to be paying attention to all these variables and starting to integrate them in an easy, safe, successful way. For young children, daily copy work is an easy way to build their stamina for the composition, the spelling, and the handwriting.

Classical Conversations recognizes this as a need for young children. That is why they are developing the PreScripts program. You can find out more information about the coming-soon program here.

If copy work helps with spelling, what about children with motor skill trouble who need to master handwriting?

Again, it’s about the copy work. It is harder as children get older to inspire them to do the copy work. There are a few things that can be done. One is giving them a calligraphy set. I think this is ideal around ten to thirteen years old. Have them study calligraphy. Boys especially will think, “Look at these cool pen tips, a mechanical thing. If I slow down and be careful, I can actually make these letters look like those letters. This is cool; this is awesome.” I’ve heard stories of boys developing the skill of writing neatly—if they have to—by studying calligraphy. That’s one approach. I took a mercenary approach (not quite bribery, which is paying someone to do something immoral or illegal). I told my kids if they would do every single page of their Latin work neatly in cursive for an entire year, I’d give them $100. This is fascinating because they want the money. I’m hoping they’ll get all the way to the last fourth of it and give up, so I get to keep the money.

I’ve actually met Cheryl Lowe’s sister, who has published New American Cursive, a curriculum. She pinned me down and gave me a one-hour lecture on the importance of cursive. I have to admit I was somewhat converted. I’ve been practicing cursive writing for the last four months. I stopped writing in cursive as soon as they’d let me— ninth grade. I’ve been training myself, and I am almost to the point where I can write faster and more legibly in cursive than in print. And, I think it is a good thing. I think it is opening up a little bit of the artistic element in my writing.

I’ve also noted, I can’t think of a book where you can read the first page and stop and say, “Wow! That is beautiful language.” I can’t think of a book where I can do that, that was written on a computer. When I read Jane Eyre, the first two paragraphs or so, I just stop and say, “That is beautiful language.” Charles Dickens, Jane Austen…these people wrote on paper in cursive. Nobody printed until typewriters came along. I personally doubt that Thomas Jefferson could’ve written the Declaration of Independence on a computer. The artistic element seems to be present with the handwriting. It helps to access the artistic part of the brain. Handwriting is basically an art. That’s essentially what it is. You’re trying to copy a pattern, and copy with such precision you can do it without thinking and internalize these visual patterns. That’s an artistic function.

There was one book, a modern book, that I thought might disprove my theory. Christopher Nolan’s Under the Eye of the Clock is one of the most remarkable books I’ve ever read. It is modern, but he’s a quadriplegic. He wrote with a pencil device strapped to his head, and on a good day he could type a whole sentence or two. So that is completely different.

I do think, when we write on paper there is a certain human function that is taking place. When we can write beautifully, artistically, we can train ourselves to that end. And we have to train ourselves.

I’m pretty well convinced that any human being can train himself to do what any other human being can do—within reason—if he chooses to do so. So it becomes a question of motivation and inner discipline rather than neurology. There are some children, of course, who are so profoundly dysgraphic that it is a neurological impediment. But lots of us can learn to write beautifully and that will help our language side.

Mr. Pudewa has inspired me to begin practicing to write beautifully in cursive again. He has also made me wish I’d worked harder with my children when they were younger. For many, it will be a struggle to develop these skills later in life. For others, I can only recommend books like Classical Conversations PreScripts series to train their children in these skills.