Latin as a Conversation 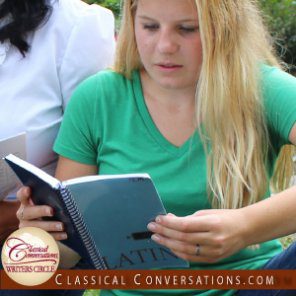 “…if I were asked what, of all the things I was ever taught, has been the greatest practical use to me, I should have to answer the Latin Grammar. An early grounding in the Latin Grammar has these advantages:
1. It is the quickest and easiest way to gain mastery over one’s own language, because it supplies the structure upon which all language is built.”

—Dorothy Sayers, “The Greatest Single Defeat of My Own Latin Education”

Normally, I would be the last person on earth to even whisper a contradiction of anything said or written by Dorothy Sayers. But to her quotation above I would add, with all due reverence, the caveat that this mastery over one’s own language is assumed only if one has mastery over the grammar of said language. The lamentable truth is that this was not the case with my first-ever Classical Conversations Challenge class. With the advent of a Classical Conversations community to our western corner of the world, my students and I leaped, catapulted, surged, and hurtled mad-dashedly (you get the idea) into Challenge II. Yes, Challenge II was to be our first experience and introduction into Classical Conversations. Not Challenge A, B, or even Challenge I. No Foundations, and especially no Essentials.

The difficulties of entering Classical Conversations toward the end rather than the beginning of the trivium became apparent in every strand, but never more so than in Henle Latin. The dictates of studying a foreign language require one to start with what one knows. Presumably, for us it was the English language. But the foundation that was my students’ knowledge of English grammar quickly showed itself to be sifting sand. Throwing a sentence, in English, mind you, on the whiteboard and asking them to identify the parts of speech brought blank, even bewildered expressions. The very term “parts of speech” was foreign to them. I can hear your collected and astonished gasp, “What? Why even my Foundations student knows the eight parts of speech! We memorized them in Cycle 2!” Let me remind you, lest you have forgotten our mad-dashed hurtle, my students did not have the benefit of Foundations, and they especially did not have the benefit of Essentials. So when I asked them to deconstruct a sentence into its constituents, they muddled fairly well through subject and verb, but when it came to the other parts of speech it was clear we had wandered disconcertingly into what Dorothy Sayers would call the precarious “Wood where Things have no Names.”

The Wood is a terrible, foreboding place, without a map or signpost with which to find one’s way. Everything learned there would have to be laboriously thought out and explained from the very beginning. And there wasn’t much time. Grappling with the syntax and construction of a sentence through hard reasoning (and hard labor) reminded me of a scene from the play The Miracle Worker. Your first thought might be of the scene where Annie, the teacher, and her blind student, Helen Keller, once isolated and locked in the dining room, launch the epitome of food fights. But the scene to which I refer comes in the third and final act of the play (you’ll note that the scene, much like the Wood, begins in darkness):

Scene 1. The stage is totally dark, until we see ANNIE and HELEN silhouetted on the bed in the garden house. ANNIE’S voice is audible, very patient, and worn; it has been saying this for a long time.

This is an adjective, a-d-j-e-c-t-i-v-e. It has a name, the name stands for the thing: a describing word that modifies a noun or pronoun. The very word derives from the Latin: ad = to; jacere = to throw, to hurl (a verb we use regularly in our translations, as those nasty Gauls were always hurling their javelins at Caesar’s army). Literally, “adjective” means “to throw to.” Simple as birth to explain—which is why we can do it with our young children beginning in the Essentials program. Not so simple to a high school student who is trying to learn the nuances of Latin alongside those of her mother tongue. The comparison of English to Latin adjectives is fairly straightforward, especially given the fact that they share the same degrees: positive, comparative, and superlative. But it is not so straightforward to a student who is unfamiliar with those “names” of degree.

But I am getting ahead of myself; I’ve been talking about adjectives when the first paradigm a student of Henle Latin encounters is the noun declension. For the most part, this is a task of simple memorization, but we quickly stumble into the Wood with the discussion of gender, number, and case. If you are fortunate to have, or to have had, a child in the Essentials program, you are already comfortable with the term “number” as applied to a noun, and “case” as considered in the application of personal pronouns (nominative, objective, possessive). But my students had little recall of these grammar terms and so we would once again apply our minds to the learning of these “names.” The six cases in Latin kept us loitering in the Wood for some time as we encountered the case of the possessive (genitive), the case of the indirect object (dative), the case of the direct object (accusative), and yes, even the case of the preposition (ablative). Now, I know that a typical Essentials student will memorize some fifty-plus prepositions, but my Challenge students were hard-pressed on our initial journey into the Wood to name five.

By now I can hear most of you veterans of the Essentials program clucking your tongues and wagging your heads, but to convince you that the study of Henle Latin is very similar to the systematic study of the English grammar in Essentials, I will give you the most terrifying example of all: that of the nefarious pronoun. With no fewer than eight pages in the Henle Latin grammar book dedicated to the study of pronouns, nothing could strike more terror in the hearts of my students than Henle’s assignment of yet another grammar rule for a new pronoun declension. Starting with the personal pronouns of first and second declension and then moving on to the possessives, my students were soon meandering bewildered in the Wood amongst reflexives, non-reflexives, and possessives of third person, demonstrative and interrogative pronouns, and finally, the relative. Before I could even discuss the relative pronoun with my students, I had to invoke the relative clause. But what is a clause? It has a name, the name stands for the thing. But they had never learned, or had never learned for a duration, over time, those names. Not the way you learn them in Essentials.

Act three, scene one from The Miracle Worker opens fittingly in darkness. The metaphor is not lost on its audience—the teacher is devoted, but struggling, seemingly in vain, to teach her deaf and blind pupil by repetition, over and over and over again, that “it” has a name, the name stands for the thing. But then she informs, “There’s only one way out, for you, and it’s language.”