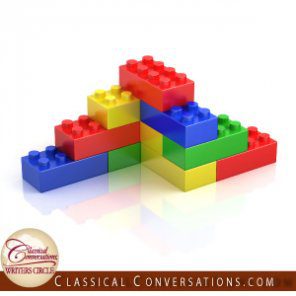 It’s December; it’s Christmas. So, I’m thinking about gifts and toys and all of the fun things that children like and what they can do with those things. Last week, after my family decorated our Christmas tree, my fourteen-year-old daughter pulled out a set of Lincoln Logs and began constructing her dream home, a log cabin. It had lots of rooms, a fire pit outside for family time, a teepee for camping in the backyard, and a slide for fun. At fourteen years old, it has been awhile since she’s done something like this. It elicited nostalgia from me and I began thinking about the great creations my daughter and two sons used to make with their Lincoln Logs or Legos.

Oddly enough, those creations serve as a kind of analogy for what we are doing in the very act of homeschooling our children. Sure, the analogy came to mind for me because it is Christmastime and I was thinking about gifts, but it could just as easily explain what we are doing at any given time of the year.

When I went to school, I learned the three tools of learning which comprise modern education: cram, test, and dump. I learned to memorize, the night before a test, all of the information I might be tested on, then I would go into class the next day, take the test, then dump everything I’d learned to make room for the next test. Modern education made me a master of short-term memory. This skill has even led folks to confuse me for having an eidetic memory, but I don’t. I generally forget everything I’ve learned after a few days or weeks.

The education my children are receiving utilizes three very different tools of learning: grammar, dialectic, and rhetoric. They begin with grammar (memorizing facts and information which make up a language or subject), then they use the dialectic tool (contemplating and debating that information to discover relationships and truths from it), and then they use the rhetoric tool (communicating and living out those truths). It is very different because the information they learn continues to build on itself, unlike how I learned: dumping the information to make room for new information, as if the brain has a limited amount of space for storage.

The Lincoln Logs or Legos are very similar in this regard. The log or block all by itself is essentially meaningless. It has a purpose, but that purpose is connected to the other logs or blocks that accompany it. Alone, it becomes nothing more than a projectile with which to assault others. Each block, however, is not meant to exist alone. One is meant to serve as the base or foundation for the next. The next builds upon the previous and so on for each block after it, until a creation comes into existence. When the creation is complete, the child decorates it with decorative elements—like my daughter’s fire pit, teepee, slide, and landscaping. Its beauty then makes it a desirable place to live or vacation.

Modern education gave me separate blocks to play with, but never to put together. The classical education my children are receiving takes those blocks and puts them together in relationship, to build something meaningful and beautiful. Take, for example, American history. My middle son memorized the presidents as well as a history timeline and sentences pertaining to American history. He memorized them and practiced them over and over again until he knew them. He didn’t cram, test, and dump them. To this day, he remembers much of what he practiced in Foundations. When he went through Challenge I, he studied American documents and literature. In that study, he was able to discuss and make connections between the people, facts, and events that he had memorized in Foundations and begin discovering truths about them from those relationships. Today, he is in Challenge III, studying American history, and—through continued discussion and contemplation—he is able to make some determinations about the actions of our presidents. Not only does he come to conclusions about whether a particular president’s actions were Constitutional or not, he is also able to communicate that truth to others.

Foundations, for any child, is not just a bunch of Lego blocks or Lincoln Logs dumped onto the floor; it is the facts they learn as grammar which will serve as the blocks they build into relationships using the tool of dialectic in Challenges A, B, and I. These facts and relationships will then become the truths they learn to communicate and live out using the tool of rhetoric in Challenges II, III, and IV.

Oh, the joy of learning! It’s amazing the little things even an old dad like me can learn from watching a young girl play with Lincoln Logs.