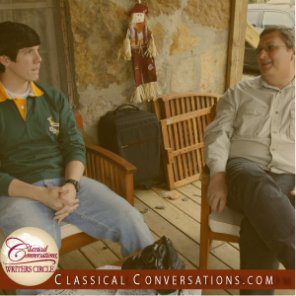 All’s well that ends well? I hope so, because this academic year is ending very well, but that is not to say that the entire year has been smooth sailing. There have been some choppy seas on our Challenge II journey—even a couple of storms. After one such storm, we checked our compass to see if we were still headed in the right direction and we found that we had charted a new course—a better course, for we were heading toward a better destination—a destination where not only the work was accomplished, but also where my daughter and I became better friends.

As I look back over the year that my daughter, my wife, and I have spent completing Challenge II, I can think of several minor course corrections, but only one major one. By mid-November, an overarching ambivalence toward schoolwork had turned into outright antagonism. Work was not being accomplished in a timely fashion and the work that was getting done was comfortably mediocre. Whatever it was we were doing, we were not doing it right, so it seemed to be a good time to stop what we were doing and assess where we went wrong.

We discovered that all three of us were complicit in this educational collapse. My wife and I realized that we had stopped being our daughter’s teachers and had simply been satisfied with being her administrators—we assigned the work and she was supposed to do it. When it wasn’t done, we assessed her failure and made her fix it. Regrettably, we had stopped helping her fix it. Even worse, we had stopped making sure she was heading in the right direction when she began each assignment. We had fallen prey to the idea that if an assignment was in the Challenge Guide, then she was ready to both understand and complete it.

However, when Classical Conversations says that you are the parent and you decide which assignments your students are to complete, they mean it. One Challenge Guide cannot “fit all,” but, of course, not every student can have their own customized Challenge Guide printed. How do we resolve this problem? Even though every student cannot have a custom-fitted Challenge Guide, every student does have a custom-fitted parent. That is the whole point of homeschooling, and that is exactly what my wife and I forgot. We blindly required every assignment in the Guide, but the ones for which our daughter was not ready were more than she could bear and they had been crushing her.

So, step one of our new direction was to assess the assignments more carefully to see if they should be included in her current assignments. Step two was to help her accomplish the ones that we chose to assign—not to help her by doing the work on her behalf, but to help her by working alongside her.

You get the idea. We got back in the trenches, because that is where our daughter was. We repented; she repented. We got back to doing our job, she got back to doing hers, and you know what we found? We found that school doesn’t have to be a pain or a problem. It is always work, but hey, we were created to work. And by working together, school can even become a joy.

All this reminds me that God has called us, not to be slaves, but to be sons and as sons, heirs (Galatians 4:7). My relationship with my daughter had become one of a master (dad) to a slave (student), but that is not the analogy God uses for His people. He uses the analogy of family. I am my daughter’s father, which according to Galatians has a much deeper and longer lasting relationship than a master to a slave. I am not only to tell her what to do as a student, I am to love her as my daughter. I am not only to assign her to a task, I am to give myself as an inheritance to help her achieve success.

(This entire article was approved for publication by both my wife and my daughter.)