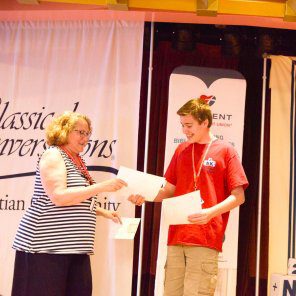 To the uninitiated ear, the answers sound like gibberish—faster than an auctioneer. But Tyler not only knows exactly what he’s saying, he’s also performing dozens of math equations in his head to get those answers. All in 60 seconds.

Tyler was one of 16 finalists in the National Number Knockout (N2K) competition held May 1 during a five-day cruise to the Bahamas aboard the Carnival cruise ship Liberty. The competition began with 16 10-14-year-old students from all over the country. When three lightning-fast rounds were over, Tyler was the sole competitor left standing. For his proud mom, it wasn’t entirely unexpected since Tyler was a finalist in 2018 as well.

“It was very surprising and exciting!” Tyler said after winning. “Number Knockout is really challenging, and it keeps me enthusiastic about math! It’s been my favorite activity over the years, and it is awesome that I actually won!”

Tyler said the favorite part of the competition for him was practicing and competing with others who also love Number Knockout. He added that his plans for the $10,000 prize include buying a giant bag of Reese’s and saving the rest for college.

Tyler is homeschooled by his parents, Clark and Janice Turner, and he has two older siblings. Math and science are his favorite school subjects, and he loves swimming, competitive speech, and playing the violin.

Number Knockout is a mental math game played with three dice and a playing grid of 36 squares, each containing a number. Students are given 60 seconds to generate as many equations as possible with unique answers from the numbers on the dice using addition, subtraction, multiplication, division, roots, and exponents, in such a way that the result is a number on the board.

The National Number Knockout competition is hosted by Classical Conversations®, Inc., a classical education resource used by homeschoolers in all 50 states and 30 foreign countries. Classical Conversations now has more than 125,000 students enrolled in its tutoring programs. N2K is open to any student, ages 10-14.

The competition was sponsored by Thrivent Federal Credit Union, one of the largest faith-based credit unions in the nation. TFCU is headquartered in Minneapolis, Minnesota, and Appleton, Wisconsin, and has nearly 53,000 members.