Music’s Connection to Math and Nature (Excerpted from The Neglected Muse: Why Music Is an Essential Liberal Art [Part II*]) 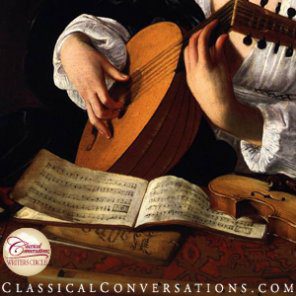 Music, amazing in its power over our emotions and character, is even more amazing because it is eminently capable of being studied. Traditionally, music is one of the seven so-called “liberal arts.” Liberal, here, has nothing to do with its current, political usage. It is not a synonym for progressive. Rather, it is derived from the Latin liber, meaning free, and is best associated with words like liberate. The liberal arts constitute the knowledge that free people need to guide them in their decision-making at home, at work, as neighbors, and as citizens. The system of seven liberal arts was first developed and taught in the Middle Ages and has continued to strongly influence education down to the present day. The liberal arts are divided into a trivium (which is Latin for the three ways or roads) and a quadrivium (meaning four ways or roads). The trivium consists of the arts of grammar, logic, and rhetoric; the quadrivium consists of the arts of arithmetic, geometry, astronomy, and music. The former develops the arts of language, the latter the arts of measurement. Together they provide a template for a so-called “liberal education,” whose end is not a technically trained professional, but an educated human being.

As a quadrivial art, music has an exalted placement that points to the long acknowledged bond that music has with number and nature, and sharply distinguishes it from the visual arts. The connection between music and mathematics was established by the legendary Greek, Pythagoras. Pythagoras discovered that the most commonly used (and most singable) musical intervals had intelligible mathematical counterparts.

Pythagoras discovered this connection without the knowledge of frequencies: He simply divided a string in half and, to his utter amazement, heard that this division produced the octave. Likewise, he discovered that when one string is two-thirds the length of another, it will produce a higher note that fits another common musical interval, a perfect fifth (the first melodic interval in “Twinkle, Twinkle, Little Star”). This discovery—that notes that sound good together can be represented mathematically with ratios of small whole numbers—was far-reaching; it suggested that great music was not just a matter of taste and convention, but was grounded in the very nature of the physical universe—which could explain why humans respond to it. Our sensuous experience of music might, in fact, be a deep if unconscious response to an intelligible order: The most common and singable musical intervals might be ratios that we automatically sense. Moreover, it suggested the possibility of a mathematical physics. If precise, discoverable, numerical ratios were at work in the relationships between notes separated by common musical intervals, then wouldn’t they also be at work in, say, the relationship between distance and the time it takes for an object to fall to the ground?

It is easy, and fun, to recreate the Pythagorean discovery by experimenting with different divisions of a string on a device known as a sonometer or “measurer of sound.” Sometimes it is called a monochord because you need only one string to do Pythagorean experiments. But the device works best when it has two strings: one that is divided and another that is not, so that it can serve as a reference pitch. A sonometer is very easy to make, as I discovered when my son and I constructed one for his high school science project. All you need is a thick board, metal strings, a few screws, two small bridges to anchor the strings at both ends, a small moveable “bridge” that is used to divide the string at various points, and a meter stick to take measurements. High school students can use this simple musical instrument to verify that the most common musical intervals do indeed correspond to ratios of small whole numbers. They can do this in two ways. One way is to measure off a length of the string that corresponds to a given ratio (say, 3:2, or two-thirds the length of the undivided string), move the bridge into place, and then pluck the resulting partial length (the two-thirds length) to hear if the predicted interval sounds (the perfect fifth). The other way is for the students to move the bridge around under the string, plucking and listening at each point, until they reach what sounds like a given interval and then use a meter stick to determine the ratio into which the string has been divided. The octave is especially interesting because of its simplicity and familiarity. Knowing that its ratio is 2:1, students can divide a string exactly in half without ever using a visual measuring device. All they have to do is listen for the division that sings the octave.

This simple Pythagorean experiment is a real treat for students, who invariably experience amazement at the mathematical grounding of music in nature. The experience helps their learning in a number of ways. It makes them realize that the musical intervals and the scale acquire a precise definition only through the power of mathematics (ratios); that the practical problem of tuning a stringed instrument like a guitar or a piano is a mathematical problem of getting different ratios to fit with one another in a consistent scale; and that the tuning they have inherited (the 12-toned equal temperament in which an octave is divided into 12 equal half-steps) is the product of a rich, complex history marked by incredible ingenuity and laborious effort.