My Classical Journey with the Magi 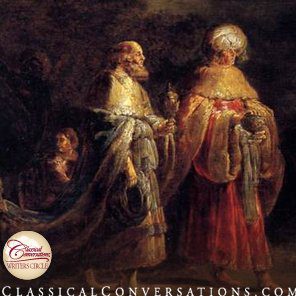 Last year, I had the opportunity to study T.S. Eliot’s poem “The Journey of the Magi” with a high school student whom I was tutoring. I had read the poem before and my graduate school roommate was an Eliot aficionado, so I felt reasonably confident as I approached the poem. We would talk about alliteration and unrhymed verse, T.S. Eliot’s classical roots, and the loss of certainty that characterizes modernist poetry. My student would identify the rhetorical figures in the poem and write a paper about them. Even better, when the discussion turned to the famously difficult questions “why?” and “so what?”, I could fall silent, because as a tutor using the dialectic model, my job was to ask the questions, not to answer them.

My plan was neat, impersonal, and clinical; however, as so often happens when you study great literature, my agenda moved quietly to the backseat when I embarked on my personal journey with the magi.

The first week, we began with the grammar of literary analysis. We reviewed the definitions of rhyme and meter, alliteration and consonance, end-stopped lines and enjambment, blank verse and free verse. Then we looked at examples of these literary devices and styles in famous poems by Shakespeare, Keats, and Dickinson. We practiced reading the poems aloud and counting out the number of stressed syllables in each line until my student could tell the difference between iambic pentameter and iambic tetrameter. Then we turned to Eliot. After a brief discussion of Eliot’s background and historical context, I sent my student home with a list of rhetorical techniques that he might find in Eliot’s poem. His assignment, before we met again, was to read “Journey of the Magi” and then highlight and identify major devices used in it.

My student returned for the second week with a printed copy of the poem, which was covered in highlighting and penciled notes. So far, everything was going according to my lesson plan. We began a dialectic discussion using questions to generate and organize my student’s ideas about the poem.

• What is happening in this poem on the level of plot, character, or conflict?

• What are some of the main literary devices you see in this poem?

• Where do you see those devices present?

• What is the source of the storyline in this poem?

• Does Eliot conform to a specific poetic form, meter, or rhyme?

• How is this poem different from poems by Shakespeare or Dickinson?

• How is this poem similar to other modernist poems you have read?

• How is this poem different from other accounts of the Christmas story?

• What was going on in the world when T.S. Eliot was writing this poem?

• Do you see elements of this poem that might be a response to world events?

• What was Eliot’s situation at the time he wrote this poem?

• Do you see elements that might have been influenced by his experiences?

• How do you think Eliot’s historical context informed the style of his poem and the way he wrote about the Christmas story?

• How do you think Eliot’s Christian faith informed the way he related to other modernist poets?

• How do the rhetorical devices Eliot chose affect the meaning of this poem?

In this last set of questions, we reached the dreaded “why” and for a moment, the rapid-fire responses decelerated. My student had identified major devices in the poem. He knew part of what Eliot was doing, but he had yet to figure out why or to what end. Why write this poem in this particular way? With our discussion hanging from this pivotal point, we reached the end of our second session.

I left the public library where we met with a vague sense of discomfort. Everything was progressing according to plan, but I had reached the end of my prepared lesson, and we were now in uncharted territory. For the last few questions—the ones that mattered—I had no answers. We would have to wrestle our way through them together.

The third week, when we met again, my student was ready to begin writing, sharing his ideas rhetorically with his family and with me. In preparation, he had grouped his ideas about Eliot’s poem into categories and organized the categories into a basic outline. He would talk about the sound of the poem and then the shape of it, discussing in turn alliteration, consonance, anaphora, free verse, and enjambment. He had the rough sketch of four body paragraphs, but the glue was missing and he knew it. The “so what?” question hovered over both of us, but this time I let him take the lead: he had done the groundwork and now I was the student as much as he was.

At first, our conversation circled around the concepts of birth and death, gentle and sharp alliterative sounds, unity and fragmentation. Then ever so slowly, his thoughts began to catch fire, igniting his words. Here was a familiar story, the Christmas story, which modernists might find increasingly difficult to believe in light of the horrors of war experienced by the world. What could a baby’s birth possibly offer to a world ravaged by poisoned gas and exploding planes? That tension between softness and harshness, beauty and ugliness, was everywhere in Eliot’s poem.

But, he mused, what if a seeming contradiction were the solution as well as the problem? He focused on one line of the poem: the magi had “seen birth and death, / But had thought they were different.” How could birth and death be the same thing? Well, this birth carried in it the promise of a death that would change everything, and the magi instinctively knew it. Faced with the reality of the Savior’s birth, the magi understood that their comfortable world could never be the same, nor would they want it to. “I should be glad of another death,” the narrator concludes—a death to self, a death of the old ways of life, a death that destroyed the divide between God and man. Christ’s birth could not be separated from His death and that tension, so eloquently expressed in Eliot’s poem, was precisely what allowed the Christmas story to speak to a hurting world.

When my student paused for breath and looked to me for feedback, I was silent, still mesmerized by the journey we had just taken. There is nothing quite like the experience of sitting across from a young rhetorician. It is like teaching a camper how to build a fire: gathering kindling alongside him, training him to arrange it in an orderly fashion, and then handing him tinder and a flint, all the while moving gradually from an active to a passive role, until finally it is your turn to be warmed by his fire.

Thanks to my student’s hard work and the companionship of Eliot’s magi, the resulting blaze was magnificent indeed.