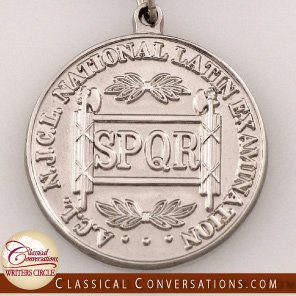 If your student is taking the National Latin Exam, here are a few tips which may help them:

1) Make sure your student is acquainted with maps of the Roman Empire and of ancient Italy. I like the maps from http://www.bible-history.com/maps/romanempire/. Your student needs to know the major cities (such as Rome, Pompeii, Brundisium, and Ostia), as well important geographical features (such as the Alps, Apennine Mountains, seas, and rivers).

3) If your student is in Latin III or higher, he or she should review the lives of the Roman writers (such as Virgil, Caesar, Pliny—the Elder and Younger—and Cicero).

4) Each level has a reading passage and multiple choice questions. Because the test is an hour long, students do not have time to translate the passage exactly. They need to use the multiple choice questions, the glossed words, and the title to help them. The questions cite the line numbers where the answer is found. Students can use the choices for each question to figure out what the passage says. (They need to know how to translate Latin to do this; however, good test taking skills come into play here.)

5) The grammar questions will never have incorrect Latin. So, if you have choices such as A) senatores, B) senatorum, C) senatoris, and D) senatoribus for a question, then you know that this noun must be Third Declension. This helps greatly when you do not know the vocabulary!

6) Have your student take the practice tests from http://www.nle.org/exams.html#previousexam. As they do, they should notice that there are stock questions. There will be a question about the verb sumand a question about dative with verbs of giving, showing, and telling (I have noticed dedit quite a bit on the test in previous years).

7) Finally, here is a quick list of Latin phrases used in English as well as some oral Latin that could be used in the classroom:

• Mea culpa (used in many Christian prayers and confession): “my fault”

• E pluribus unum (motto of the United States of America): “one out of many”

• Pax vobiscum (a farewell greeting): “peace be with you”

• Tempus fugit (from Roman writer Virgil, Georgica; Challenge IV students read Virgil’s Aeneid in the Exposition and Composition seminar as well as read and translate The Aeneid from the Latin in Henle IV for the Grammar seminar): “time flies”

• Animus/mens sana in corpore sano (originally a saying from the pre-Socratic Greek philosopher, Thales (Challenge I and III students will study the Greek philosophers in the Rhetoric seminar); also from Roman poet Juvenal, Satire X): “a healthy mind in a healthy body”

• Ad nauseam (a type of argument in Formal Logic called argumentum ad nauseum, which is a fallacy that depends upon proving one’s point by repetition; Challenge students will study logic in the Rhetoric seminars in Challenge B, II, and III): “to the point of disgust”

• Veni, Vidi, Vici (from the Greek historian Plutarch, Lives of the Noble Greeks and Romans, attributed to Caesar upon one of his military victories): “I came, I saw, I conquered”

• Alea iacta est (from Suetonius’ history, Twelve Caesars: quoting Julius Caesar’s words as he crossed the Rubicon, 49 BC): “The die has been cast”

• “Et tu, Brute” (the words of Caesar as he is assassinated, from Shakespeare’s Julius Caesar; Challenge III students will read this Shakespeare tragedy in the Exposition and Composition seminar): “And you, Brutus!”

• Quod erat demonstrandum (often seen in geometrical proofs as “Q.E.D”): “that which had to be proven”

Nota Bene: This is a test which, while it can help your student, will not hurt your student. It is a great exercise in Latin, in test taking skills, and in study skills. It behooves your student to do well for so many reasons such as the satisfaction of a job well done and a validation for their Latin curriculum for college. Also, as seniors, students who do well are able to apply for a scholarship.

For additional information and tips related to the National Latin Exam read another of Kathy’s articles. Click here.