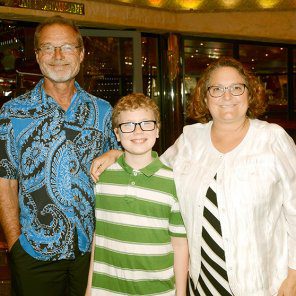 Rochester, Minnesota—To the uninitiated ear, the answers sound like gibberish—faster than an auctioneer. But Ethan Gates, 12, of Rochester, not only knows exactly what he’s saying, he’s also performing dozens of math equations in his head to get those answers. All in 60 seconds.

Ethan can perform these mental math gymnastics so fast, in fact, that he won the National Number Knockout championship May 2, along with a $10,000 grand prize. His mother, Amber, won $2,000 as his teacher.

“This is so awesome, I can’t believe it!” Ethan said following his victory. “N2K has radically changed my view of mathematics and exponentially inspired my love for mental math!” Ethan said he plans to save his winnings and watch them “multiply.”

Ethan was one of 16 finalists in the National Number Knockout (N2K) competition held May 2 during a five-day cruise to the Bahamas aboard the Carnival cruise ship Liberty. The competition began with 16 10-14-year-old students from all over the country. When three lightning-fast rounds were over, Ethan was the sole competitor left standing.

Ethan is the middle of five children and went on the cruise with his whole family. He enjoys playing soccer and even volunteers at his local library, but his first love is N2K. He was also a national finalist in 2016, and his competitors said he was the odds-on favorite to win this year.

“I love the speed of the game, as well as the continual challenge as the boards increase in difficulty,” Ethan explained. “Math is my favorite subject; you probably figured that out, right? And I also like Mathcounts, Rubik’s Cube and Junior Bible Quiz at church.”

CC provides resources, guidance and a community for a home school curriculum using classical education in three developmental stages: grammar, dialectic and rhetoric, and taught from a Christian worldview, according to co-founder, Leigh Bortins, who, along with her husband, Rob, funds the N2K competition. She says CC supports homeschooling parents by cultivating the love of learning through a Christian worldview in fellowship with other families. She believes there are three keys to a great education: classical, Christian and community.