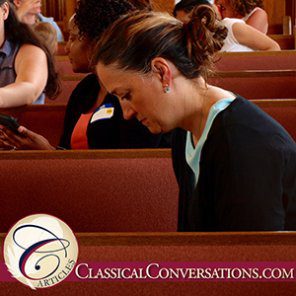 As I sat there repeating (less elegantly than the teacher) short phrases like “How are you?” and “My name is Tifany” in Spanish, a part of me felt truly inadequate. My intention in taking a Spanish class was to see how nine years of Classical Conversations Latin would aid me in attempting to learn the language. Growing up in Southern California and having spent years working in the restaurant industry, I had learned how to count to ten and memorized some short phrases like “Pan para dos, por favor” as well as some important words like “andele” and “tortuga.” My daughter, having gone through a Dora phase when she was younger, was the means by which a few more vocabulary words were added to the little Spanish dictionary in my head. And like most people in the United States, I have sung haphazardly along to “La Bamba,” “Macarena,” and “Feliz Navidad.”

I figured an introductory course in conversational Spanish was a good place to start. So, after paying $60 for a six-week class that met weekly at our city’s community center, I began my journey toward learning another language. With the German I learned growing up as the daughter of an immigrant as well as the Latin I had been attempting alongside my children, I figured I had a few extra tools in my belt that might help. After all, don’t most people believe the adage that it’s easier to learn a new language if you’ve already learned another?

I can now say without a doubt that my time in Classical Conversations has helped me in the most fascinating and unexpected way. I had honestly thought that just my previous exposure to the German and Latin languages would help me the most, but instead, what I found most helpful was the structure of grammar I had learned by attending and tutoring Essentials.

Does that give you a bit of hope too? I mean, as much as I have a decent working knowledge of German (better than Latin, that’s for sure), I know English much better. Through Essentials I have learned how language is structured. Essentials (and the Foundations memory work) has taught me the parts of speech, how they operate, and how they work together to form sentences.

I know that to be a sentence, a statement must have five specific things: capital letter, end mark, subject, verb, and make complete sense. I know that sentences also have a purpose: declarative, interrogative, imperative, exclamatory. They also have structures (Simple, Compound, Complex, Compound-Complex) and patterns (S-VI, S-VT-DO, S-VL-PN, S-VL-PA, S-VT-IO-DO, S-VT-DO-OCN, S-VT-DO, OCA) by which they are known. And I found myself practicing what I knew about the grammar of my own language to understand an unfamiliar language.

And it’s what we do as humans, isn’t it? We start with what we know and use that knowledge to try to understand that which we do not know. I can confidently approach each Spanish sentence (indicated by the capital letter that starts the sentence and the end mark that completes it) knowing there will be a subject noun/pronoun and a verb. I am also proceeding with the assumption that the teacher is not going to give me a nonsense sentence to throw me off when I attempt to learn the language.

So, through the course of the six weeks, I memorized vocabulary and conjugated the most common regular and irregular verbs. I jotted them down in my notebook and repeated them in the car while running around doing errands. “yo, tu, el, ella, nosotros, vostoros, ellos, ellas.”  Sure, the “formal you” “usted/ustede” was a little different, but it was just one more pronoun to be added to the list of personal pronouns; using what I knew about the structure of my own language gave me a huge advantage in class. Interestingly, the advantage was one that I shared more easily with many of the older students in class.

My classmates’ ages ranged from late twenties to early seventies. Half of the class was “retirado” or retired, and I found it was much easier to work with them than the younger students on in-class assignments. When I asked why we say “me gusta” versus “yo gusta” (“yo” is the nominative pronoun) they explained that “me” was an indirect object pronoun and that we were really saying “to me it is pleasing” versus “I like.” It was a conversation that my younger counterparts couldn’t follow, because they didn’t even know what an indirect pronoun was.

The divide between what our older generation was taught in grade school and what today’s generation is being taught was further driven home when I was translating the conjugation of “ser,” the infinitive “to be” in class. As I wrote “I, you, he/she/it” next to “yo, tu, el/ella,” my thirty-something tablemate asked me what I was doing. As I explained I was just writing down the nominative pronouns, he stared blankly back at me, and then sheepishly asked if he could copy them down when I was finished.

Today I am thrilled to realize that through educating my own children with Classical Conversations, I can reclaim the key of grammar and use it to unlock languages that I thought might be beyond reach at my age.

In fact, our Parent Practicum theme this year is “The Art of Grammar, Unlocking Languages,” and over the next few months, I’ll be sharing my journey to learning Spanish and reclaiming German using not only English grammar, but also Latin. There’s a reason why people much wiser than I have called Latin the key to unlocking Romantic languages, and I look forward to discovering how.