One More Conversation About Great Artists 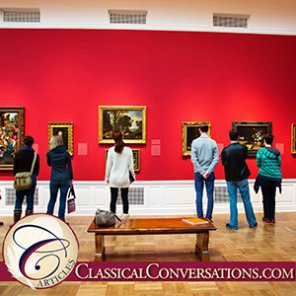 Foundations Directors may be breathing a sigh of relief over the completion of six weeks of children painting in the church building. While I, too, am glad we managed to retain favor with our host church by not tracking paint down the carpeted hall, I would enjoy talking about great artists for another six months. Why my fascination with art? Partly because I am a seeker of beauty, but also because art gives us personal insight into particular cultures and their worldviews—and the more we understand the worldviews of history, the better we understand our own culture, and hopefully become better ambassadors for Christ in it.aeffer highlighted it in his DVD series, “How Should We Then Live?” Rembrandt painted a version of Christ’s crucifixion unlike any other. In it, Christ is on the cross and the cross is being lifted up into place, but in the lower portion of the painting Rembrandt himself is helping to raise the cross. Why would Rembrandt do this? To show the world, or perhaps confess to himself, that he had a hand in crucifying Christ. Christ died for Rembrandt’s own sins. Rembrandt was a post-reformation Christian.

The Reformers realized that during the Middle Ages the church destroyed the importance of man. The church leaders of the Middle Ages emphasized heavenly ideals so much they began to believe anything “earthly” was sinful. This inspired many men and women to give up human relationships and enter monasteries and convents. While studying the book of Romans, Martin Luther realized that God had created the earth and everything in it, and declared it all good…even man. Because of the fall, man is prone to sin, but since man was created in the image of God, there is some good in man—mainly  the capacity to love. The artwork of the Middle Ages concentrated only on idealistic, heavenly images (remember Michelangelo?).   After the Reformation, artists began to capture beauty in humanity. That’s why Rembrandt painted people with expressions of anger or surprise:   Their flaws and emotions make them human, but also make them capable of loving and being loved by God. The Reformation began a period of great freedom for artists without losing sight of the Bible and absolute values.

The second artist we studied was Carl Linnaeus, who also realized that God created nature and the laws that govern nature. He saw God’s handiwork in plants and, even as a boy, loved to draw detailed, accurate pictures of plants. We can use drawing to focus our attention on God’s intricate and beautiful designs in nature. When we study a plant scientifically, and try to draw every detail, we are recording what God designed. It was Linnaeus’s belief in the creator God that led him to study details so carefully, eventually discovering the organizational principles at work in nature. When we study a plant or flower closely with our children, how can we help but proclaim, “Isn’t God amazing?”

Gainsborough also studied the natural world. He loved to paint landscapes. In order to make a living, he needed to paint portraits, so he painted his portraits on landscapes. His landscapes weren’t a scientific recording of God’s handiwork—as Linnaeus’ had been; Gainsborough added a dreaminess and imagination to his landscapes. We can tell from his portraiture, though, that he appreciated humanity. His subjects, even royalty, were posed casually, often looking lovingly at each other. I often think that the families he painted must have loved each other very much; at least they did in the moments that Gainsborough captured.

These three post-reformation artists bring us up to the late 1700s. Then, we go to France, which had experienced a revolution that rocked the world. I hate to admit that the French were inspired by the American Revolution, because theirs took such a disturbing twist. Both countries needed to break away from their kings; the French guillotined their king and all the royals, but then, they took it a step further and beheaded anyone who had held authority—including  the clergy. They rededicated the churches as “temples to reason,” and essentially removed God and the Bible from authority, too. Of course, this new worldview showed in their art. I cannot verify the personal beliefs of the particular artists we study, but I believe a lack of belief in God shows in Impressionism. They weren’t interested in how God had created the world; all that mattered was their personal impressions of reality.

How can a culture which denies the existence of God create something as beautiful as Monet’s water lilies, or Degas’ dancers, or Morisot’s mother with her child? It reminds me of the promise that God uses all things for good for those who love Him. Even out of such a troubled time and place as post-revolution France, artists still produced beautiful works of art. Perhaps when your worldview is so far from the Truth, you have to create a dream world much like the Impressionists’ paintings of blurred lines and dancing light.

If you would like to learn more about art history and worldviews, I highly recommend Francis Schaeffer’s DVD series, “How Should We Then Live?” It’s available from the CC Bookstore.