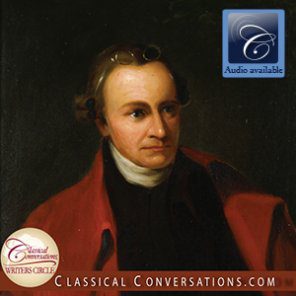 In the years leading up to the Revolutionary War, the debate raged over whether to fight and leave Great Britain, or to keep trying to work things out. (Sounds like a great issue for an ANI chart!) Patrick Henry stood up in St. John’s Church in Richmond, Virginia and made his famous speech which is best remembered for its stirring last line: “As for me, give me liberty or give me death!” As I explored this speech with my Challenge I students, we recognized that it artfully drew together our studies of debate, American government, and composition. We saw how Henry addressed the four stock issues—topicality, significance, inherency, and solvency—that we had just covered in our debate strand. Looking over the Rhetoric Trivium Table, we noticed his outstanding use of the rhetorical arrangements of exordium, narration, division, confirmation, refutation, and amplification. We were struck by Patrick Henry’s ability to call upon his classical training using clear logic within a familiar structure to persuade his fellow countrymen to act.

First, we may assume that his speech was topical which means the speech was on-topic. The delegates were debating how to respond to Britain, so the resolution could have been: Resolved, that the relationship between the colonies and Britain be significantly reformed. Patrick Henry answered the question affirmatively. In vivid language, he described the harm of continuing the status quo which covered the stock issue of significance, or showing how big the problem was. Portraying the substantial need for change, he declared, “I consider it as nothing less than a question of freedom or slavery. There is no longer any room for hope…Gentlemen may cry, Peace, Peace but there is no peace.”

Next, he gave many examples of inherency, showing how their current methods of dealing with Britain were not solving the problems between them. The problems were inherent in the relationship between the colony and the mother country. Only a complete change in policy would resolve things. “I have but one lamp by which my feet are guided; and that is the lamp of experience…. And judging by the past, I wish to know what there has been in the conduct of the British ministry for the last ten years, to justify those hopes with which gentlemen have been pleased to solace themselves…?” He proceeded to list the ways in which all the petitions, arguments, supplications, and entreaties had been disregarded and then detailed Britain’s current preparations for war. “Are fleets and armies necessary to a work of love and reconciliation?” he asks.

Last, Mr. Henry brought forth his plan, known as solvency in debate: “If we wish to be free…we must fight!…An appeal to arms and to the God of Hosts is all that is left us!” He gave more details: “We shall not fight our battles alone. There is a just God who presides over the destinies of nations; and who will raise up friends to fight our battles for us. The battle, sir, is not to the strong alone; it is to the vigilant, the active, the brave.”

All of this was neatly packaged as a 1AC, the first affirmative speech in a policy debate, arranged as any good rhetorical speech. The exordium is an opener that draws in the listeners. Narration states the issue, and gives any background necessary. In the division, disagreements are noted and a road map, or thesis is stated. In the confirmation all the proofs are expounded. A rebuttal of possible objections takes place in the refutation. And lastly, the amplification ties up the conclusion with a summary and an explanation of the importance of this issue.

Mr. Henry began with an exordium complimenting the patriotism and abilities of his opponents and then wasted no time stating the issue in his narration: “This is no time for ceremony. The question before the House is one of awful moment to this country…I consider it as nothing less than a question of freedom or slavery….”

Next, he pointed out their differences in the division: “…it is natural to man to indulge in the illusions of hope…For my part, whatever anguish of spirit it may cost, I am willing to know the whole truth…and to provide for it.”

Then he listed his proofs for his confirmation. First, the British had not improved their behavior towards the colonies for the past ten years. Second, they were preparing for a war against the colonists. And last, the colonists had tried every available non-violent means to restore their freedoms and these methods had not worked. Therefore, they must fight before they were made slaves.

Mr. Henry did not forget his refutation. He brought up the concern that the colonists might be considered weak. He countered with several points. They would certainly not grow stronger by waiting around; they were three million strong; they had a holy cause—liberty; and they served a just God who rules and would raise up allies for them.

The amplification finished with a rousing call to action. He appealed to his audience to consider that in actuality, the war had already begun, for in fact fellow colonists in Boston were already committed to the fray. And he ended with that wonderful example of parallelism: “Give me liberty or give me death!”

It was so satisfying to tie the three strands of debate, American government, and composition together—to see in action the rigorous classical training that prepared this American patriot to produce a pivotal speech at such a crucial time in history. This was not an essay that Patrick Henry had worked over for a period of time. Instead, he had been trained to think this way, so that when he needed to make a point, he was able to fluently use the logic of debate and the arrangement of rhetoric to frame his appeal in a memorable and persuasive speech.