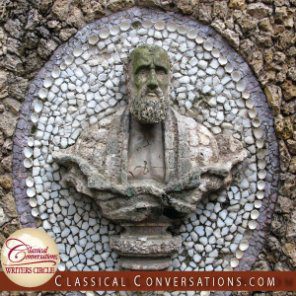 Over the course of the 2015-2016 academic year, both the Challenge II and Challenge III programs will be incorporating an original work of Plato into each curriculum. Challenge II students will be reading the Gorgias dialogue, and Challenge III will be reading the Meno dialogue. If you rejoice to hear this, then you may not need to read this article. But if this news baffles, bumfuzzles, or otherwise bewilders you, then please, read on. I am personally very excited about our students reading Plato firsthand, and I hope I can inspire you to embrace the upper Challenges’ new seminars and rejoice with me in this unique opportunity.

I am excited about reading Plato’s original translation together for several reasons; here are three of them: 1.) Old books are often more accessible than new ones. 2.) Plato is not only a world-class thinker, but also a world-class writer, and 3.) Plato’s dialogues don’t tell us how to educate; they show us.

To make my case for this first point, I offer a quote by C. S. Lewis:

There is a strange idea abroad that in every subject the ancient books should be read only by the professionals, and that the amateur should content himself with the modern books. Thus I have found as a tutor in English Literature that if the average student wants to find out something about Platonism, the very last thing he thinks of doing is to take a translation of Plato off the library shelf and read the Symposium. He would rather read some dreary modern book ten times as long, all about “isms” and influences and only once in twelve pages telling him what Plato actually said. The error is rather an amiable one, for it springs from humility. The student is half afraid to meet one of the great philosophers face to face. He feels himself inadequate and thinks he will not understand him. But if he only knew, the great man, just because of his greatness, is much more intelligible than his modern commentator. The simplest student will be able to understand, if not all, yet a very great deal of what Plato said; but hardly anyone can understand some modern books on Platonism. It has always therefore been one of my main endeavors as a teacher to persuade the young that firsthand knowledge is not only more worth acquiring than secondhand knowledge, but is usually much easier and more delightful to acquire.[i]

This is not to say that we should not read commentaries about Plato. In fact, in Challenge III we read a commentary about Western philosophy by R. C. Sproul. Dr. Sproul is a very concise and insightful writer. I am glad we are reading him, but whether or not anyone will be reading him in 2,500 years is still an unanswered question. Nobody knows. However, Plato did in fact live 2,500 years ago and people the world-over are still reading him. Why is that the case?

Why are folks still reading Plato? Because he is enjoyable to read. History is the judge of who becomes a classic writer and who gets left by the wayside after a generation or two. No one writes an “instant classic.” We often use that phrase of a high quality work that we expect to be enduring, but we really do not know that any book from recent days will be read 2,000 years from now.

Plato is still being read because he believed that common people could learn great things. This belief seeped into his writing as easily as the ink flowed from his stylus. As opposed to many philosophers and commentators since him, Plato wrote in order to be understood. According to twentieth century mathematician and philosopher, A. N. Whitehead, “The safest generalization of the European philosophical tradition is that it consists of a series of footnotes to Plato.”[ii] A brilliant thinker, who was only a mediocre writer, could not attain this status. Even though Plato invented “academia” he did not write for the ivory tower intellectuals; he loved his students, so he wrote with students in mind.

Most of his works are known as “dialogues.” These dialogues consist of two people asking one another questions in order to hone the meaning of words, ideas, and actions. Socrates is the main question-asker in the dialogues, so these question-and-answer sessions have become known as “Socratic Discussions.” We can read books on Socratic discussions and learn much; we can watch webinars on Socratic discussion and learn more; and by reading Plato’s dialogues we can actually experience the original Socratic discussions. In the Challenge levels of Classical Conversations, we endeavor to have discussions that imitate Socrates’ model. It is fitting that we read these dialogues firsthand in order to be able to emulate them better.

By taking C. S. Lewis’ advice and reading the Gorgias and the Meno aloud together, we will experience world-class thinking and writing, while learning how to both teach and learn from Socrates’ most famous student—Plato.