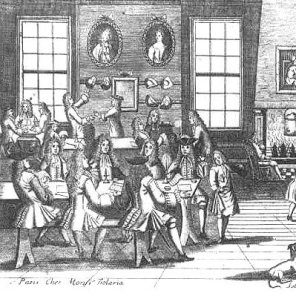 When I was in high school, one of my favorite attention-getting quotations came from the famous German composer Johann Sebastian Bach (1685–1750): “Without my morning coffee, I’m just like a dried-up piece of roast goat.”1 Reciting this line was guaranteed to generate, if not a laugh, at least a look of surprise and renewed interest from my audience. No one expected a sentence like that to come from the dignified, bewigged figure who had composed The Well-Tempered Clavier and the Goldberg Variations.

Interestingly, Bach’s interest in coffee makes perfect sense in light of its historical context. When Bach was composing music, coffee was a relative novelty in Europe. Venetian and Dutch traders began to import the rich beans from the Arabian Peninsula in the early 1600s, and coffeehouses quickly became essential locations for conducting business and exchanging ideas, much as they are today.2

Like the men of the Renaissance and Baroque eras, I rely on coffee as a source of inspiration and energy. Ask anyone who has attempted to hold a conversation with me before I drink my first cup of coffee in the morning. They might be tempted to compare me to the same piece of roast goat that Bach had in mind in the 1730s.

Freshly ground coffee is one of my favorite scents. Periodically, I resolve to buy whole-bean coffee and grind it fresh every morning. There is a soothing rhythm to starting your morning this way. Inevitably, however, I lose patience with this method. A situation arises at work, and I do not have time to make coffee the slow way. I begin to long for the simplicity of dumping a few preground tablespoons of coffee into the filter basket and pushing the “start” button. In short, I grow weary of the daily grind.

As the new school year approaches, you might be dreading a different kind of daily grind: the kind that involves math homework and spelling lists, bedtime routines, and peanut butter sandwiches. Perhaps you, like me, approach the daily grind with gritted teeth. This week, I began to reflect on this simple phrase and to reevaluate my attitude toward it as it applies to the daily routines that comprise our friendships, family lives, work, and schooling.

Like any good student, I began with the question of definitions. When you think about the daily grind, you might imagine the gears of a watch or another type of machinery grinding on and on, gradually wearing thin under the constant friction. Instead, I discovered, the phrase has its origins in agrarian society.

“The term ‘the daily grind’ actually comes from Anglo-Saxon England, after the fall of the Roman Empire (although it may have existed before then). It actually refers to the grinding and crushing of grains, specifically corn kernels or kernels of wheat. Grinding the grains up like this produced flour, which was used to make bread, which was the staple food of Roman, and later, Anglo-Saxon society. Without the ‘daily grind’, you had no flour. No flour meant no bread. … it all had to be done at home with your own grindstone and it was something you had to do every single day.”3

The daily grind also prevents us from storing up supplies out of fear for the future. One of the reasons that I avoid breaking tasks into small daily routines is that I am impatient to see results quickly: I want my coffee now. As a writing tutor, I want my student’s sentence to be correct now, even if I have to rewrite it for her.

I also want to avoid risk. What if my coffee grinder breaks and I am left to function without coffee? Likewise, what if my student fails an essay test? How will his failure reflect on me? As a result, I opt to predict and prevent potential problems, even if I have to sidestep the point of the lesson to do so .

Remember the account in Exodus 16 about the food God provided for the Israelites during their wanderings. Manna and quail appeared daily. The Israelites were to gather enough for only one day at a time, except in preparation for the Sabbath. When fear drove some of them to take more than their daily share, the extra food spoiled overnight to remind them that God’s provision was an exercise in faith.

What if we thought of our daily grind, whatever it may be, not as mindless, dull repetition, but rather as a chance to practice similar patience and trust? Imagine if we thought about education that way—as humble, consistent work based on our belief that such work will produce learning. Whether your daughter correctly answers twenty-seven out of thirty math problems or three out of thirty today, she will study math again tomorrow. Whether your son remembers two history facts or none today, he will study the timeline again tomorrow.

When we think about it that way, the rush fades. The anxiety lessens. Trust grows in slow, steady soil. So, tomorrow as you smell the rich aroma of brewing coffee or the woodsy scent of newly sharpened pencils, I encourage you to take time to celebrate the daily grind. It is not quick and it is not always thrilling, but the resulting savor is reward enough.

Access to coffee was a matter of cultural influence and involvement. In 1674, English women issued an anonymous “Women’s Petition Against Coffee” asking that the substance be banned, because, “Coffee leads men to trifle away their time, scald their chops, and spend their money, all for a little base, black, thick, nasty, bitter, stinking nauseous puddle water.” (Women were excluded from many coffeehouses.) To no one’s surprise, the petition had little effect. Coffee remained a staple of European culture.

SOURCE: “The Women’s Petition Against Coffee” [1674]. Available from http://www.gopetition.com/famous-petitions-in-history/232/the-women-s-petition-against-coffee-1674.html.

3 Cheong, Shahan. “The Origins of Some Common English Phrases.” Not Yet Published. December 22, 2009. http://www.throughouthistory.com/?p=480

4 Leigh Bortins uses a memorable story in her first book, Echo in Celebration, to apply this principle to education.

“My friend, Jayne, gave this illustration of true consistency. Jayne has two boys with severe learning issues and is fortunate to have enough love for her boys to fight with them and for them in finding the best teachers and methods of instruction.