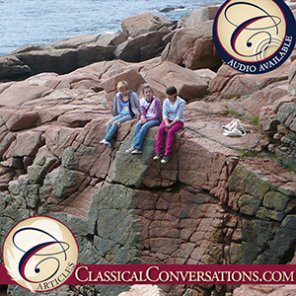 Recently I did something brave. I took my own advice. I have said that if you want your children to be vulnerable with you, you have to be vulnerable with them. So, when I sensed that my daughter who turned twelve this summer was beginning to hold back—feeling perhaps a little too silly or too uncomfortable to share her fluctuating emotions and rapidly changing opinions with me as readily as she has in years past—I took a risk and offered to read through my old journals with her. She eagerly jumped at the chance, and we have enjoyed several afternoons getting acquainted with my ten-, eleven-, and twelve-year-old self.

We have giggled over crushes that I (repeatedly) confessed to my journal and then years later went back and assiduously crossed out when embarrassment had succeeded ardor. We have sympathized with my struggles to be kind to that one particularly difficult brother—a responsibility I took seriously but clearly failed at regularly. But our progress through the journals is slow because as we read the trials and travails of my younger self with all of my quirks and misspellings, she has had much to share with me. She has felt that way too. She has wondered about that too. She didn’t know I had ever thought that!

Since I know the story already, I felt no guilt about peeking ahead a little bit. But something I read stopped me cold.

In my early teens, the male character who most caught my attention in literature was Rhett Butler. Now, whatever one may think of Gone with the Wind—and I enjoy both the novel and film to this day—he is not a character who respects and values women. He possesses a strong and in many ways compelling personality. I’ll admit he does make some admirable decisions (among many questionable ones). He can certainly come out with a memorable quip. He may be a man of charisma, but he is not a man of character and he is not a man I would like my daughter to seek out or admire.

So what did I see in him? And why does it matter?

I spent my childhood in a particular Christian subculture that, like the antebellum South, believed it was preserving a way of life that was beautiful and good. Yet, like the antebellum South, many of its priorities were drastically out of place—the kinds of priorities that would allow Mammy to support Scarlett’s bid to steal her sister’s fiancée in order to save the plantation, but resolutely demanded she refuse to help Scarlett obtain rouge. It prioritized appearances and penalized nonconformity. Please note, I am not making an argument about the Civil War and its causes or purposes, but rather observing that the specific cultures in which both Scarlett and I found ourselves valued appearances (and the opinions of the neighbors!) over truth.

What I admired about Rhett was his ability to so incisively diagnose the Pharisaism and dispassionately identify the dysfunction he observed. When he saw a naked emperor, he proclaimed the emperor naked. I admired his lack of pretense and his willingness to speak truth. And I gravitated to characters like him both in literature and in life. I was so starved for truth it didn’t bother me that with Rhett came neither goodness nor beauty.

Just as the attraction of Rhett Butler revealed what I most craved and valued, the characters she admires in the books we read together and the judgments she forms of their attitudes and actions help me learn about her heart. They reveal her longings and her needs, and they offer me an unparalleled opportunity to help shape her desires. I am grateful that thus far her insight has been far superior to mine at her age, and I look forward to walking alongside her as we both continue to learn about relationships through good books and great conversations.

Questions you might ask your children as you read with them:

Just a note: Remember that you aren’t interrogating your child but developing relationship, so avoid rapid-fire questions or standard “comprehension” questions. Let the conversation meander as it will, only asking another question if the pace of the conversation flags and the moment feels right. We have found that the best conversations take place when the tone feels cozy and comfortable, not formal and structured.