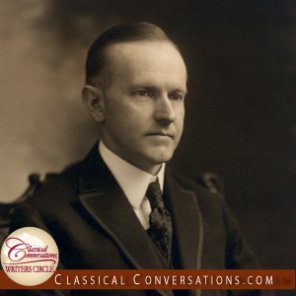 Calvin Coolidge’s father, a notary, administered the oath of office to our thirtieth president in their home when President Harding suddenly died. They had neither electricity nor telephone, so that night when the news arrived at the telegraph station, the operator had to drive up the mountain and wake up the Coolidges. By kerosene lamplight, Calvin Coolidge became president. I love that story. Coolidge’s inauspicious childhood on a Vermont farm, in a deeply Christian home, prepared him for greatness.

Smeared and dismissed by admirers of the progressives that followed him, Calvin Coolidge has been forgotten for nearly a century; but oh, this man has wisdom for those who still hold tenaciously to the founding principles of this nation! In addition to serving wisely in office, he spoke eloquently on education. Of his writings and speeches, four examples will suffice to show his views on a classical education: the necessity for poetic knowledge; for math, Latin, and Greek; for student persistence; and for faith.

Calvin Coolidge advocated classical education in an era influenced by the pragmatism of John Dewey. While Dewey stressed a scientific approach to learning, Coolidge found education incomplete without poetic knowledge. This is what students experience when they engage with what they are learning on a sensory-emotional level. They do not merely learn about a plant through anatomy lessons; they hold it, ponder it, plant it, and watch it grow. The Odyssey becomes more than a name on a list of Greek books; it becomes the journey every man makes as he battles his way home to wife and child. Youth need stories, heroes, and ideals. Coolidge says:

Education must not give only power but direction. It must minister to the whole man or it fails. Such an education considered from the position of society does not come from science. That provides power alone, but not direction….I do not underestimate schools of science and technical arts. They have a high and noble calling in ministering to mankind. They are important and necessary. I am pointing out that…they do not provide a civilization that can stand without the support of ideals that come from the classics.  (Commencement Address, Amherst College, June 18, 1919 (Hannaford 62).)

Coolidge also valued the study of math and classical languages. He grew up on a farm in Plymouth Notch, Vermont, an area that is still remote today. For high school he had to board at a school down in the valley. Later, at Amherst College he had a true liberal arts education. Years later he reflected back on his studies to say:

Courses of study must be pursued which require close application, accurate observation, precise comparison, and logical conclusion. I know of no courses which have supplied these requirements better than the study of mathematics, Latin, and Greek, when they are supplemented by contemplation of the great truths of philosophy and a generous knowledge of history. (Remarks as vice president to the County Teachers’ Institute and School Directors’ Convention, Reynoldsville, Pennsylvania, December 21, 1922. (63).)

Notice robust parallelism in the first sentence. Masterful use of rhetorical devices is evident throughout his speeches and writings. Again, we have affirmation that a good education engages in the great conversation that concerns all humankind, but it also requires the mind to be attentive to detail.

Poetic knowledge educates the whole man; math and the classic languages train the mind to close observation. However, these alone cannot make a fine graduate; they can do little for the half-hearted student.

Nothing in the world can take the place of Persistence. Talent will not; nothing is more common than unsuccessful men with talent. Genius will not; unrewarded genius is almost a proverb. Education will not; the world is full of educated derelicts. Persistence and determination alone are omnipotent. (Written in retirement in connection with his membership on the board of directors of the New York Life Insurance Company (118).)

What homeschooling parent has not experienced the tension between continuing to self-educate at the same time household responsibilities clamor shrilly for attention? If we are modeling diligence and requiring it, our children will embrace hard work (eventually!). Coolidge urges students to labor while their studies shape them:

The true ideal would seem to be a system that supplies those in the lower grades with certain basic information and those in the upper grades with the power to think….The school is not the end but only the beginning of an education. Yet its place cannot be filled in any other way. The best thing the millions of our youth can do to assure their future success is to work faithfully at their studies. That opportunity for improvement and discipline will never return. (Newspaper column, September 1, 1930 (63).)

Faith is the fourth and last example of the quality of education Calvin Coolidge valued, after poetic knowledge, math and languages, and student persistence. While in college, he was strongly influenced by his professor of philosophy, who “taught his students that ethical behavior and religious faith lay at the heart of a successful life.”1

Without the sustaining influence of faith in a divine power we could have little faith in ourselves. We need to feel that behind us is intelligence and love. Doubters do not achieve; skeptics do not contribute; cynics do not create. Faith is the great motive power, and no man reaches his full possibilities unless he has the deep conviction that life is eternally important, and that his work, well done, is part of an unending plan. (Presidential address delivered at the White House, July 25, 1924 (67).)

Will the Common Core State Standards teach the children of America to value human life? Will they teach the children that the universe is personal and intelligent, or that their work has meaning? School children have been soul-starved for a very long time.

In the midst of all the dark news I hear about our country’s direction, the pithy statements of this quiet former president encourage me. I want to share them with everyone who is bushwhacking through the rediscovered trail of Christian classical education!  Long may a Christian classical education shape men and women who will speak eloquently into an impoverished culture.

1 Hannaford, Peter, ed. The Quotable Calvin Coolidge; Sensible Words for a New Century. Bennington: Images from the Past, 2001. Print.