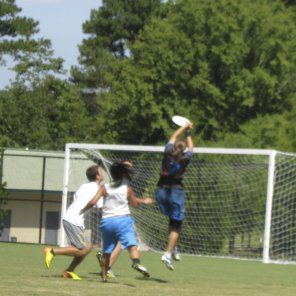 A lawyer, a medical student, a teenager, and a mom of three gather at a public park. No, this is not the beginning of a joke; it is the start of a weekend Ultimate Frisbee tournament.

In 1968, three high school students, one of whom would go on to produce the Matrix series and other popular Hollywood films, developed a rudimentary game of “frisbee football,” which they later renamed “Ultimate Frisbee.” Since that first casual summer, the sport has grown immensely, and as of 2012, the governing body, USA Ultimate (USAU), boasted 35,000 members.

I was introduced to Ultimate Frisbee in college, but I began playing recreationally about four years ago. Now, I play for a mixed club team in the Triad area of North Carolina. As I have discovered over the past four years, this sport is accessible, classical in nature, relational, and, above all, character building. I recommend it highly whether your high school student loves to run and is seeking a competitive outlet, or hates exercise and is seeking a tolerable alternative to the treadmill.

For the pragmatically minded, Ultimate is a remarkably accessible sport. Gear is inexpensive (a Frisbee, objects to mark the end zones, and cleats—optional—to enhance running and turning ability). Informal pickup groups exist across the nation. These casual games require only a stretch of open field, often available for free at local parks or in a friend’s backyard. Competitive play includes Youth, College, Club, and Masters divisions to suit players of any age. The sport is homeschool friendly as well; in 2005, USAU added a youth club championship for teenagers who do not have a high school team. Teams are available for boys, girls, and mixed play.

In describing the sport of Ultimate, I have tried to use language that will be familiar to my readers, but, like any sport, Ultimate has its own set of vocabulary. When I began to play, I was humbled by my need to start at the grammar level. Words like “disc,” “pick,” “huck,” “flick,” “hammer,” “force,” “pull,” “cut,” and “stack,” as well as the rules of the game, were new memory pegs for me as an adult. Then, I had to learn new skills: how to throw, how to catch, where to move on the field, how to run a play, and how to form a defense. Like any other dialectic student, I practiced this by asking a lot of questions and drilling the basics in different combinations. Finally, it was game time, and I had to become a rhetorician in the sport, working as part of a team to apply my knowledge and skills in pursuit of a specific goal.

Teamwork is one of the most attractive features of any sport, and Ultimate is no exception. As the sport has grown, it has become an immediate point of connection among strangers and friends alike. It is not uncommon, when I introduce myself to a new player in my local group, to find that he or she has recently moved to the city and immediately sought out the Ultimate community as a reliable source of friends. Furthermore, particularly among casual players, intergenerational friendships are common. Younger players learn patience from older players, and older players benefit from the lighthearted playing style and sheer exuberance of younger athletes.

The mentoring aspect of Ultimate Frisbee is essential because it passes on a legacy that is one of the sport’s most distinctive features: “Spirit of the Game.” This description comes from the USAU home page:

“Ultimate has traditionally relied upon a spirit of sportsmanship which places the responsibility for fair play on the players themselves. Highly competitive play is encouraged, but never at the expense of the bond of mutual respect between players, adherence to the agreed-upon rules of the game, or the basic joy of play…. For over 30 years, Ultimate has flourished, reaching a highly competitive level, without the use of referees. In Ultimate, the honor system works. Sure, human nature rears its ugly head from time to time – just as in any sport, just as in life. Yet, one of the many beauties of Ultimate is how, even amid the most difficult of situations, utmost graciousness is allowed to meet that challenge head on. Through this balance, Ultimate players are free to demonstrate the most honorable and the most joyous sides of human nature in sport.”

By settling their own disputes and demonstrating good will in victory and defeat, players practice self-governance, sportsmanship, and integrity. They learn not only to exert effort and master a set of skills, but also, and perhaps more importantly, how to master themselves. After all, physical endurance provides many benefits to mind and body, but it fades over time. The discipline required to treat self and others with honor and respect, no matter the circumstances, endures for a lifetime.