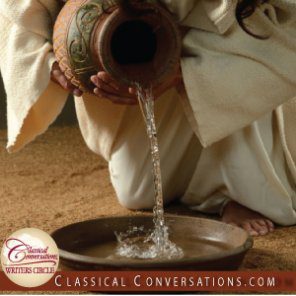 I sometimes cringe when I hear Jesus called a great teacher. All too often, those words are used to label Jesus as “merely” a great teacher, and He is so much more. Nevertheless, He was a great teacher. Like Jesus, the best teachers lead by example. Think about the best teachers you have had. You might remember the subjects they taught, but you probably remember more clearly the way they taught, their mastery, their skill, and most importantly, their character. Maybe some were a bit disorganized, some a bit quirky, but they loved seeking the truth, were passionate in helping you to grow in knowledge, and they had humility. They were people whom you wanted to imitate. I am convinced that to become a great teacher one must believe and embody the twin ideas that teaching with love is greater than teaching with mastery, but teaching with true mastery is, inherently, to teach with love. Let’s look at how Jesus taught.

Consider the following scene. Jesus and the disciples are in the upper room for the Passover. Jesus knows He is going to His crucifixion and that His disciples are clueless, but He loves them dearly. In the Gospel of John 13:3-17 (NIV1984) we read:

Jesus knew that the Father had put all things under his power, and that he had come from God and was returning to God; so he got up from the meal, took off his outer clothing, and wrapped a towel around his waist. After that, he poured water into a basin and began to wash his disciples’ feet, drying them with the towel that was wrapped around him.

He came to Simon Peter, who said to him, “Lord, are you going to wash my feet?”

Jesus replied, “You do not realize now what I am doing, but later you will understand.”

Jesus answered, “Unless I wash you, you have no part with me.”

“Then, Lord,” Simon Peter replied, “not just my feet but my hands and my head as well!”

Jesus answered, “A person who has had a bath needs only to wash his feet; his whole body is clean. And you are clean, though not every one of you.” For he knew who was going to betray him, and that was why he said not every one was clean.

When he had finished washing their feet, he put on his clothes and returned to his place. “Do you understand what I have done for you?” he asked them. “You call me ‘Teacher’ and ‘Lord,’ and rightly so, for that is what I am. Now that I, your Lord and Teacher, have washed your feet, you also should wash one another’s feet. I have set you an example that you should do as I have done for you. I tell you the truth, no servant is greater than his master, nor is a messenger greater than the one who sent him. Now that you know these things, you will be blessed if you do them.

Think how powerful that image of Jesus washing their feet must have been in their minds, especially when, later, they began to link it with the crucifixion. When the Holy Spirit opened their eyes and helped them to remember all that Jesus said and did, this scene must have stuck out. Whenever they thought of their Lord, they would remember that He was the one who washed their feet, who then told them to do the same for each other. They would consequently understand that this upending of the normal order of things is at the core of the kingdom of God. Jesus says, “Now that you know these things, you will be blessed if you do them.” That is a powerful lesson.

How then did Jesus teach them? He showed them, rather than simply telling them. In other words, He taught them mimetically. There are five basic parts to a great mimetic lesson and Jesus used all five.

1. Jesus connected His lesson to prior knowledge. That is, when He took off His outer garments and began washing their feet, He relied on their cultural understanding of servants and masters. They saw what He was doing even if they thought it strikingly odd. And they felt the tension, so they needed a resolution.

2. He gave them an example or type. He created an image of a master serving His servants. Imagine the scene: they had to sit there and watch Him wash their feet. They each individually had to physically experience their feet being washed by their teacher. This must have been a profoundly visceral example.

3. Christ compared this type to other types. He called attention to how this new type contrasted with what they knew to be the normal order of things. They could feel the tension, but He made sure they got it by connecting His example to what they thought they knew was right. The comparison must have been startling. By calling it out, Jesus made sure they understood that seeing the distinction was critical.

4. Jesus expressed the idea. He told them the point of the lesson directly and simply. He gave them words they could not forget: “Now that I, your Lord and Teacher, have washed your feet, you also should wash one another’s feet.”

5. He applied the idea. He told them to do as He had done, to be servants to one another. Later He would give them the greatest image of application they could ever hope or fear: His death on the cross.

Imagine Peter, years later, facing his own crucifixion for the sake of the gospel. Imagine him looking back on his experiences as an apostle, all that he had experienced up to that point, all that he had preached, and all that he had suffered. Peter remembers that evening, sitting in a warm upper room as his beloved Lord stripped himself of His outer garments and washed the disciples’ feet; how his master and teacher got down on His hands and knees and became their lowly servant. Peter must have recalled how Jesus looked, the color of His eyes, His voice, His expression, and His simple and elegant message. Peter must also have remembered his own confusion, his emotional response, and his wonder at what it might mean. Facing death, just as in life, Peter would have confronted the question, “What type of man will I be?” Fortunately, in his mind and soul, Peter would always have the indelible image of Jesus the master as servant; an image given as a gift―a gift Peter was able to receive, in part, because Jesus had:

• connected that critical lesson to prior knowledge;
• given Peter an example or type to imitate;
• compared that type to other types;
• expressed the idea clearly to Peter when Peter was ready;
• told Peter to apply the idea in his life.

Jesus was a great teacher. He taught with love and He taught with mastery. Ultimately, He demonstrated both His love and His mastery by laying down His life for the sake of the world. Would that we might all become that kind of teacher. I am convinced some of us already embody a great deal of that type. My wife does, more than I. Regardless of the degree to which we embody it, however, all of us can do no better than to imitate Christ.