The Book of Books 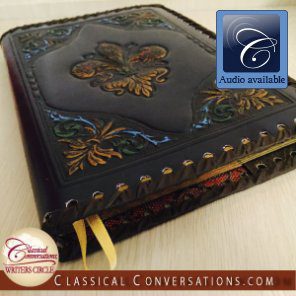 When my daughter Gaeligh was two and a half, she received the complete set of Beatrix Potter books as a Christmas gift, and that January her favorite book became “The Tale of Samuel Whiskers”—a story we read, discussed, quoted, and reenacted many times over the upcoming months. She had always loved being read to, and she was excited at this, her first foray into books that were almost long enough to be “chapter books.”

As we relished the full experience of the book together, I considered the deep impression the characters she had met in board books and short children’s stories had already made on her, and I couldn’t wait to introduce her to some of my childhood favorites. I imagined the pleasure she would enjoy when she met Stuart Little, the Pevensies, Laura Ingalls, Elnora Comstock, the Five Little Peppers, Anne of Green Gables, Rikki-Tikki-Tavi, Christian and Faithful, the March sisters, and so many others. I wondered how she would react to them, how they would change her, inspire her, and enlarge her horizons and her soul. I suddenly wanted some way to record these precious developments, some way to be able to retrace and recount them together as she grew. And that is how we began The Book of Books.

We decided to keep a book in which we would document all of the chapter books that she read or listened to over the years. I pressed into service a beautiful black leather notebook that I had been given years prior and had never been quite sure how to best use. “The Tale of Samuel Whiskers” was the first entry—the first of many. For us, the crowning joy of completing a book is adding to the record of our many delightful hours of learning, growing, laughing, crying, contemplating, and discussing together by solemnly entering the title, author, and date into The Book of Books.

Often, after we complete the latest entry, we flip back through the pages recalling memories stirred by old titles. She often points out Pippi Longstocking and reminds me that one of the happiest memories of her life occurred while we read a few chapters together on a warm September day. We had been running errands that day, and our final stop was at the mechanic’s to get the oil changed. We were thrilled to discover that an ice cream shop had opened up beside our mechanic’s location, so we savored ice cream cones and sunshine on the patio while we read together. If it had not been for The Book of Books, I’m not sure I ever would have known how special the moment was to her. She had not mentioned it to me until we looked through the list of books together years later and it jogged her memory. Now it’s a treasured recollection we share each time we leaf back through the pages.

When we come to The Story of the World Volume One, we fondly recall creating cuneiform tablets out of clay, building ziggurats, creating the Code of Gaeligh (her own version of the Code of Hammurabi), and the time we realized we needed a clarification of terms. She had built a ziggurat and had carefully placed a toy ship nearby which she explained was Sargon’s Military Dictator Ship.

We exclaim over the serendipity of stumbling upon E. Nesbit, now one of our favorite authors, through her wonderful short story “Melisande” at our library, and think of the delightful adventures we would have missed without her—The Five Children and It, The Railroad Children, The Enchanted Castle, The Wouldbegoods. We were pleased to learn later that E. Nesbit was one of C. S. Lewis’ favorite childhood authors as well.

We recall the week that we were too sick to get out of bed, so we read the entire Chronicles of Narnia from start to finish. We remember the time that we moved from Pennsylvania to Virginia but our belongings didn’t arrive in the new home for a month and all we had were suitcases of clothes, a few dishes and blankets, and a box of books I had brought thinking it might come in handy. What a wonderful month we enjoyed reading together in our new house!

We remark on the entry for The Sign of the Beaver which was the first book on tape she ever encountered. Our library in Pennsylvania had not offered them. After this incredible discovery, my husband and I always knew the moment she woke up in the morning. We would hear the rustle of the covers being pushed aside and the sound of deliberate footsteps, and then the current recorded book would begin its pleasant drone from across the hall. To this day, she still checks out the maximum number of recorded books from the library with every visit. It did not surprise me when, in answer to her self-posed question, “Would you rather be deaf or blind?” she emphatically chose blind because if she became deaf, she would never again be able to listen to someone read to her.

We exchange sympathetic smiles when we discuss Anne of Green Gables. She loved the book, as I had expected she would. However, I had never anticipated that, during a discussion when we were about half-way through the book, she would confide that Matthew was her favorite character. I had always assumed that she would identify most closely with Anne. But no, instead she identified with the person who most loved Anne. What an important insight into her character I gained that day. My heart was heavy as we drew ever closer to the end of the novel, knowing that death awaited Matthew in the final chapters. I felt the weight of foreknowledge and wondered if I might have tasted of God’s heart towards us when an unexpected sorrow lies around the bend. We both cried as we read the scene. She wept for Anne and Marilla and in mourning over the loss of Matthew, and I wept for her.

Because my husband traveled frequently for work, we were rarely able to read as a family. Instead, reading together was how Gaeligh and I spent every spare moment when he was not at home. Even going to the park meant playing, yes, but always bringing our book to read outside (with tasty snacks!) as well. A few favored books became books that we shared with my husband as we had opportunity though, and they have each enriched our family culture in their own way. Cheaper by the Dozen was the first book that we shared all together and our family vocabulary still includes “foolish carriage” as a rich and varied term of endearment. We have enjoyed Sir Arthur Conan Doyle’s A Study in Scarlet, Mark Twain’s Roughing It, George MacDonald’s The Golden Key, and Antoine de Saint-Euxpery’s The Little Prince together. These last two remain family favorites and are featured in all lists of books that we would take with us if trapped on a desert island.

Last year, as one of her Foundations presentations, Gaeligh shared with her class our tradition of The Book of Books and encouraged her classmates to begin one of their own. To supplement her presentation, she made a bar chart illustrating the number of books entered into The Book of Books each year since we began it, and commented on the trends she observed. She noted which years we had been careful to preserve leisure time (thus many books) and which years were more hectic and scheduled (thus fewer books), and pointed out the marked increase that occurred when she discovered recorded books and then again when she learned to enjoy reading independently.

The Book of Books is a treasured record. It offers a tiny glimpse into the development of Gaeligh’s unique character. It is a cherished tribute to our relationship and the time we have invested in each other. It has become a family heirloom and a tradition she plans to continue with her children.

I invite you to join us. Will you consider creating a Book of Books for your child or your family? You will be so glad of the memories it preserves, of the much-needed reminder to be deliberate about reading good books together, and of the opportunity it offers to celebrate both your childen’s growth and your deepening relationship with them.