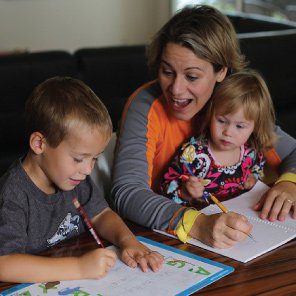 “We believe parents are their children’s primary teachers not because parents know everything but because each child is uniquely (and wonderfully!) made and because the people who know and love a child best are the ones most motivated to help that child succeed.”

We believed in parents educating their children long before Classical Conversations was founded. We will continue to stand up for the rights of parents to choose to homeschool without government interference as long as the Lord gives us breath.  The Common Core State Standards Initiative does not seek to protect a family’s right to educate a child as they see fit. Instead, the Common Core State Standards seek to standardize education for all children in all places.

Many articles and television interviews have increased parents’ fears about these standards. Instead of being fearful, I would encourage parents to become better informed. The best site for information is  Home School Legal Defense Association as they have studied the law and have interviewed the creator of the Common Core State Standards.

It is important for all of us to be informed about the Common Core State Standards Initiative and to fight against this and similar legislation. This kind of standard leads us away from freedom and liberty—not towards it.

It is not necessary for each of us to become experts at all of the individual academic standards in the Common Core State Standards. In fact, on the surface, the standards themselves are good. This has confused many people. After all, who would not want our students to read, write, think, do math and be ready for twenty-first century jobs?

The real issue is not necessarily the standards themselves, but the attempt to gain centralized control over education. We have been down this road before with efforts like No Child Left Behind. Historically, these efforts have failed and have wasted precious resources. One can predict the same for the Common Core State Standards Initiative.

What tends to happen is that the government can only be reactive, not proactive. In addition, the government schools, as a large bureaucracy, can only react slowly. As an example, the government did not predict the development of the Internet. If they had, they would have changed their education standards in the 1980s and had everyone prepared for the IT field ten years ago. The government will not predict the next great job creator either. By the time government arrives at the needs, they are no longer the current needs. As the government has centralized education and taken control from families we have seen significant growth in our country’s debt, a significant reduction in the educational achievements of our nation and a loss of liberty in many aspects of our lives. When the government passes any bill you need to ask only one question: Does this law protect liberty or not? If not then we must oppose it with all our might. We have remained silent for too long.

As parents who are seeking to give your children a classical, Christian education, you will give them what they need. You have already demonstrated a deep commitment to individual liberties. In addition, you will give them the skills which can prepare them for a rapidly changing job market. You will have given them the tools of learning that will enable them to tackle any new challenges that come their way.

Therefore, while I would encourage you to become more informed about the Common Core State Standards Initiative, I would also encourage you to continue homeschooling your children with confidence, knowing that you have not chosen a passing educational fad, but a model that has stood the test of time. You are unlocking the tools of learning so that your students can tackle any new subject.