The Hobbit Retreat: What Is It? 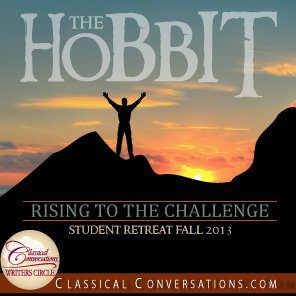 What is The Hobbit Retreat? Some of my readers will know, some will not. In October, Classical Conversations held the first of what we hope will be many “Rising to the Challenge” student retreats. The theme of this first retreat was J.R.R. Tolkien’s The Hobbit. It was well-timed, I think, because the retreat invitation was extended to Challenge I-IV students, most of whom have read or will soon read the book. It is also timely due to the recent release of the new movie, The Hobbit.

The retreat asked students (and the five parents or tutors who attended) to participate in two academic seminars in the mornings and two evening Socratic dialogs about The Hobbit. In the afternoons, the students were engaged in activities such as ropes courses, zip lines, dodgeball, and Ultimate Frisbee competitions.

We have had some amazing feedback from students, parents, and tutors on the event. These Challenge students realized how many other like-minded students there are, who care about and enjoy reading and discussing good literature, good thinking, and good communication. Many of them left the retreat with a rekindled love for learning and a curiosity for discovering truth and ideas through conversation.

The first full night, we discussed why Bilbo went on the adventure. The group was evenly split between those who thought Bilbo was pursuing gold and glory and those who thought Bilbo was trying to satisfy a desire for adventure. The second night, we discussed whether Gandalf should have left the fellowship of dwarves and hobbit at the edge of Mirkwood Forest. Through these two discussions, we taught the students how to engage in conversation in a way that loves their neighbor, is a quest for truth rather than a debate to win, and acknowledges how much we have in common rather than accentuating how much we disagree.

After the second discussion, I asked the students (and parents and tutors) to compare the two discussions and identify what they learned. Every one of them agreed that the second discussion was far more neighborly, respectful, and profitable than the first. Some of them wished more could have been accomplished—at least insofar as individuals getting to participate more, but that is a drawback that can only be satisfied by smaller groups. Acknowledging that this was a large group (thirty people), the second conversation was a success in that it was more neighborly, respectful, and profitable.

The students learned skills—and saw the need to use them—which enabled them to love their neighbors, respect their opinions, and yet engage one another in the mutual pursuit of truth. They learned that we are not the weirdos and everyone else is normal, but we are normal to love the things we love (good literature, good ideas, good conversation) and there are far more teenagers who love these things than they may have originally thought.

We are hoping to be able to offer more of these retreats next spring and next fall, so stay tuned for the announcements. All in all, I think the retreat was a success by having so many Challenge students come together from so many places and share in this adventure. In many ways, I think these students might have a newly found appreciation for Classical Conversations and the education their parents are striving so hard to give them.