The Home School as Monastery 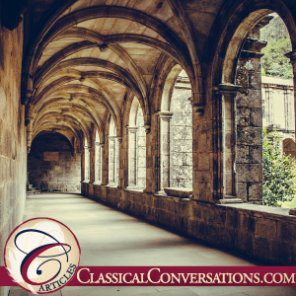 Saint Benedict (480-547) lived in an era of decline in the Roman Empire. He realized that it was growing difficult to practice true Christianity given the cultural temperature of his day. Instead of falling prey to the weaknesses his society suffered from, Benedict “retreated” to establish a series of monasteries where the orthodox faith could be practiced ascetically and the traditions of the Church could be preserved. All in all, he founded twelve of these communities centered around “The Rule of St. Benedict,” a rigorous guide to a disciplined spirituality.

Benedict lived right at the beginning of the “Dark Ages,” which began with the Fall of Rome in the fifth century and lasted until the fourteenth century with the arrival of the Renaissance. There are numerous parallels between Rome during its period of decline and our current culture today. Externally, Rome faced perpetual war with barbarians and financial instability. Internally, there was strife and a breakdown of social order.

The response of the American church to similar circumstances faced in today’s culture has not been encouraging. Instead of transmitting the faith as it was once delivered, there has been a pivot to relevance only to achieve impotence.

The statistics are not encouraging. One in three 18-29 year olds are not religious at all. Many young adults raised in the church go off to college and leave the faith. Furthermore, in one Pew study, out of people who attend a local church, 36 percent of respondents attend once or more a week while 33 percent only attend once or twice a month or just a few times per year, which means the amount of time they are in uniquely Christian environments is substantially less than their counterparts. To make matters worse, another study by LifeWay Research and Ligonier Ministries found that as many as two-thirds of self-identified Christians believe things like “God accepts the worship of Christians, Jews, and Muslims” and a number of other heresies.

In many churches, the emphasis seems to be on entertainment  or political action. Meanwhile, many denominations are compromising the very fundamentals of the Gospel to receive applause from the larger culture while ironically hemorrhaging members. The absence of an effective church has created a space more prone to pluralism (a value which is not bad in and of itself when understood civically). The problem is that the pluralism we are currently experiencing in our own culture is partnered with a rampant secularization.

In the face of such social decline, what are Christians to do?

St. Benedict’s solution is to establish monasteries, practice disciplines (he uses the phrase ora et labora, “work and prayer”), and preserve the traditions. Monastic communities can, in such dire times, function like the ark which preserved Noah and his family during the flood. Dreher posits that, while not everyone today will be able to live in a monastery, they can live monastically. To live monastically is to create “parallel structures” in the church distinct from the larger culture.

One good example might be marriage. The state views marriage as little more than a business contract between two people. Whatever the church has traditionally taught about marriage, it’s not that. To Christians, marriage is a sacramental reality, a sacred covenant before God. “What therefore God has joined together, let no man put asunder” (Matt 19:6; RSV). A monastic response might be to follow the example of a growing number of pastors who refuse to participate in state weddings. Instead, they carve out a place for Christians to practice fully what marriage is within the church. They refuse to sign legal contracts because they recognize that God is the one who defines marriage, not the state.

One area Dreher claims we desperately need parallel structures is education. He understands the reality: modern education has become the vanguard of a progressive ideology incompatible with Christianity. The very way the modern school day is constructed reeks of fragmentation. Students wander from classroom to classroom where they learn from different teachers for different subjects with no real opportunities for integration of subjects nor integration of those subjects with God. The secularism undergirding the public school system disenchants learning for our children in the same way nominalism devastated the Medieval sacramental vision of the world. It strips away their faith from their study, forcing them to embrace a compartmentalization that boxes in their religious convictions.

According to Benedict and Dreher, we should pull our children out of public schools. This may raise some objections. Many Christian families decide to put their children in state schools as a way of being missional. Ten or fifteen years ago, this argument was not airtight but it was more tenable than it is now. The problem is that middle and high school students are not fully formed human beings. Neuroscience tells us that their brains are not fully developed yet. They have not completed their catechism. This well-intentioned but misguided view places an expectation on our children that is only realistic if we ignore their biological makeup and act as if their brains are more developed than they are.

If we are wise, we will listen to what Benedict and Dreher have said and apply it to the education of our children. Perhaps it is best we begin to structure our homeschools as monasteries. If you’re already homeschooling, you’re technically stepping in the right direction whether you know it or not! Nevertheless, being intentional is preferable. There are many ways you can cultivate a monastic environment in your home.

The first step is to live a disciplined life. Center your home around ora et labora. Bathe your day in prayer. Craft a liturgy for your homeschool. Your children’s labor is work. In the context of education, that means teaching them to take their work seriously, to be diligent and eager.

Then, make sure you are passing the faith on within your monastery. The home school is a place to teach your children to filter everything through a biblical lens and think “Christianly” about the world around them. Classical Christian education does this naturally because it places God directly at the center. God isn’t just “sprinkled on top.” Everything flows from God and points back to him.

Ultimately, it must be remembered, we don’t homeschool our children because we are merely afraid of the outside world. Ultimately, we homeschool our children because we care about the good of the world. We want to be a missional people. Yet we understand that a sick, undeveloped church cannot effectively engage the larger culture. As we have seen, the result is either severe ineffectiveness or succumbing to hostile forces. Raising and catechizing our children in the orthodox faith is one the most missional tasks we can pray to accomplish. While home schools offer parental freedom and provide a certain degree of independence, a community like Classical Conversations is wonderfully helpful because it provides a place where we can join with others to strengthen our monastic community, not only for the sake of our family but for the sake of the world.