The Incarnation–The Right Time and the Right Place 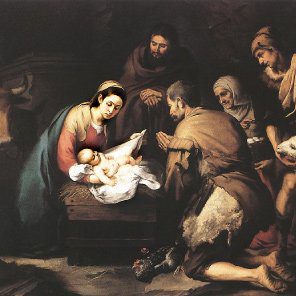 At the time of Jesus’ coming, the world was roughly divided into two kinds of people—God’s chosen people,the Jews, and everyone else, the Gentiles. For hundreds of years, the Jews had been seeking the promised Messiah, but they looked in the wrong kinds of places for the wrong kind of person.

They sought an earthly king who would deliver them from earthly miseries. They failed to see the gaping flaws in the system of sacrifices that comprised their religion. Soon, the writer of Hebrews would tell them:

For the law having a shadow of good things to come, and not the very image of the things, can never with those sacrifices which they offered year by year continually make the comers thereunto perfect. For then would they not have ceased to be offered? because that the worshippers once purged should have had no more conscience of sins (Hebrews 10:1-2, KJV).

Ask any Challenge II or III students and they will tell you that the second verse is begging to be made into a logical syllogism.

If the sacrifices made the sinners perfect, they would cease to offer them.

The sinners did not cease to offer them.

Therefore, the sacrifices did not make them perfect.

The Jews sought the Messiah and yet they did not look for the perfect sacrifice.

All of these things I learned in Sunday School, but it was not until I began to pursue classical, Christian education that I saw how the Gentiles sought Him, too. With my Challenge III class the last few years, I read how Greek philosophers sought the one unifying principle that would explain the universe.

Is it possible that the Gentiles were seeking Him, too?

Aristotle came so close when he reasoned that the first cause must have an uncaused cause. He called it the Unmoved Mover or the First Mover. Like so many others, he sought the one explanation that would bind together all of the particulars of this life and make sense of them. He took some of his ideas on the First Mover from his teacher, Plato.

In the Socratic dialogue on love, the Phaedrus, Plato writes:

So far, this is a good description of Almighty God. He did not come into being from anything else, but was self-existent throughout eternity. He does not perish.

As enchanted as he was with the idea of first causes, however, Plato abhorred the physical world. In fact, he describes the blessed state of the immortal soul as this “our final initiation towards whole, simple, unchanging, and blissful revelations, in a pure light, pure ourselves, and not entombed in this thing which we now carry around with us and call body, imprisoned like oysters” (31).

The Greeks sought the perfect, uncaused cause, and yet they did not look for one that would take on flesh.

So, it was into this world that Christ came. On the one hand, the Jews had hundreds of years of prophecies. On the other hand, the Greeks had the words of great thinkers. The ideas of the Jews had spread through the written words of their Scripture and through their pilgrimages to the Temple for sacrifice. The ideas of the Greeks had spread through the conquests of Alexander the Great to influence most of the known world. This period in history, known as Hellenism, lasted until the Romans won the great naval battle at Actium in 31 BC.

The time was ripe for the coming of the Messiah.

The very fact that He entered the world in a particular time and place, and revealed himself to particular people, troubles the modern world. Annie Dillard reflects on the mystery of Christ’s coming into time: “That Christ’s incarnation occurred improbably, ridiculously, at such-and-such a time, into such-and-such a place, is referred to—with great sincerity even among believers—as the ‘scandal of particularity.’ Well, the ‘scandal of particularity’ is the only world that I, in particular, know” (81).

He came to fulfill all of their longings. For the Jews, He perfected the sacrifices and reconciled them to God. But, He did it in a way that may have seemed scandalous and almost unthinkable—by taking on flesh to offer it up in death. For the Greeks, He was the logos, the original idea, the unmoved mover who caused and unified all that they could see. And yet, He accomplished His mission by agreeing to imprisonment in “this thing we carry around with us and call body.” Surely these are great and wondrous mysteries.

For those who had eyes to see, He was the answer to all of the riddles—the completion of their minds and souls. Though He has existed for all eternity, He took on flesh and died. Though He stands outside of time, He came into a stable in Bethlehem at one particular moment in history.

May we all marvel at the mystery of the Incarnation this Christmas season.