The Passionate Voice (How and Why We Teach Passive Voice) 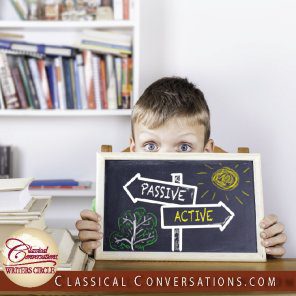 The example we use in class is, “Jesus wept.” This is active voice. We change it to passive voice by doing something like this: “Tears of sorrow were wept by Jesus.” Don’t you like the second version? I am moved by the second version and it is passive voice. Can that be bad? No, it is full of expression and passion and it is beautiful. It is almost poetic. Also notice that changing the sentence’s voice changes the readers’ focus. In the active voice of this example, our attention is on Jesus and what He is doing at that moment. In the passive voice example, our attention is focused on the tears of sorrow, making one imagine what depth of sorrow would make Him weep.

Here are a few more examples of passive voice:

“…all men are created equal, that they are they are endowed by their Creator with certain unalienable Rights, that among these are Life, Liberty and the pursuit of Happiness.” (Thomas Jefferson, United States Declaration of Independence, 1776.)

“Before Hester Prynne could call together her thoughts, and consider what was practicable to be done in this new and startling aspect of affairs, the sound of military music was heard approaching along a contiguous street. (Nathaniel Hawthorne, The Scarlet letter, 1850.)

“Viri fortes confirmatbuntur.” Translated into English: “The bravery of the men will be encouraged.” (Henle, First Year Latin, 1958.)

The one type of writing in which I do prefer active voice is the instruction manual for the DVD player or the toaster oven. If I need clear information fast, I want active voice. So, lab reports will not be the place where I let my students experiment with passive voice.  If, however, your student would like to read historic documents and classics, or to write about substantial ideas and themes themselves, they should learn to read and use passive voice well.

Passive voice is a poetic, passionate voice. Allow your students to play with it and you may find they are capable of expressing more than you expected in a poetic and passionate way. Just remind them that powerful things should be handled with caution. I hope many of our students will have important things to say and that they will be able to say them powerfully and passionately.