The Power of Parent Practicum 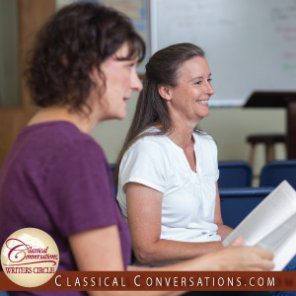 I love Parent Practicum. I attended my first one seven years ago. As a relatively new homeschool mom, I had been enrolled in Classical Conversations for one year after having done a year on my own. I really wasn’t sure why I was attending this three-day event, but as I dutifully sat listening to Leigh Bortins, she flashed these words on the screen:

When in the course of human events, it becomes necessary for one people to dissolve the political bands which have connected them with another, and to assume among the powers of the earth, the separate and equal station to which the Laws of Nature and of Nature’s God entitle them, a decent respect to the opinions of mankind requires that they should declare the causes which impel them to the separation.

And I didn’t recognize it.

Feeling slighting embarrassed after she revealed it was the preamble of the Declaration of Independence, I was even further challenged as we listened to Andrew Kern deftly navigate from William Butler Yeats’ “The Second Coming” to J.R.R. Tolkein’s The Hobbit in his 2009 Circe Institute lecture “The Contemplation of Nature,” and my heart jumped at the possibility of “more.”

The vision cast and the ideas sown by Leigh Bortins and Andrew Kern that year still excite and motivate me today, and I haven’t missed a single Practicum since. I’ve even attended more than one in a summer, and I can honestly say that each one has taught me something new and something different while reinforcing that which I know to be true. In some form or fashion, they have all played a part in making me a more educated, more peaceful, and more confident homeschool parent.

Practicum is integral to my homeschool journey. I’ve been equipped there. I’ve relished the warmth of community. I’ve recharged after a long school year. It’s the conversations I have at the coffee table with fellow parents that encourage me, as well as the ones it produces later in the summer at the pool with my friends as we contemplate the next school year—conversations that nurture my heart and soul.

Practicum is being surrounded by people who are willing to engage in meaningful discussion about their hopes, goals, and dreams for their children’s future as they openly share the triumphs and the trials they have faced on their journey. It’s a touchstone with the larger community of parents and grandparents who have bravely chosen to walk a different educational path than the mainstream.

As of the last U.S. Census, less than 5 percent of the population homeschools. What could be a lonely road doesn’t have to be. Actually, it shouldn’t be. We were made to live in community. We are stronger in community.

Practicum is the gathering of like-minded people, the opportunity to be encouraged or to encourage someone who may be just starting or thinking about starting. Practicum is the opportunity to learn and grow together in community. The best part is that they are free for parents! All day camps and nursery are less than $15 a day, complete with fun, educational activities for children.

It’s been seven years since my first Practicum, and I am still digesting and pondering the deep thoughts presented to me then and since then. I am still excited about this homeschool journey and what lies around the corner as my oldest is almost half-way through the Challenge program. I am still reaping the benefits of the three days I invested all those years ago.

Who knows what this year’s Practicum will bring to my journey? One thing’s for sure; I wouldn’t miss it for the world. Won’t you join me and the thousands of homeschooling parents across the nation this summer at Practicum? It’s going to be a great one!