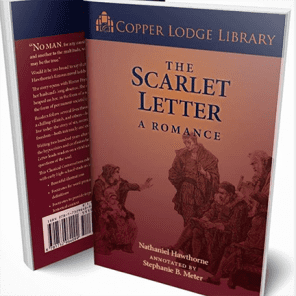 Classical Conversations has just released the eighth volume in its Copper Lodge Library series of classic literature, “The Scarlet Letter: A Romance” by Nathanial Hawthorne.

This new edition of “The Scarlet Letter” presents Hawthorne’s classic story of judgment, sin and forgiveness in a version that is specifically tailored for Challenge I students. The book is a significant quality upgrade from the Dover edition and features illustrations and 421 footnotes and annotations providing valuable content and context for readers.

“The Scarlet Letter,” which is part of the curriculum in Challenge I, is available for $14.95 from the Classical Conversations Library.

Stephanie Meter, herself a graduate of Classical Conversations, annotated this edition. Meter has worked as an assistant editor at CCMM, CC’s publishing company, for several years and now has joined CCMM’s Content Creation Team full-time.

“The purpose of annotations is to help students more fully understand, appreciate and enjoy a work of literature,” Meter said. “I know I did not look up nearly as many words as I should have when I was reading for Challenge; having the footnotes right on the page keeps the students engaged and informed without their having to put the book down and do research.

“When annotating a book, I read it first for context and tone, marking words, references, and allusions that I think a ninth-grader might wonder about,” Meter continued. “For words, my rule is usually that if I can’t easily define a word and it seems vital to understanding the sentence, I’ll make a footnote for it. I err on the side of giving students the benefit of the doubt though; nothing worse than a book patronizing you with its assumptions about your knowledge!”

“The Scarlet Letter” is an important example of American Romanticism, a literary movement that features emotion and imagination, which comes across in Hawthorne’s ethereal, highly symbolic, almost mystical style, according to Meter. It’s also relatively early in the history of American literature in general.

Nathaniel Hawthorne (1805–64) was an American novelist and short story writer. He was born in Salem, Massachusetts, and graduated from Bowdoin College. His first novel, “Fanshawe,” was published anonymously in 1828, followed by several collections of short stories, including “Twice-Told Tales” and “Mosses from an Old Manse.” His later and best-known novels include “The Scarlet Letter” (1850), “The House of the Seven Gables,” (1851) and “Tanglewood Tales” (1852), which also has a Copper Lodge edition. “The Scarlet Letter” was one of the first mass-produced books in America.