The Truth about Thanksgiving 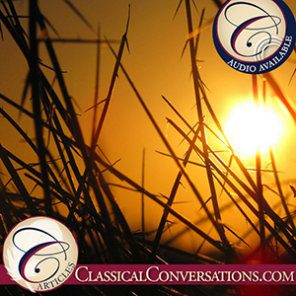 Thanksgiving has come to mean parades of fanciful floats, gourmet feasts, and football, but amidst all of that have we lost the true meaning behind the historical event? As creative homeschoolers, we try to add some meaning to the day by making paper chains that list all the things for which we are thankful. We put on pageants. We make pinecone turkeys, hand print turkeys, construction paper turkeys, and cupcake turkeys. Wouldn’t it be better, though, if we actually helped our children imagine what the Pilgrims really felt on their Thanksgiving Day feast?

These were people who had survived the crossing of an ocean on a small wooden ship. They had barely survived a harsh winter in which over fifty percent of their population had perished. They had built each house by hand and had coaxed crops out of sand. They had worked harder and had lost more than we can imagine. Yet, their attitude is breathtaking. They did not cry, “Unfair! Some have more than I!” Instead, they cried out, “Glory to God who has given us the earth and everything in it!”

What makes me think that this was their attitude? I went to original source documents. As a story is passed down, details may get lost and the teller’s agenda may seep in. Because of this, reading documents written at the time of the first Thanksgiving will give you a more accurate picture of what really happened. The version of the Thanksgiving story that I heard in public school was mostly about getting along with Native Americans—which is not a bad idea, but it is not the main idea. How much richer our understanding of the event can be when we turn to the words of the Pilgrims themselves!

A quick search of the Internet provides several original source documents. For example, a Pilgrim named Edward Winslow wrote this about the feast:

And although it be not always so plentifull, as it was at this time with us, yet by the goodness of God, we are so farre from want, that we often wish you partakers of our plentie.

We can even read the actual 1678 Boston court document, which proclaimed a day of fasting and prayer:

This Court having a sense of the necessity of that duty of Humiliation that they may join with the Neighbour Churches of the several Colonies to pour for the strong and unanimous cries unto God for obtaining of this Grace and Favour, accordingly crafting in his mercy, that in the things which we agreed to ask accordingly to his will, he will gratiously hear, and be propitious to his Servants; Do accordingly appoint Thursday, the once and twentieth day of November next, being the day agreed upon to be solemnly kept as a day of fasting and Prayer in all the Churches and Congregations throughout this Jurisdiction, strictly Inhibiting all servile labour by any of the Inhabitants of the Colony on that day.

Another document you might want to look at is “The Mayflower Compact”:

Having undertaken for the Glory of God, and Advancement of the Christian Faith, and the Honour of our King and Country, a voyage to plant the first colony in the northern Parts of Virginia;

I have a shelf full of picture books about Thanksgiving which are not exactly historically accurate. Rather than throwing them out, I read them aloud to my children and then discuss what might be a bias, or talk about how the illustrations might be over-romanticizing the event. Studying history is the process of searching out the truth. Reading source documents with our younger children is an excellent way to model the search for historical truths with them. This helps us prepare them for the time when, as older Classical Conversations students, they will learn to seek out these historical truths by themselves (they will begin this in Challenge I when they study many original American documents, including “The Mayflower Compact”).

Once we discover the truth, we will want to apply it to our own lives. How can we cultivate the strength of character, hope, and thankfulness that those original Pilgrims possessed? The Bible tells us in Romans 5:3-4 (NIV) “we also rejoice in our sufferings, because we know that suffering produces perseverance; perseverance, character; and character, hope.” I believe the hardships that the Pilgrims endured produced their thankfulness. We can do our children a favor by not smoothing out all their problems for them. Allowing them opportunities to be challenged, or even to suffer something unpleasant, might produce some perseverance and character in them, too.

Another key element to cultivate is the biblical worldview that the Pilgrims held. The Pilgrims wholeheartedly believed that, “The earth is the LORD’s and everything in it” (Psalm 24:1, NIV). Developing a biblical worldview in our culture is difficult. We should be seeking the biblical perspective of events, decisions, and daily living. Studying with Classical Conversations has really helped my family work toward a biblical worldview. I also recommend two books on the topic: Total Truth, by Nancy Pearcey, and How Should We Then Live? by Francis Schaeffer (both are available from Classical Conversations Books).

The truth is, Thanksgiving should be a time to make a commitment to studying history through original source documents, allowing our children the opportunity to persevere through tribulations, cultivating a biblical worldview, and daily giving the Lord thanks in all things…and making a few pinecone turkeys, just for fun.