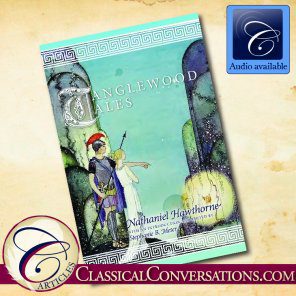 And you know what? It actually was.

I’m not sure if I’m supposed to say this or not, but I’ve always struggled to enjoy Hawthorne. I’m glad I read The Scarlet Letter in Challenge I, and I remember having fun discussing it and working through the symbolism, but…it wasn’t something I got excited about. Even in college when I had to read Hawthorne’s short stories, I couldn’t get past a feeling of drudgery in some of his writing. (Though, for the record, I ended up loving “Ethan Brand” and “The Birth-Mark.”)

Then came the Tanglewood Tales request. I was tasked with writing an introduction and footnotes for this collection of classic myths rewritten by Hawthorne. As a relatively new employee, I knew I could not raise my hand, clear my throat, and say “Excuse me? I’m sorry, but I mostly hate Hawthorne.” So I dove in. I started reading.

And I really enjoyed it.

Forget that only after weeks of writing a paper on “Ethan Brand” could I finally, genuinely like something that Hawthorne wrote. This was different. Tanglewood Tales appealed immediately. It was light, it was fun, it was funny. It felt American, the way Hawthorne does, and it felt ancient, the way mythology does, but it was also whimsical in a way I hadn’t expected from Hawthorne. I laughed out loud; I read passages to my husband.

Despite going through Foundations, Challenge, and The Book of Virtues TV show, I had not truly heard most of the stories in Tanglewood. I knew “The Minotaur,” and “Circe’s Palace,” only the gist of “The Golden Fleece” and “The Pomegranate Seeds,” and nothing of “The Pygmies” or “The Dragon’s Teeth.” So, even just reading the collection was fun.

However, writing the introduction was a different level of fun, because I tried to answer the question “Why should students study classic mythology?” Reasons jumped out at me left and right, from “It will help them understand jokes and allusions,” to “It proves how great our God is,” with many reasons in between. I have become passionate about the subject. Before working on Tanglewood Tales, I felt that students probably should study mythology. Now, after working on Tanglewood Tales and processing my thoughts, I know that students should study mythology. This project not only helped me become more familiar with Hawthorne and classic mythology, but also with myself. And with vocabulary.

In addition to writing the introduction, I also added footnotes to help readers pronounce names and places, connect dots between Roman and Greek names/characters, note interesting or funny facts, and define unfamiliar words. One of the most surprising things about this project was the number of words I looked up and defined—for myself and for the future Challenge B students. I came across some words that I did not know well enough to define, and some words that I doublechecked the meaning on, only to find that my understanding was not nearly as precise as the true definition. When Hawthorne wrote Tanglewood Tales, he had children in mind, which shows, but he did not at all talk down to them, which also shows—and which I appreciate! In a world where “awesome,” “totally” and “like” have taken on new life, we miss words like “obviate,” “gambol,” and “commodious.”