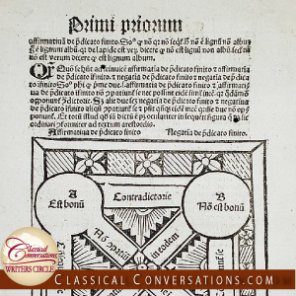 Latin is tough. In fact, it is tougher than you think it is. If you are learning Latin, you are climbing one of the toughest academic mountains out there.

I learned this only after learning Latin. After climbing the mountain, I realized the other mountains were smaller.

I grew up in Europe; my father was in the United States Air Force. While living in Holland, my sister learned Dutch. She went a Dutch school. I went to the American public school at Camp New Amsterdam. I did not learn Dutch.

Later, we moved to Germany and I decided that I would learn German. At this point, my parents were homeschooling my sister and I. Yes, my parents homeschooled us in Germany in the 1980’s. I am still not sure how they got away with it. Germany was then, and is now, no friend of the home school movement.

While in Germany, I taught myself German. It was not easy. German is a tough language. Yet, it was not insurmountable. I could speak German fairly well within a few years.

When I set out to learn Latin, I figured it would take a few years. Latin could not by any harder than German, right?

I learned the hard way and I learned the long way that Latin is tough. It took me about ten years to master Latin.

Do not panic. It will not take you that long. I took ten years because, while learning Latin, I was also getting married, having children, buying a home, paying bills, and learning every other life skill that school forgets to teach children.

One of my former students went to China to learn Chinese. When he returned, he told me that Latin was harder than Chinese. I did not see that coming. Chinese has a reputation as one of the world’s toughest languages.

Honestly, if I had known beforehand how hard Latin was going to be, I might not have attempted learning it.

So what do you do if, like me, you are plowing through Latin and you have discovered that Latin is tough, tough, tough?

Hang in there. You will make it if you persevere. I know. I did.

I have written a book on the subject, but honestly, it is not that complicated.

First, push yourself through a Latin grammar. This is a tough step. I wish you could skip it. Unfortunately, you must not skip this step. If you are in Classical Conversations you are working your way through First Year Latin by Robert Henle. This is your grammar book.

Second, you need to get the sound of the language in your head. Start listening to the New Testament in Latin. You will find a free audio version at: http://www.bible.is/ LTNNVV/Matt/1. Listen as you drive, as you fall asleep, as you work on the lawn, or as you exercise. Just listen. Do not try to translate. Just listen and imitate. You are acquiring the sound of Latin.

Third, you must read in Latin. Of course, there is plenty to read in Mr. Henle’s First Year Latin. Do not skip the readings. However, Mr. Henle’s book is still a grammar book and almost no one curls up on the couch with a good grammar book.

If you want something fun to read, in Latin, find a copy of Lingua Latina by Hans Ørberg. The beauty of this book is that it takes students from very simple Latin all the way to the very difficult Latin poetry used by the classical authors. Along the way, students follow the interesting story of a large Roman family in the first century.

Combine all three and you will not only learn this tough language, you will learn it well.

For more articles and helps on Henle Latin, visit www.dwanethomas.com.