Three Things a Guitar Taught Me about Grammar 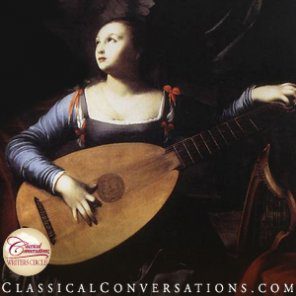 When I graduated from high school, the Foundations program was still in its infancy and my understanding of the classical model was similarly juvenile. The grammar stage of learning was for six- and seven-year-olds, I thought, not for a mature learner like me. Years later, my understanding of the classical model remains rudimentary, but I have begun to accept that I, too, must become a grammarian when I want to learn something new. A summer-long tryst with a Jasmine guitar taught me that.

The first time I held the guitar, I ran my fingers over the six strings and down the fretted neck, picturing myself as the next Joni Mitchell or Joan Baez. As a child, I had learned piano in haphazard fashion and spent two years attempting to play the violin without hyperventilating. This time, I wanted to do it right. I was determined. I was confident. After all, I was an adult learning something new of my own volition: surely this meant I was starting at the dialectic stage, at the very least.

That was day one.

By day two, when a friend began to teach me a basic strumming pattern and a few simple chords, my cool attitude began to waver, along with the muscles in my fingers. I began to reevaluate my expectations. Over the course of the summer and through a painful exercise in humility, I have come to see the parallels between my study of guitar and the way all of us approach a new subject as grammarians. Here are three of the most salient lessons I have learned:

(1) Celebrate the calluses. Sometimes, the basics of being a grammarian surprise us by just how basic they are. When learning to write, you do not begin with the alphabet; you must first build muscle control to the point of being able to hold a pencil. When learning to play the guitar, you do not begin with open chords; you must first develop enough finger strength to press the strings. Since my fingers were not accustomed to this form of exercise, the steel strings left reddened dents in the fingers of my left hand for the first month.

Practicing was painful and unpleasant, so there were weeks during which I barely picked up the guitar, and thus, my fingers continued to protest. (Cue cycle of frustration!) I was ignoring a fact known by every musician and athlete: daily practice is essential. You must work hard to learn the basics, pressing them repeatedly into your brain until they are imprinted there like a callus. Only then can you move ahead with confidence. The day I noticed calluses forming on my fingertips I felt a deep sense of accomplishment, as they were proof that I had been diligent in practicing. It should have been no surprise that my skill level increased along with the toughness of my skin.

(2) Evaluate often and honestly. Although I spent most of the summer learning chords and practicing transitions, eventually it was time to try a simple song or two. The result was not pretty, but I needed some method of evaluating my growth. After all, true assessment is not about achieving a passing score in a high-stakes setting, but about measuring progress in order to make practice more effective.

To be effective, appraisal must be frequent and honest. I was tempted to share my new skills only with those I knew would stroke my ego. Likewise, when you see your child’s first attempt to spell a three-syllable word, your instinct may be to offer unconditional praise of the accomplishment. Unfortunately, uncritical praise teaches the student that hard-earned excellence is no better than half-hearted mediocrity. Critiquing an individual may create fear of failure, but critiquing a product demonstrates confidence in an individual’s potential to improve. I learned most effectively through the efforts of teachers who praised the effort, amended the artifact, and encouraged me to try again.

(3) Seek mentors and models, human if possible. I could fumble my way through “Blowin’ in the Wind” well enough on my own, but when it came to interpreting chord charts and tackling more difficult combinations (a pesky “F” chord), I needed help. Technology was a great asset, but I could watch YouTube videos all day long, and the instructor in the video would not hear me growling in an unidentifiable language or notice that my eyes were seeking blunt objects with which to bash the uncooperative instrument.

What I needed was not a five-step program; I needed a warm hand to guide mine to the correct location on the frets. I needed the encouraging words of a friend and I needed models to remind me how beautiful the end result could be. Practicing one chord repeatedly loses some of its tedium after you listen to a classical guitarist play “Asturias” by Isaac Albéniz1, or when you read Tolkien’s description in The Silmarillion of a world created by music, in which “a sound arose of endless interchanging melodies woven in harmony that passed beyond hearing into the depths and into the heights, and the places of the dwelling of Ilúvatar were filled to overflowing, and the music and the echo of the music went out into the Void, and it was not void.”2 Master craftsmen can provide a vision for novices struggling to remember the goal for which they strive.

These three lessons—celebrating the calluses that come from routine hard work, evaluating your progress honestly, and seeking the aid of others—are equally difficult whether you are six years old, twenty-six years old, or fifty-six years old. Attempting any new venture means being willing to fail and acknowledging that you are not perfect. My journey with the guitar has been no different.

Fast-forward three months from that first day. Learning the guitar is still a slow, often regressive process for me. I do not practice as often or as mindfully as I should. I skip the basics because I want to rush ahead. I am not a model of the perfect student by any means and, for the moment, I am still solidly situated in the grammar stage. That is okay. I am humbler for the experience, both as a student and as a teacher. I can walk alongside other grammarians and celebrate each step with them because I, too, believe that at the end of their struggle lies something beautiful.