Toward the Quadrivium Event Review 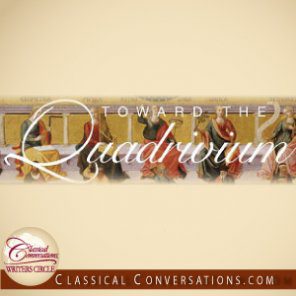 History has been full of great conversations—classical conversations, some of which continue on today and in which we are still participating. According to Leigh Bortins, founder of the homeschooling community and curriculum provider Classical Conversations, one of those conversations, however, has remained largely silent—at least in the public realm. And on April 30th, Leigh Bortins hosted what is hoped to be the first in a series of conversations on a significant, but largely neglected classical idea:  the Quadrivium.

Initiating this conversation by necessity required that it consist of more questions than answers. Thus, Leigh Bortins was joined by Nancy Pearcey, author of Soul of Science, Total Truth, and Saving Leonardo, and Charles Carpenter, a humanities professor and researcher for the development of the new SAT. Together, they considered topics ranging from the historical impact of evangelicalism on intellectualism, to a worldview’s effect on art, to the continuation of our children’s learning in higher education. They were joined by four recent Classical Conversations graduates who answered questions from Leigh Bortins and the audience on education, goals, and expectations. Heather Shirley, Executive Director of Classical Conversations, also contributed to the conversation in a breakout session where she discussed mathematics and the Trivium.

Leigh Bortins kicked off the conversation bright and early that Saturday morning before a crowd of approximately 170 people. Sitting before her was a group of moms and dads, and students and educators, interested in engaging in a discussion of ideas. This was not a conversation, as Leigh made abundantly clear, that would consist of her defining the grammar of the Quadrivium, followed by her listing the “how-to’s” of the Quadrivium, and then an explanation of a program through which the Quadrivium would be studied. No, this was a discussion in which questions were asked and homework assigned to begin answering questions such as, “What is the Quadrivium,” “How do we do the Quadrivium,” and “What would a Quadrivium-based program look like?” This was Leigh Bortins’ introduction to the day.

Nancy Pearcey, in her talk on her book, Total Truth, began answering why we don’t ask the question, “What is the Quadrivium?” She focused on the section of her book that deals with the history of evangelicalism and its impact on intellectualism. This, as she demonstrated, had much to do with the two Great Awakenings and the westward expansion of America. The Great Awakenings were led primarily by preachers who were no longer emphasizing loving God with your whole heart and mind, but rather were stressing emotional appeals to experiences of the heart alone. The mind became something that was perceived as getting in the way of the heart, and this message was delivered by preachers not known for their learnedness of the Scriptures, but by men known for their oratory and showmanship. Already, the value of loving God with one’s mind was being minimized, while loving God with one’s heart was being accentuated.

As Americans began moving westward, the pace at which they expanded put churches in a difficult position to supply the western pulpits. A dramatic shift is seen in denominational membership during this time from Presbyterian, Lutheran, and Episcopalian churches to Baptist and Methodist churches. The former continued to insist upon a trained clergy; their ability to send preachers westward was greatly inhibited as a result. The latter were more focused on fulfilling the need for clergy, and were therefore willing to send untrained clergy to the west. Converts abounded, but with no emphasis on education, the intellectual life of the Christian mind was stifled. These untrained preachers not only remained untrained, but began mocking and ridiculing the “educated clergy back east.” Thus, the study of math, science, history, literature, and the arts from a Christian perspective came to be viewed as unnecessary and reserved for academia. Then, when scientists began debating the question of origins, Christians were nowhere to be found. And, when philosophers were debating the objective nature of truth, goodness, and beauty, Christians were again nowhere to be found. Even to this day, this anti-intellectualism leads many Christians to view education—especially higher education—only from a pragmatic perspective: One’s child goes to school not to learn in order to glorify God and enjoy Him forever, but so that he can earn a paycheck. This is why we haven’t asked, “What is the Quadrivium?”

Charles Carpenter delved further into why we haven’t asked this question by exposing the delusions we have about colleges as they exist today, the dilemma in which this has put us, and the discovery that can lead us beyond it. He explained how many parents today—especially homeschooling parents—are making decisions about their children’s educations based on delusions they have of a college and its expectations. These delusions lead to placing a greater degree of importance on things like accreditation, the college’s name or reputation, and the attitude a college has towards incoming students. Charles pointed out that the particular college from which one receives a bachelor’s degree may only carry importance for the very first month of one’s very first job. After that, it is work ethic and interpersonal relations within the office that make the difference. After that first job, it is the degree itself and experience that matter more than the school from which the degree came. Parents also tend to think that colleges are looking for reasons not to accept homeschooled children, when in fact the exact opposite is the case. Colleges and universities, state or otherwise, want to enroll students and they want those students to succeed. These delusions have created a dilemma that is affecting how we choose to educate our children. Discovering and accepting this will help us to realize what should really be important for our child’s learning, and this should make us want to ask, “What is the Quadrivium?”

Leigh Bortins and Nancy Pearcey then answered questions from the audience leading into Nancy’s presentation on her book, The Soul of Science. The Quadrivium seems easy to ignore because of its emphasis on math and science, being made up of the four liberal arts: mathematics, geometry, music, and astronomy. Science is something Christians are in flux about, because of the influence of Darwinism and evolution. Is this a fight we can win? We may find ourselves asking, “What will happen when my child goes to college and is facing a Darwinist professor?” Between the questions and her presentation, Nancy was able to dispel the myth that there is an ongoing battle between faith and science. As she goes on to explain in the telling of Galileo’s story, he was not forced to recant because of a battle between faith and science. Rather, the church in Galileo’s day had committed itself to earlier faulty science claiming a geocentric universe, for which they then developed Scriptural arguments. Galileo was at odds with the church for this reason, but he was ultimately forced to recant his views not for teaching supposed falsehood, but—from his own words—because he had made fun of the Pope in his book explaining the two views: heliocentrism and geocentrism. This incorrect view that science and faith are longtime enemies of one another frightens Christians away from pursuing a greater understanding of the sciences, and therefore from asking the question, “What is the Quadrivium?”

In the student panel, four recent graduates took questions and engaged in the conversation with Leigh Bortins and the audience. They each had different goals and expectations for their lives: one was waiting a year before heading to college, another was preparing to attend Bryan College to study biology, a third was heading off to Patrick Henry College to study political science, and the fourth was already attending George Mason University and remained undecided on his major. One of the important notes that came from this panel was the feeling that throughout their homeschooling careers they constantly found themselves having to support the fact that they had been homeschooled. People would ask them questions such as, “Do you like being homeschooled?” which led them to have to defend homeschooling. They felt as though there was a legitimacy or sense of normalcy they lacked as homeschoolers—in the eyes of the questioner—that they would no longer feel in college. None of them regretted being homeschooled, but all seemed to like the normalcy they were now achieving. That misjudgment towards homeschooling on the part of society may be what is keeping us from advancing the Quadrivium conversation: Homeschooling families are eager to question the methodology of modern education through high school, but questioning post-secondary education is scarier because it is questioning that thing which brings our children legitimacy and normalcy in society’s eyes.

In the next segment, Nancy Pearcey implored us to understand the impact our worldview has on what we produce. Specifically, she showed the impact different worldviews have had on art. In one instance, she showed a Christian painting that depicted the death of martyrs. In it, the martyrs are looking up towards the heavens and see angels there waiting to receive them. In another, she showed a realist’s depiction of an execution. In it, those being executed had looks of horror on their faces with a silent church in the background indicating what may be either the absence of God or the silence of an impotent god. In a third, an empiricist paints a depiction of an execution that shows no horror in the faces of those being executed, nor in the executioners (who stand as if they are just “doing their jobs”),  nor in the onlookers (who appear as nothing more than just curious spectators). The values in the worldviews of these painters are obvious in these depictions. The recognition of the importance of worldview thinking is one of the reasons parents decide to homeschool their children, and is one of the reasons why we must ask the question, “What is the Quadrivium?”

Charles Carpenter then spoke again on the SAT. His contribution was mostly a pragmatic one: preparing your children for the SAT. However, he raised the question again of what are we expecting out of college for our children and out of the SAT as we prepare them for college. What is the purpose of education and learning?