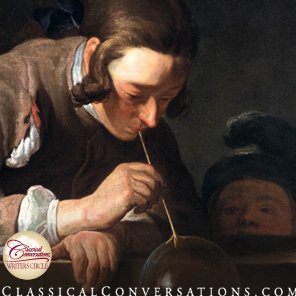 In our quest to recover the lost tools of learning, we must delve into the rich tools of memory and imagination. We often have the mistaken notion that our memory is simply the storage unit for information. This is true in the very early stages of learning, but our memory later becomes a rich treasure trove for nourishing the soul. When coupled with imagination, this tool of education can lead to a rich and full life lived to the glory of God. What else could inspire missionaries to travel to unknown lands? It is the combination of their memory of Scripture and their sympathetic imagination.

Every once in a while, the daily discipline of homeschooling comes together in a shining moment of wonderful conversation which is appropriate to family members of all ages. These conversations demonstrate the power of memory and the imagination. One morning this month (October 2012), I rose with a hopeful feeling about our day. We began the morning in the same way as always—reading Scripture. We finished the New Testament in our children’s Bible last spring, so we started this fall with the Old Testament again.

This particular morning, our Bible reading landed on the story of Joseph sending his brothers home from Egypt to fetch Benjamin. My children were astounded to read how Joseph’s meeting with his brothers confirmed that God had a plan for their family which was accomplished by Joseph being sold into slavery. Two things enabled their recognition of the importance of accepting God’s plan for our lives—memory and imagination. Because they have heard the story many times, they remembered the details of the plot. Thus, their minds were not focused on processing the details of the story, for these details were already familiar. They were free to imagine how Joseph felt as he was reunited with his brothers and how he understood that the dreams God gave him as a child had been fulfilled.

After Bible, we proceeded to our read-aloud, a biography of David Livingstone.1 The story began with his childhood in Scotland. He and his brothers worked in a cotton mill fourteen hours a day, six days a week. This allowed for a bit of mental math review (sing it with me: 14, 28, 42, 56, 70, 84). Yes, they worked in a factory eighty-four hours a week. I pointed out that this is about twice the amount of hours we expect adults in America to work each week. Having memorized the 14s multiplication table allows the children to quickly imagine the difficulty of this life. Once again, we see that memory coupled with imagination leads to understanding and, ultimately, empathy.

Naturally, the children wondered why this was such a common and accepted experience. Since the Livingstone family’s workweek was a result of the Industrial Revolution, we were able to transition to a history review. (Again, sing it with me: “Watt’s steam engine, Cartwright’s power loom and Whitney’s cotton gin spurred the Industrial Revolution . . .”) The Livingstone children were employed to quickly repair broken threads on a power loom which was fueled by a steam engine. Because they could quickly recall the facts, they were able to focus on the ramifications of the Industrial Revolution. Memory and imagination gave this technological development a human face.

Next, we see the Livingstone children enjoying a rare holiday in the Scotland hills on a Sunday. Young David brings a botany book which he has concealed under his pants’ leg. His father, a devout Christian, has forbidden him to study science because he believes that the study of the natural world leads people away from God’s truth and into discontentment. So, David is forced to study science secretly. At this point, my thirteen-year-old son piped up to say, ‘That’s just wrong. Science leads you to knowledge of God. Just like the Venus flytrap. Darwin could not explain why or how a carnivorous plant evolved. The Venus flytrap proves that God created the world.’ (As part of the Challenge B history of science seminar, he had chosen to classify the Venus flytrap according to Linnaeus’ classification system.) Once again, memory of the facts led to quick synthesis of ideas and to understanding.

Part of the Christian Heroes: Then and Now series