Video Games in the Lives of Young Men 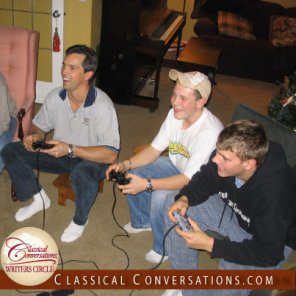 It isn’t news that video games are increasingly a part of our culture. But there’s been a surprising lack of thoughtful consideration regarding something so influential, and into which so much time is being invested. I don’t only mean that there aren’t enough parents saying “video games are bad” (though we could probably use a few more of those)—a blanket condemnation of video games is, though safer, as poorly thought out as a blanket acceptance is. What I mean is that people with opinions about video games tend to fall into one of these two shallowly-considered extremes, and that carefully considered opinions are needed about something so culturally significant.

In examining video games, this article will attempt to do three things. It will propose that “thirst for adventure” is a reason young men in particular are attracted to video games. It will explore whether video games are a positive outlet for that thirst. And it will conjecture how the habit of playing them might impact that thirst.

To learn about gamers and their desires, it’s actually helpful to look at the kind of games that are produced. Video games promise adventurous experiences—whether as a heroic supersoldier in a battle for humanity, or as a criminal living by his own rules. The merits of the particular adventure being offered is a separate discussion—the point here is that gamers, and particularly young men gamers, want adventure.

This thirst for adventure is a good thing. It is what causes young men to seek out real-life adventures and to enjoy adventure stories. Even though the adventures we read in books are more exciting than the adventures available to the ordinary young man, reading them doesn’t necessarily make young men disinterested in real life—if anything, it makes them more interested. I propose that young men do not necessarily play video games out of the desire to be lazy, but rather, for the same reason they read adventure stories: because video games are seen as a medium for experiencing fictitious adventures.

But whether video games are as good as books remains to be seen.

Next, examine the game.

While it is not necessarily my purpose to defend video games, I feel that too many parents view them as mindless entertainment when in fact they have the potential to become a viable art medium.

Games have increasingly explored the nature of storytelling. Myst used scenery as a particularly rich means of storytelling, rather than as a mere backdrop. Bioshock uses typical gaming conventions to explore such themes as freedom and choice by (spoiler) having the player remain unaware that he’s playing a mind-controlled character—this, in a way that seems it should have been obvious once it’s revealed. Historical and contemporary warfare games simulate the experience of iconic conflicts, and in 2012 Spec Ops: The Line attempted the impossible: a modern warfare game about the horrors of war, which causes the player to question what his character is doing in the game.

Published video game critique and theory abound, and the rise of independent games in very recent years has driven the creation of story-conscious content.

I say all this to show that the kinds of stories now being told in games are becoming more like the kinds of stories being told in books. Games are being made less so that the player can “be” a character and more so that he can experience that character’s story, in the first person. Thus the player’s interaction with the game (not the long-term effects of that interactivity—that will be covered in the next point) is surprisingly dissimilar to the reader’s interactivity with a book.

I think the failure of the video game to do this well may be mostly because it is so new, and less developed as a storytelling medium than, say, the book. Of course, it’s also possible that the very medium of video games places some inherent limit on the depth of the stories they can tell. And that leads to my next point.

Examine the playing of the game.

Because I have very little space left, I’ll say quickly that the playing of games can be, and often is, good. When it is made subordinate to a responsible schedule,playing a game can be time well spent, providing catharsis and engaging the imagination. Even single-player playing can become a shared experience with others who have played it—a worthwhile one if the game has any depth.

We have said that it is possible for gamers, games, and the playing of the game to be wholesome. But of course we know from experience that video games can also be a problem. How can that be? I believe the problem stems from an imbalance between the three facets I’ve examined.

The trinitarian nature of video games.

Interestingly, these three facets of video games—the gamer, the game itself, and the playing of the game—exist as a kind of trinity. They are all distinct, yet (as is visible above) one can’t talk about one without talking about the other two. Only when all three are present can one say “gameplay is happening.” While this trinitarian paradigm might be applied to other activities like reading, and doing so might make for an interesting article, my point here is simply this: to come to any conclusion about video games being “good” or “bad,” we must first consider the nature of each facet and how it should be balanced with the others.

There are three ways video games can be “bad.” The first is when there is a deficiency in the gamer. The gamer, ideally, is supposed to desire adventure, but in this situation he’s playing a game to satisfy some other desire, whether bloodthirstiness, or lust, or what is perhaps even worse, laziness. Even a richly crafted game, and even moderate play habits, will be “bad” in his hands.

The second way is when there is a deficiency in the game. The game, ideally, is supposed to convey a story, and a story, in turn, is supposed to spark imagination. But in this situation, the game is so made that it saps the desire for real-life adventure. Such a video game is “bad” even if it’s being played by a gamer with the right attitude and with moderate play habits.

The third is when there is a deficiency in the playing of the game. Ideally, the playing of games of any kind is not to separate us from our obligations, either to work or family. A player could rightly appreciate story and adventure (and still seek out real-life adventures himself), and play only games that are richly crafted to provide these things. But if his habits of play cut him off from his family, then his video game playing is “bad.”

My only final remark is that this last kind of imbalance seems, in my limited experience, to be by far the most common. It is furthermore an imbalance that creates the other two, with overplay eventually gutting a gamer’s more wholesome desires and his discernment, and thus tipping the market toward more drivelish material.

We are fast entering a generation of parents who do not remember a time before video games. This could constitute a massive cultural change, whether bad, good, or simply neutral, but different. I hope that my observations here will result in the good of gamers, of play habits, and the demand for better games, by facilitating discussions about the balance between the three.