What is the Difference Between Classical and Conventional Education? 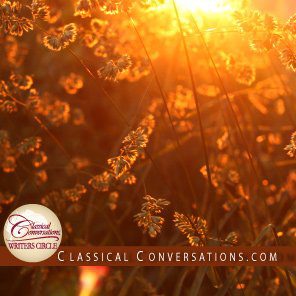 The heart of the difference between classical and conventional education is not in curriculum or teaching methods, though those are effected. The heart of the issue is in goals and beliefs. Our practices often entangle us so much that we cannot get back to the things that matter most.

The biggest difference is theological. Conventional education is ultimately nihilistic, believing that we live in a great meaningless vacuum. Classical education, Christian or philosophical, rests on the foundation of Being. Everything, quite literally follows from this.

To move a little closer to something understandable, the next biggest difference is what I will call metaphysical. Conventional education is oriented toward power (college and careers, empowerment, and so on) while classical education is oriented toward truth. Which is ultimate? Which serves the other? For the classical educator, the practical serves the true, not vice versa.

At the ethical level, the difference is easier to see. The conventional educator acts on the premise that the purpose of childhood is socialization. The classical educator sees childhood as the time for moral development. Next time you read an article about education, ask yourself which of those ends directs the author’s thinking. You may be surprised how clarifying these categories are.

In the domain of what we now misname science (better would be “natural philosophy”) the difference is that the conventional educator specializes the sciences into their own silos while the classical educator regards them as human activities subject to the same dialectical review from the whole that every other domain of knowledge is subject to.

What I mean by that is that the classical educator does not see natural science as the only way to gain knowledge, does not believe that ethics, metaphysics, and theology should be subjected to the exceptionally limited knowledge attainable through the methods of the natural sciences, and demands that the natural sciences pay attention to ethical, philosophical, and even theological matters when they do their work.

That leads to the final basic distinction I will mention here and that is the one that arises in the daily practical activities of the classical educator.

Because the classical educator believes in a real world that gives up ordered knowledge of itself, he teaches the student how to get that knowledge. The seven liberal arts were quite deliberately developed for precisely that reason. Believing that we can know truth, and believing that truth sets us free, classical educators spent thousands of years refining the tools of truth-seeking that were used from the beginning of time, but were first codified by Aristotle.

The seven liberal arts are not enough to overcome sin. But the mind that refuses to learn them out of a false sense of piety has lost its way. The seven liberal arts are the ultimate refinement of common sense. They enable us to use the God-given faculties of reason to discover truth. They can even, if we use them in a sanctified way, help us overcome sin and folly. To sit around listening for the voice of God in a mystical way when He is already speaking to us and expressing His will through the law of noncontradiction and the rising of the sun is not spiritually sound.

But that is digression. The point is that a Christian school that does not teach the seven liberal arts is robbing its students of their heritage, because it was the Christian community that identified and refined these tools of learning into the superpowerful tool for thinking that they became.

The conventional educator, on the other hand, regards truth not as something that the soul can perceive but as something relative and subjective. You have your truth; I have mine. That is synonymous for, “There is no truth.” And it lays the foundation for a teaching approach and a curriculum that is ordered to the emptiness that I claimed above was the ultimate goal of conventional education.

There is nothing to know. Just get yours: empowerment, college, career, and so on. Since there is no truth to align your soul and action with, you need to learn how to socialize (i.e., fit in). We will teach you that. We have some scientific dogma that sustains that philosophy, so all of your science instruction will be surrounded by that dogma, which only a complete idiot would ever challenge. Yes, that will make your life meaningless and yes it will make science boring for most of you, but that is the price that has to be paid. Also, you must understand that science is the ultimate arbiter of every issue because ethics, philosophy, and theology cannot be proven scientifically (and the circular reasoning behind that is none of your business). There is no room to challenge the hegemony of science. We will use it to defend our ideologies at all times and at all costs, so do not challenge its sovereignty. And do not waste our time with rubbish about the seven liberal arts. Freedom is a charming idea for rich people to think about, but we are empowering the down and out by keeping them in our schools that prevent them from learning how to find truth on their own. We do not have time for truth. Too many children are uninsured and underfed. The planet is melting. There is no time to figure out whether those things are really happening because the implications are just too great. So stop wasting time reading old books, learning how to think, and communicating your discoveries to each other. Do as you are told and we will all progress into the next century sexually liberated and living in a world where the women play football and the men do as they are told. Thank God for title IX or XI or whatever and do not ever mention Him again.

Those are the main differences between classical and conventional education.