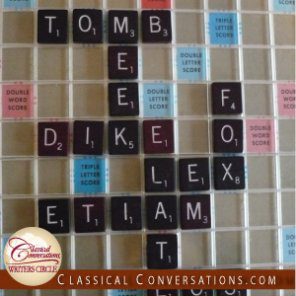 On the last day of seminar, my Challenge III students convened to present remaining projects, to discuss great ideas, to work final math problems, and, especially, to party! We celebrated a wonderful year of learning, fellowship, and classical conversations about so many ideas! As students said their goodbyes and started drifting away, two remained to wait for their moms. One spied a Scrabble game on the shelf and asked if we could play while waiting.

Lex of engagement needed to be discussed. We negotiated whether or not a dictionary could be consulted for spelling, how turns would ensue, and finally an unexpected rule request surprised me. Could we use Latin as well as English words for this game of Scrabble? After all, this was a game of words and hadn’t we been working all year with words? The other player agreed even though she had not taken Latin this year. She relayed she had good memory and was sure Latin would not be a problem as the words would be integrated, right?

I was game, and we started. Very quickly, we took turns and words formed. Latin pronouns eliminated vowels! Too soon, the moms arrived and we stopped playing. I took a picture of the board. I quickly calculated that Latin accounted for over 44% of the total words played in those few minutes. Truly, I was elated!

Integration! Was this serendipity or design resulting from clear thinking?

Integration receives special consideration not only in classical education, but also, especially, in Classical Conversations. Integration, a natural by-product along with gaining skills, is often talked about when viewing Leigh Bortins’ diagram of the Catechesis Wheel. Here subjects revolve and relate as they dance among themselves; they radiate to and from the Creator. Em! This brings us joy and celebration in learning.

Integration distinguishes the classical model from the university model. The university model specializes and compartmentalizes subjects over skills and focuses on singular knowledge of the subject matter which can reduce and insularize to create survey topics. Parents may even panic when considering what subjects need to be acquired for a high school transcript. A transcript listing can become much like a shopping list; sometimes reflecting what is trendy, what is well packaged, and what promises to be expedient for future endeavors, careers, hopes, and dreams.

Etiam, a subject or a topic survey rarely indicates proficiency unless pursued for longer study, so why do we expect that same goal for our children in 180 day increments? Instead, working on skills that create comprehension and the ability to dive deeper within a subject open eōs to the wonder of catechesis and beauty in learning.

Em! Eōs to contemplate these ideas. Then ask your student to play a game of integrated Scrabble.