Why One Pagan Ruler Forbid Christians from Teaching Pagan Classics 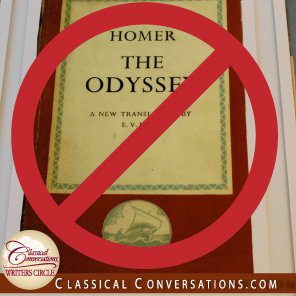 I need to tell a story, a true story from our own history. This story will help us to answer some questions we have about the content which we use to educate our children. It may also shed some light on the decisions that our government makes with regard to education. A question very frequently arises about the content that classical, Christian education pursues. The question is famously worded as, “What hath Athens to do with Jerusalem?” It is also asked as whether Christians should read or study the pagans or the pagan classics.

Lots of articles have been written asking and answering this question and can be found on Writers Circle. I have written one previously called, “The Benefit of the Classics for Youth.” Another Writers Circle author, Jennifer Courtney, has written a couple of others, “Pagan Gods in Classical, Christian Education?” and “Classical and Christian? Can it be?” I do not so much as want to answer the question, as to tell a story.

In the early first century, in the Roman Empire, even under the evil and wicked Emperor Nero, Christians were a protected sect along with the Jews. As the Jews and the Christians became more and more divided by their understanding of who Jesus of Nazareth was, and as the Jews sought to persecute this rival sect, the Christians began being recognized by the Imperial court as a religious sect distinct from the Jews. This recognition caused two immediate problems: first, they were no longer afforded the protection that had been promised to the Jewish religion and second, they began being noticed and disliked for their beliefs and practices. Nero eventually began persecuting them directly, putting them to death. In some cases, burning them alive as candles to light in his gardens at night.

This persecution continued, although sometimes more lightly or more heavily than at other times, until the early fourth century, when Constantine had his famous vision. In this vision, before a battle for Rome, he saw a cross and the promise that he would conquer under the banner of Christ. In AD 313, Constantine issued his famous Edict of Milan and Christianity became a recognized and protected religion in the empire. Eventually, Christianity became the preferred religion of the empire. That is, until the latter half of the fourth century, when a man name Julian became emperor.

Julian did not like Christianity, although he had been born to Christian parents, raised as a Christian, and even served as an officer in the church. After twenty years of following The Way, he forsook his Christianity and embraced the early paganism of Rome and Greece.

History refers to Julian as Julian the Apostate, precisely because of his forsaking the Christian faith he was raised in. But he was not just a man who went from being a church-attending Christian to a non-practicing Christian; he was much more than that. Julian the Apostate not only embraced the paganism of early Rome, but also tried to revive it as the primary religion of the Roman Empire.

Julian did this by reinstituting the persecution of Christians. However, this was not the traditional persecution of his forefathers. He did not kill, burn, or torture Christians, because Julian recognized that those practices had only served to strengthen the Christian community. Julian’s persecutions were more like harassments. He did several things to harass the Christians in the empire, but two stand out. He established a Roman philanthropic system, a proto-welfare, to rid the dependence of “good” pagans on the Christians. He is known to have said, “These impious Galileans not only feed their own poor, but ours also; welcoming them into their agape feasts, they attract them, as children are attracted, with cakes.”

He also issued the School Edict. This edict prohibited Christians from using pagan texts, such as The Iliad, The Odyssey, and The Aeneid to teach. Julian the Apostate recognized something about the teaching of those texts that undermined his program for the restoration of paganism in the Roman Empire. Christians were using these texts in a couple of different ways. First, they were able to show the superiority of the Christian faith to the pagan faith on display in those texts. Second, they were using the pagan texts to show that even Homer, Virgil, Plato, and Socrates were envisioning a religion and a world greater than what they were living in, one that was being realized in the Christian faith. Their texts had served and were continuing to serve through the lessons of Christian teachers, as a proto-gospel—a gospel preparatory to the gospel of Jesus Christ.

Julian’s School Edict makes one other thing clear. It is often assumed that the early Christians were opposed to learning from the pagan thinkers and writers. There is some evidence that this is the case. Tertullian, for one, seems to have been opposed to a kind of synthesis of Christian and pagan thinking. But Julian’s edict reveals that this was a minority view. There would, after all, be no need to outlaw something that the Christians were not doing and were even opposed to! The purpose of the edict, furthermore, reveals that the Christian teachers of his day were not guilty of synthesizing Christian and pagan thought, but were actually using pagan writings for a much nobler end, as both a preparatory gospel and to display a religion inferior to that of Christianity.

Julian recognized something about the Christian teaching of pagan texts that many fail to see today. Teaching these texts from a Christian perspective, he believed, undermined the pagan worldview and religion rather than bolstering it. Teaching these texts from a Christian perspective, moreover, strengthens the Christian’s understanding of his own faith, rather than synthesizing it with paganism or weakening it. If Julian is right, rejecting these texts for their paganism may actually be assisting the revival of paganism and undermining the classical education of Christians, rather than exalting the Christian faith. It is easier to see how high a pedestal our God is on beside the false gods of paganism, than it is by their removal.