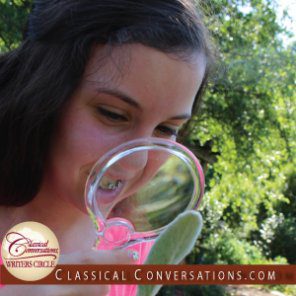 I’m going to answer this question, I really am, but first I need to make a couple of heady statements:

1.  Education in the classical tradition asserts that real knowledge should bring one to an understanding of truth.

2.  Education should change our thinking to reflect accurately the truth about ourselves, our world, our purposes, and our God—with the intent of guiding our choices and making us wise and virtuous.
You may say, “That’s all well and good for the study of arts and languages and the humanities, but surely we don’t approach math and science in that same way?” Why would anyone want to take a science subject, say biology, that should be studied empirically and turn it into a conversation about wisdom and virtue? Why distort science’s analytical methods into warm fuzzies such as imagination, observation, and contemplation? What can today’s student learn from that?

The current academic culture is preoccupied with analysis, but the student who is unable to integrate his life and his learning is doomed to conduct his analysis like a machine—in a detached and impersonal way. To quote author David Hicks, “…the end of education is not thinking; it is acting. It is not just knowing what to do; it is doing it. The sublime premise of a classical education asserts that right thinking will lead to right, if not righteous, acting.”[i] Given the ever-increasing manipulation of nature for materialistic gain, now more than ever scientific study should pursue truth and prepare our young people for the life of virtue.

Science and technology have become obsessed with analysis, with the accumulation of facts and data, and with intermediate rather than first and final causes, but to what end? Is this the way of sound, responsible learning? Modern science sees knowledge as a source of power to manipulate nature and man, taking things apart to learn from nature in order to cure diseases, reverse aging, and change genetic structures. Francis Schaeffer, author of How Should We Then Live?, would call these things the “particulars.” A classical approach to learning views knowledge as a means to pursue virtue, challenging us to look beyond the particulars to what Schaeffer calls the “universal” or ideal principle—the “whole” or truth of the thing. Let’s take a couple of examples to help us better understand the difference. To ease us in gently, we’ll start with a more whimsical model, the frog.

Let’s suppose a frog has been plopped down in front of us. What could we do to learn more about it? Clearly, one method is to take scalpel in hand and disseminate the frog into its parts so that we can learn from it and apply that knowledge to other scientific realms. This can be a good thing, but there is a two-fold danger. The first danger is obvious: by focusing on the parts or particulars, we have lost the nature of the thing itself. The frog is no longer an amphibian of metamorphic marvels, but a blueprint for increasing muscle mass or a possible cure for cancer. The emphasis is placed on how the knowledge of the frog can be used to manipulate nature. A classical consideration of the frog can take us beyond these restrictions by including observation, imagination, and contemplation.

Storytelling has given the frog a bad rap as a rather nasty, ignoble beast. The Scriptures tell us that frogs were one of the ten plagues of Egypt. A Grimm’s fairy tale presents the creature, all slimy and warty (a confusion with its land relative—the toad), as a prince in disguise. Mark Twain attempted to raise one particular humble frog from Calaveras County to literary fame. These stories serve initially to engage the mind with what we might already know (truth or fiction) about the frog. Observation of the frog, be it plopped in front of us or in a pond frolicking with other frogs, will add to our sphere of knowledge. Is the skin really slimy? Does it really have warts? Are the hind leg muscles noticeably larger than those in the forelimbs? Next, we move from observation to speculation about the nature and purpose of the frog. These are the questions of meaning and intent, of purpose and significance, that modern science is loathe to raise. These questions, like the empirical study of dissected frog parts, render experience valuable to mankind, but with one big difference: these questions link man’s justification for manipulating science with a moral responsibility.

The second danger of modern science can be seen in current research. “Science magazine has unveiled its 2015 ‘Breakthrough of the Year’ and the winner is a gene-editing technology that experts say will change life as we know it—potentially revolutionizing medicine, basic science, and agriculture.”[ii] The breakthrough was the first intentional gene editing of DNA (cutting and pasting specific portions of DNA) in human embryos. One notable physician and researcher, commenting on the controversial breakthrough, noted that he used to struggle to find the “right choice” in medicine, but he now understands that there are many right choices. What is right for one scientist, one doctor, or one researcher is not necessarily what is right for another. This is relativism at its scariest. In the absence of imagination, human life is atomized and observable only as editable bits and pieces. Man can name the parts but with no connection, purpose, or meaning to contemplate. A study of science that seeks knowledge for manipulation (e.g., preventing disease, reversing aging, or editing genomes) but is divorced from any moral obligation is ultimately a destructive power.

In a time when science and technology accentuate the need for ethics, education fails to accentuate responsible, ethical learning. Modern man will ask the question, “Can I?” when the better question is, “Ought I?” A classical, Christian study asks this question because it begins from the knowledge that man has dignity through his image in God, being made a little lower than the angels. A modern study, in the absence of a transcendent moral ideal, does not ask what ought to be because it begins from the knowledge that man is nothing more than the sum total of his genome. Science proceeds at will, but the end result is the dehumanization of man. To study science from a purely analytic perspective that excludes imagination, observation, and contemplation becomes pointless and destructive because it ignores immanent reality. Perhaps more than any other study, science should bear the greatest responsibility to prepare our young people to pursue truth and to lead a life of virtue.