Why Write? Rhetoric Across the Curriculum 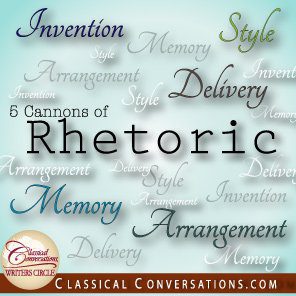 Writing well is an undisputed goal of excellent education. However, as with all things rich in character, the process of good writing bequeaths an even greater blessing. When we study formal writing using the five canons of rhetoric, we are also teaching our students to be proficient problem solvers.

Writing is a way humanity truly exercises its nature as imago Dei through the talent, not just of expressing itself, but of discovering solutions to the many challenges of human existence. Problem-solving produces the creative solutions which make life better by articulating truth, grasping goodness, celebrating beauty, and improving the conditions of human life at every level from the fundamentally physical to the transcendent and spiritual.

Other creatures exhibit problem-solving skills, but none do so remotely on the scale of discovering ways to break the chains of gravity, defy the risks of space, and brazenly travel into the unknown. None do so by constructing works of architectural splendor that soar into the sky; imitating and reflecting creation through art, music, and the written word; or designing technological advances that allow for everything from instantaneous communication to sensitive medical surgeries.

The craft of writing well engenders problem-solving abilities in all degrees and areas because the very nature of writing captures the five canons of rhetoric, the classical tools of effective expression: invention, arrangement, style, memory, and delivery. These were originally viewed in terms of formal speech-making. However, in essence, the canons of rhetoric themselves embody critical components of successful problem solving.

First, you must unveil the problem—invention—identifying the critical question(s), sorting the elements of the problem into what is known (or given) and what is unknown (that which must be discovered), and articulating the relationships between the two so that problem-solving can begin. Second, you must make a plan—arrangement—detecting the steps needed to bridge the gap between what is known and what is unknown in order to achieve a solution. Third, you must choose the most credible and effective means—style—of formally expressing the question(s) and solving the problem. Fourth, you must bring to bear all of your existing knowledge—memory—to test and evaluate the solution, perfecting, improving, and fine-tuning it. Fifth and finally, you must produce the final result—delivery—and put it to work.

If we examine man’s innovations in light of the canons of rhetoric, we can see patterns emerge that integrate not only formal speech and writing, but also mathematics, science, and all forms of art. (Please refer to the chart, below.)

The five canons of rhetoric should not be dismissed as simply an archaic method of formal oratory; rather, they reflect humanity’s innate capacity for discovery: for innovative thinking and action, for critical problem solving. When students grasp the canons, and exercise them through the process of formal writing, students learn to practice effective problem-solving skills across the spectrum of human creativity.

Just as mathematical drilling and frequent translation of Latin can cultivate logical thinking in students, writing can confer problem-solving skills. As Scott F. Crider puts it in his book, The Office of Assertion: “As one searches for means of persuasion about one’s subject, one learns more about it. Logos [occurs when]…one argues that one’s case is the most reasonable…Rhetoric, then, is…the faculty of discovering the most convincing logos” (p. 7).

So, why write? Writing is an exercise in the creativity that comes from being made in the image of God and through which mankind competently meets challenges and exercises successful governance of the creation. Excellent writing needs to be taught, not simply to facilitate true, good, and beautiful communication, but also to prepare students to exercise authentic innovation. The more students can truly problem-solve, the more reasonably, and therefore successfully, they will steward all for which they will be responsible.

*In formal speech-making, memoria originally referred to the tools and techniques an orator used to remember the main points of his speech. When the canons began to be applied to the writing process (for example, to the writing of a persuasive essay), this strict sense of memoria became somewhat moot. However, memoria can also be understood to mean the accumulated base of knowledge both of information and of presentation skills that may be brought to bear in perfecting the final product. Thus it can be seen as a broad base of knowledge against which the orator tests the validity and credibility of his message in preparation for delivery and into which he then integrates his conclusions.