A Love for Doing Hard Things with Latin 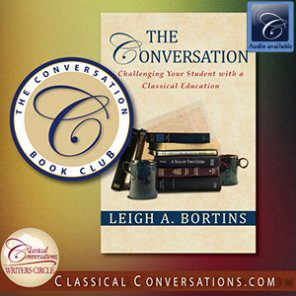 “Your child will encounter truth, goodness and beauty simply because he was given the opportunity and time to study Latin” (Leigh Bortins, The Conversation, 186).

Just as in life, there are no shortcuts in Latin. When I first began diving deep into Latin with my son, I thought it was going to be easy. After all, I had studied Spanish in high school and college; I could carry on a conversation pretty well and had spent time studying overseas. Latin was going to be a piece of cake for me. Right? Wrong.

When people ask me to compare Latin and Spanish, I personally believe Latin requires much more of you. Like a difficult aunt who demands only the highest standards, Latin makes you stretch, but you are far better for it. There is something really rewarding in doing a hard thing like Latin.

Slowly over the years, I fell in love with Latin, but it has taken time. One vocabulary word at a time, one declension at a time, one verb tense at a time—I have come to feel more confident in Latin. The difference is that you aren’t simply memorizing; you are spending time in something much deeper. You are learning a word’s history and its job in the sentence. Plus, with the mixed order of the words, it requires that you sleuth out the entire meaning in context. Ultimately, Latin gives you an ability to think in a greater way.

Some of my fondest memories in homeschooling have come from the study of Latin. As we traveled to Italy, my son found incredible joy in being able to translate Latin phrases everywhere in museums, buildings, and artwork. For him, it became a treasure hunt to discover all the connections he had made in studying Latin and history. I am quite certain by doing the difficult thing in Latin, we both have developed a reference point for doing hard things in life.

As we walk through Leigh Bortins’ book, The Conversation, we have been looking at how the subjects are connected and using rich discussions as our platform. It is especially rewarding to see how Latin can enrich other studies.  We have been using the five canons of rhetoric as our starting point and working through each subject for high school studies. If you need a refresher on the five canons, read the previous article called “Drawing Out the Wonder” here.

In Mrs. Bortins’ discussions in Chapter Ten on Latin and Foreign Languages, she addresses many of the common myths about studying a foreign language, particularly that only an expert can teach a foreign language efficiently. She argues that parents were their own students’ first language teachers by modeling it for them. If you can ask good questions and have a willing spirit, you can learn anything—even Latin. “We teach foreign languages not just for the speaking ability, but also for understanding of the structure of language,” Mrs. Bortins said. “As a parent, you first taught your child to speak your native language by modeling while your child parroted after you…You can do the same with a foreign language if you are willing to embrace a few paradigm shifts” (174).

Putting the Five Canons of Rhetoric to Work with Latin/Foreign Languages
Let’s look at how you might approach Latin or foreign language study with the five canons. For the purposes of an example at home, we will look at how a parent/student might work through Latin homework with sentence translations.

Invention—What do you see?
The first step is to get a feel for an entire Latin sentence—the big picture. My favorite thing to do is write out the sentence on a white board and read it out loud together. Have the answer key handy as a reference. You may consider inviting your students to pick out words that are familiar, noting which ones are unfamiliar to come back to. Ask your students to share what they see when they look at this sentence. What can they identify right from the beginning?

Arrangement—What does the order tell you?
With a Latin sentence, arrangement might involve considering how the order of the words affects the meaning. Typically, verbs are placed at the end of Latin sentences. I think the very best piece of advice for fearful Latin students is to “keep calm and find the verb.” Usually verbs are easy to spot and students can identify them by the way the sentence is organized. Other ideas to consider might include taking the sentence word by word for translation, parsing easy words first and looking up more difficult or unknown words.

Elocution—How will you translate this passage?
Elocution is where you re-order the translation of the individual words into a meaningful sentence. Students must consider the sentence in the context—what was happening in the passage? How does the translation affect the meaning? What might be happening on a deeper level? Is there more than one possibility for how the sentence might be translated? They may also consider if the translation reflects the original meaning stated in the answer key.

Memory—What does this remind you of?
After reading the sentence aloud to test quality, you might consider comparing it to any other translations in their memory. Does this passage remind them of anything they have read before? It doesn’t have to be related to Latin, but perhaps history or literature stories with a similar reference point or themes. Are there any stories from the Bible or scripture passages that lend themselves to comparison to the translation? Memory is an opportunity to discover connectedness in learning; Latin doesn’t need to be studied in a vacuum, but can inform and enrich other studies.

Delivery—How will you share what you have learned?
In my Challenge B class this year, we took stories of the great battle scenes and acted them out. Some students took turns narrating the translations while others pretended to be part of Hannibal’s clash with Scipio. By adding drama and performance, it created a new dimension of experience to the Latin study. By hearing how others translated various passages, students are able to learn from their peers as well. Through a theatrical performance, Latin can come alive. For fun, you might ask your students how the ancient Romans might have spoken this translation if it were happening today.

Putting It All Together
When I first began homeschooling and shared with my father, a retired physician, that his grandson would be studying Latin, he was thrilled. For him, the deeper context of words had been vital to his understanding in the medical and science fields. More than that, Latin teaches students to look beyond the obvious, to recognize that there is a richness that may be unseen. But knowledge of this richness can only be gained by time spent in relationship. This is an amazing model for how we come to know our Creator and our world in an authentic way. It is through the daily work, sometimes the very difficult work, that we are able to appreciate truth, beauty, and goodness.

Read Along in The Conversation
Read Chapter Ten