A Model for a Classical Conversation 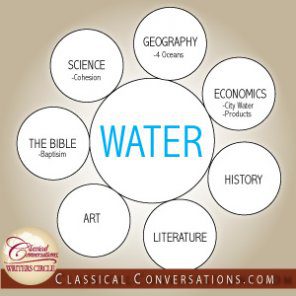 The guide for today’s science seminar in Challenge I said, “Discuss Module 4.” Previous discussions with this class had been a bit boring, so I decided I needed a new model for discussions. I did not plan any questions or make an agenda about what they needed to know. I went in with one idea in my mind: the topic wheel.

The students had spent two weeks studying a chapter on water in the physical science textbook. They had completed labs, written lab reports, and answered study questions.

I drew a topic wheel on the whiteboard. A topic wheel is simply one circle in the center and seven more circles surrounding it. I wrote “water” in the center circle. The seven other circles are intended for other subjects. The idea is to provoke thought by having the group brainstorm about what different subjects have in common with the central item. (This would be the topic of comparison if you are familiar with the five common topics.)

In the top outside circle I wrote, “Geography” and asked the class what geography and water have to do with each other.

“Canals, channels, tributaries, rivers, all that stuff from Challenge A.”

“So, channels were dug for what reason?” I asked.

People can move things on water…so it helps trade.”

In another circle on the board I wrote, “Economics” and inside, I wrote “Enables trade.”

“In what other ways does water affect economics?” I prompted.

“We pay for city water at my house.” (I wrote “city water” in the circle.)

“We have a water purifier.” (“Products” goes in the economics circle.)

Several other products related to water were mentioned for economics. Then I asked, “What’s another topic I could put in one of these circles?

“What should we put in that circle?”

“Let’s put all these facts in there like it takes two hydrogen atoms and one oxygen atom to make water.”

“Cohesion, that property where water attracts itself.”

We had added circles for history, literature, and even art, when one student said, “Water is beautiful!” We filled the circles with many facts and figures. When we only had one circle left I asked what we should put there and one student suggested, “Put the Bible in that one.” So we went around the room and had each person think of one mention of water in the Bible. We added the flood, baptism, turning water to wine, parting the red sea, and so on. Then, the last student brought up creation and that water was created before land. He wondered how that could be. How can you have an ocean without land forming the bottom of the ocean? This launched a discussion that went back to the properties of water listed in the science section. Could cohesion have allowed water to form a sphere in space? Would it create its own gravity? What would that have been like?

A very enthusiastic discussion followed, with students applying what they knew about water to this idea of a sphere of water floating in space during the time of creation.

I was thrilled that the study of physical science had led us to this point. Our minds were stretched by thinking this through and we stood amazed at the complexity of water and its wonderful creator. And I had not planned anything! I went in with one tool in mind and facilitated a discussion and these wonderfully created and creative students did a lot of thinking and arrived at this great realization that I could not have explained to them if I had spent hours writing a lecture and doing research.

I think this is what makes a classical education great: we get together and we practice thinking and talking about what we have studied, and we learn more about the Lord because of it all.

That was a great classical conversation.