A Quadrivium Developed (Part One) 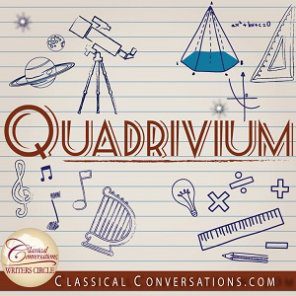 “The value of an education in a liberal arts college is not the learning of many facts but the training of the mind to think something that cannot be learned from textbooks.”
—Albert Einstein

Education is much more than teaching specific content needed to pass the right tests in order to secure the right occupation. However, many of us still feel pressured to question the value of certain studies and instead of pursuing them, we dive into direct streams for employment and security. For the most part, a liberal arts education in America has been hijacked into a career-oriented education where students are more prepared to receive the feelings of security than they are ready to be good citizens. This is not why a liberal arts education was originally developed. Classical Conversations desires to recover those lost modules of education that help students see the joy of living through studying and learning. It is through this joy that God’s children can truly embrace their mission of making God’s glory known over all the earth. This is why CC has been moving Toward the Quadrivium.

The four mathematical arts of the quadrivium—arithmetic, geometry, harmonics (music), and astronomy—were foundational for Western education and perhaps even more influential to the development of the arts seen in the Renaissance period. However, before we attempt to understand the medieval quadrivium we must go back into history to see how the connections were made between the literary arts (trivium) and the mathematical disciplines (quadrivium). Over the next several weeks, I hope to provide you with a brief historical outlook on the development of the quadrivium education taught in the medieval period as part of a liberal arts education. We will look at the origins of its four subjects, how it was Christianized, and then we will explore how it would have looked in the medieval university. Hopefully, this overview of the origins of the quadrivium will give you more of the context for why Classical Conversations will be moving toward a quadrivium education.

The subjects of the quadrivium have been taught in relation to one another since the earliest roots of Greek education. It was Pythagoras who taught his followers, the Pythagoreans, that the subjects of math, astronomy, and music should be taught as “sister sciences.” Plato gives credit to the Pythagoreans for these “sister studies” in the seventh book of his well-known writing, The Republic.[i] Plato outlines the ideal education in three classes: elementary, primary, and higher education. In the elementary class, students would learn gymnastics, music, and letters (grammar). In the primary class, students would learn arithmetic, geometry, astronomy, and musical harmony. The higher education would consist of the subject of philosophy. It was these classes that Plato believed would prepare one to be a truly free citizen. As you might notice, herein lay the beginning ideas behind the seven liberal arts.[ii]

Some argue that the roots of the quadrivium go back even earlier than Pythagoras. It is believed that Pythagoras lived in Egypt for over twenty years and was educated within the Egyptian temples. While in Egypt, he was taught the subjects of religion, philosophy, and musical science. His associations with music’s tones and the planets, including his connections between music, time, and math, all may have been influences of an Egyptian education.[iii] Nonetheless, the subjects of the seven liberal arts began their development most significantly within Greek education.

In the earliest days of Greek education, emphasis was placed mostly on the gymnast. Music was incorporated with gymnastics and included the art of grammar, but bodily education came first through the belief that all other forms of knowledge and learning flowed from the mighty human body. The training of the body was primary to the training of the mind. Greek education emphasized the training of the body as sort of a prerequisite to studying philosophy and mathematics. Gymnastics and music were to train the body to physically understand what it meant to be harmonized. How could one effectively understand or be inspired by geometry if one did not know how to use his arms and legs properly? This emphasis on the body was motivated by the Greek’s desire for true citizenship by embracing the moral and social aspects of what it meant to be human. This union of body and soul was fragmented when Greek culture clashed with Roman culture. Roman civilization took Greek education and separated the distinctions of body and soul into two spheres. Although the idea of the gymnast as key to education was imitated by Roman culture, the emphasis of the body began to fade and eventually the soul was considered far superior than the body. This is a crucial difference to the traditional Greek understanding of the soul. The soul began to take precedence as the revealer of the outward. This new ideal of man, influenced by the Romans, would continue into medieval education and from it would come the ultimate man, the rhetorician.[iv]

Greek curriculum continued to evolve with Roman influence and efforts were made to adopt a national education in the first century BC. It was this period where the birth of Latin textbooks developed. Three leaders of this educational movement were Caesar, Cicero, and M. Terentius Varro. Varro (116-27 BC), a contemporary of Caesar and Cicero, attempted to draw up a system for education in his treatise Libri Novem Disciplinarum that is believed to be an outline for what would later become the medieval trivium and quadrivium. Varro added the subjects of medicine and architecture to this treatise.[v]

Roman educators attempted to imitate this Greek education outlined by Varro, but struggled to adjust to anything that would not be practical in nature. For example, Roman educators condensed the study of mathematics to a basic minimum compared to the Greeks. Roman educators also started secondary education at the sixteenth year compared to the Greeks who started secondary education at the twentieth year. While the principles of primary and higher education remained, the subjects taught within these two tiers continued to vary for centuries. Around the third century A.D., Roman schools became influenced by educators from Gaul and Spain where rhetoric was thought of as the highest form of education. This influence penetrated into the primary education levels where schools were improved with the basics of rhetoric and dialectics. By the fourth century, the curriculum of the pagan Roman schools developed into the subjects of grammar, rhetoric, dialectic, arithmetic, geometry, music, and astronomy. This evidence is clearer in the research of Martianus Capella’s works where he describes these seven liberal arts as the standards of his time. As a model, Capella turned to the works of Varro as a guide to the poetic nature of the seven liberal arts, but left out Varro’s added subjects, medicine and architecture.[vi] It was Capella’s work De nuptis Philogogiae et Mercurii that gave more substantial form to the notion of the seven liberal arts that would later become the quadrivium of the medieval period.[vii]

To read Part Two in this article series, click here.

[i] Charles H. Kahn, Pythagoras and the Pythagoreans: A Brief History, Hackett Publishing, Indianapolis, IN, 2001, 13.

[iii] Williams Smythe Babcock Matthew, A Popular History of the Art of Music: From the Earliest Times Until the Present (1891), The Music Magazine Publishing Co. 1894, pg. 59.

[iv] Rudolf Steiner, Education: Principles of Greek Education, Lecture #2, August 6th, 1923. Here Steiner says that body education found in early Greek times has been entirely lost and that these early Greek educations should be given much more consideration. He argues that the Greeks concerned themselves with training their bodies (wrestling) and organs (music) so that they could realize their true identity in the Cosmos and therefore be far more responsive toward the spiritual world. In my opinion, Steiner gives helpful information where we do not see the many dualistic tendencies that modern scholars place on Greek education.