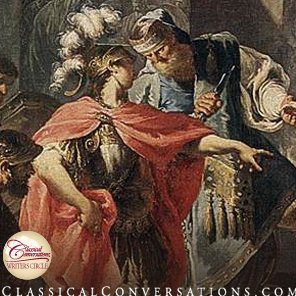 In Homer’s Iliad, Achilles refuses to accept gifts from the hand of Agamemnon precisely because he refuses to become “the king’s man.” Agamemnon had wronged Achilles—grievously—and to receive his gifts would amount to admitting that it was within Agamemnon’s authority to commit such a wrong; it would equate with accepting the shame Agamemnon had caused him.

We, of course, do not understand this because we do not learn truth from proverbs or literature any more. In our culture, we learn truth through the intellectual pursuit of knowledge, solely through science, empiricism, and nonfiction (the results of someone else’s science and empiricism). To put it metaphorically, forty-five states and the District of Columbia have become “the king’s men” because they are quick to want his—the government’s—coin, and because they are willing to submit to authority which he—again, the government—does not actually have.

You may recall my response to President Barack Obama’s State of the Union Address in 2011, specifically the education portion of it:

Apparently, the President’s idea of more competition and more control for schools and states is very different from that for which I had optimistically been hoping. With regard to competition, President Obama created a false sense of competition by encouraging states to adopt Common Core State Standards. By adopting the standards, states became eligible to receive and compete for federal funds—funds that had already been taken from the citizens of those states and others.

With respect to control, in his 2011 speech President Obama seemed to have had in mind that schools and states would continue to decide which books their students would read. This is actually a falsehood—or at least an overstatement of the authority states actually retained. They can choose the books their students read, but within the confines of the Common Core State Standards, students have to read books of which a large majority—70%!— must be nonfiction (or what the standards call “informational” books) and 30% of them can be fiction (or what the standards call “literary” books).

Some educators and thinkers have been accused of overreacting when they claim that the new standards will require English teachers to remove large portions of their reading materials to replace them with “informational” books. It has been suggested that they are missing an important part of the standards (found in a footnote on page 5 of 66):

Proponents, referring to this footnote, point out that if a math teacher has his students read Euclid’s Elements, then that is counted as part of the 70%. Concerned English teachers respond by pointing out, and sadly they are correct, that math teachers who are not already including Euclid are not going to begin doing so because of this standard, and the responsibility to meet the reading requirements will still fall squarely on English teachers. Thus, English teachers will still have to remove some Shakespeare, To Kill a Mockingbird, The Scarlet Letter, and other great literature to make room for some of the Common Core State Standards recommended books, such as

The list above is but a sampling of the recommended “informational” books to be read, albeit a sampling of the most boring—probably. The thing is, one might not necessarily be opposed to reading some of these books and essays (such as “The Evolution of the Grocery Bag”), but would one prefer their children read these as part of the 70% of their required reading rather than additional plays by Shakespeare or other great books that have been cut from the list to meet the required percentages?

As The Washington Post points out, “The standards are designed to ensure that, for the first time, third-graders in Maine will acquire the same knowledge and skills as their peers in Hawaii.” So much for “more control” at the state and school level. While the schools may have the authority to choose which resources they use, they are restricted by the percentages as to the type of books they will be, and there is a necessary emphasis on skills that subordinates content. This approach assumes that children in Maine and Hawaii have the same needs (at least with regard to what skills should be developed). It also assumes that they have the same religious, cultural, and socioeconomic background, and that they have the same learning styles and skills. It assumes that they are exactly the same in every way and therefore learn the same way and need to learn the same things. This is simply untrue, another lie. Homeschooling parents recognize this, as do teachers—bureaucrats, not so much.

This program assumes that knowledge comes through the scientific and empirical, or through reports of scientific and empirical observation and experience—“informational” reading. What it fails to realize is what New York University president John Sexton points out in his new book, Baseball as a Road to God: Seeing Beyond the Game: life is ineffable. There are things we do not, cannot, and will not know if we limit learning to the exercise of science. We learn to live in the ineffable through ineffable experiences—Sexton argues that baseball is one of those experiences—many of which we can only enjoy through literature.

The study of the classics and the great books gives us a knowledge and experience with the ineffable that can be obtained no other way. We learn about value-laden words and ideas like duty, glory, love, virtue, and loyalty through reading literature in a way that we cannot learn about them through dictionaries, encyclopedias, Federal Reserve reports, or government reports. We learn not only to recognize them, but also to live them. We learn about duty from Aeneas, glory from Achilles, love (romantic) from Beatrice and Benedick, love (unconditional) from Aslan, virtue from Digory, and loyalty from Telemachus.

The loss of reading these books, and therefore the learning and experiencing of the ineffable, will simply further serve to exacerbate the problem with American education. It is the failure to read proverbs like, “He who takes the king’s coin becomes the king’s man,” and stories like The Iliad, both of which teach us not to surrender ourselves to the king—just as forty-five US states and the District of Columbia have done with their educational standards. They did this voluntarily, of course, if by voluntary you mean they were coerced by big federal money. In doing so, however, they will now produce future generations who have learned even less from fewer of the classics and great books; future generations who will continue to subjugate themselves to the Washington elite for the sake of a few coins.