A review of The Hobbit, for people who don’t like it when they ‘change stuff.’ 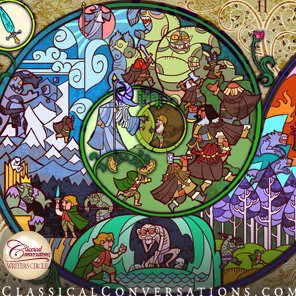 That is my typographical interpretation of the Shire music from Peter Jackson’s Lord of the Rings and Hobbit films. It loses something in translation to text, does it not? This often happens when books are translated to the big screen, but read on and I will tell you why, in the case of the Hobbit movie, I am willing to give it a big pass.

I know Classical Conversations is not usually in the business of writing movie reviews, because we do not want to be in the position of recommending films for your family to watch. However, The Hobbit is different. After all, we sell the book version in our bookstore. Since it is safe to assume that our audience is already familiar with The Hobbit and likely has made some decision about seeing the movie, I think a review of the recent screen adaptation is in order.

First, I want to offer a word on film adaptations in general. Many people are going to object to the “liberties” taken with The Hobbit by Lord of the Rings director Peter Jackson. For example, the book contains no mention of Gandalf’s brother wizard, Radagast the Brown, though the film devotes considerable time to him; in the book the goblin king is less whimsical; in the book the dwarf with whom Bilbo has the closest relationship is Balin, not Dwalin.

My answer to those people is, of course, that if they did not want to see a movie version of The Hobbit, they should not have gone to see one. Staying at home and rereading the book would have been a much more satisfying experience for them.

Note that I am not downplaying their sentiments at all; reading Tolkien probably is a more satisfying experience than watching this movie. Instead, I want to point out why. And it is not the easy answer that “Peter Jackson got the details wrong.” It is because the book form is a richer art form than the film form. A book has to to be stripped down in some ways, and expanded in others, to make a film version.

When watching a favorite story being altered on screen, it is comforting to remember that the word version comes from the Latin word vertere, meaning “to turn.” It has this root in common with English words like diverge, converge, and vertex.  A movie version is just that: it is another version. It is the story you know, having been “turned” to the purposes of moviedom. In this sense, adapting a book to screen is not unlike translating it into another language. When one understands both languages and understands the reasons the changes were made, they cannot only be forgivable, but even enjoyable.

When watching a movie version, the question that is important to ask first is “Is this a good movie?” not “Is this just like the book?” (because it won’t be). After engaging this question, you can have a much more fruitful discussion of the story the movie tells and how it compares to the story the book tells.

This is a movie-viewing philosophy I call “Accepting the Movie for What It Is.” Granted, it is a philosophy that is extremely difficult to adopt for those of us who really love books—believe me, I know. However, with practice I have learned to switch off my inner bookworm and switch on my inner film critic.

The way I see it, there are three important categories to keep in mind when talking about the changes in any movie adaptation.

Thematic changes to accentuate a theme. In Tolkien’s book, we are told that Bilbo Baggins thinks often of his cozy hobbit hole. In Peter Jackson’s film, Bilbo does not only think this, but at one point actually packs up and tries to leave Thorin and company.

This is an example of a story change that stays true to a theme in the book; namely, the theme which Peter Jackson believes to be the main one. From Peter Jackson’s perspective (with which I will tentatively agree), the main point of The Hobbit is the value of home. Tolkien had subtler tools for telling us this: spelling out what Bilbo is thinking, for example. But in the movie it is important for characters to actually have conversations about this, for Bilbo to be told that he does not fit in, and for him to discover pity for those who have no home. This is not an alteration that changes the essence of the story (homesickness), but rather one that translates it into the language of film.

Such a change is good as long as a) the theme the filmmaker chooses is really an important one from the book, and b) doing so does not crowd some other more crucial theme. Observing changes like this can even point out themes to you that you might have glossed over while reading the book.

Detail changes. In addition to changes that make themes work on screen, movies also have to make details work on screen. Film has limitations: they are short compared to books, they contain only visual and auditory elements, and in scenes where people are just talking, movies get boring much faster than books do.

It is not my intention to go over every detail change, such as most of the dwarves toppling in through Bilbo’s doorway all at once instead of arriving by ones and twos over the course of half an hour. Instead, I am bringing them up to point out that many detail changes (the insertion of an action scene here, the truncation of a conversation there) do not necessarily damage the essence of the story.

The one detail change I will mention, is one of the biggest: the addition of some vengeful goblins who hunt Thorin and company throughout the film. Though such an ongoing adversary is not present in the book, it is very much needed in a movie.

Changes that offer explanations. Books have more time to explain things; movies have to offer shorter explanations for the same things. As always, such changes are good as long as they remain true to the spirit of the book.

With The Hobbit it is a little different. In the Tolkien universe, there are a lot of things that are only explained in unpublished notes—in those obscure portions of the Tolkien canon that only “nerds” read. It is in these explanatory scenes that The Hobbit movie excels. Whereas the book is “the story of how a Baggins had an adventure, and found himself doing and saying things altogether unexpected,” the movie tells a more broad-spectrum version of the same tale, synthesizing the story of The Hobbit with backstory of Lord of the Rings in order to create something never before seen.

At times the action gets a little video-gamish and it probably could shed about twenty minutes of running and fighting throughout, but boys are going to love it, and I look forward to feeding the adventurous spirits of my sons with it someday. I wish more of the dwarves were developed as characters. I love its depiction of Radagast the Brown and his animal friends. Martin Freeman is wonderful as Bilbo. I wish more use had been made of 3-D technology by moving the viewpoint through space in ways we have not already seen in 2-D movies—or in ways that were not outright blurry to my twenty-seven year old, 20/20 eyes, though they will probably look fine in home video.

Ultimately, The Hobbit balances action and breathtaking locales with all the talky parts, the emotions and conversations, to create a well-rounded adventure film. Thinking of it as a Lord of the Rings prequel, or even renaming it Peter Jackson’s Middle Earth in my head, helped me accept it wholeheartedly as a fun movie tribute to the literary phenomenon that is J.R.R. Tolkien.