Are Our Communities Vehicles of Grace? 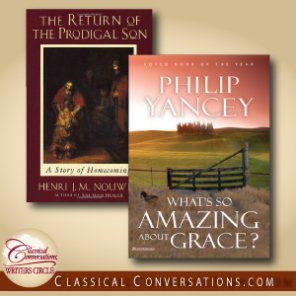 Sometimes God likes to hit us over the head with a two-by-four. Not literally, in my case. However, for the last six months, God has been teaching me about His grace. First, a friend recommended a little devotional book about the prodigal son. Then, another friend recommended a book about Christianity and grace. Of all things, I bought a novel for some relaxing reading. Guess what it is all about? Yep. Grace.

The second book I read was Philip Yancey’s What’s So Amazing About Grace? In the opening pages, he tells the story of a man encountering an old prostitute who is in desperate need. The man asks if she has sought help at the church. Her response is (in a loose paraphrase), “Why would I go to a church? I’m already feeling bad about myself. That would just make me feel worse.” Ouch. This made me think about whether or not I have seen any desperate people in my church. After all, Jesus hung out with tax collectors and women of ill repute.

Then I started thinking about our communities and how we have an amazing opportunity to be the vehicles of God’s grace on earth; if we choose to be.

My family has been in Classical Conversations for ten years now. We began in a Foundations community with twenty-one sweet children, all under the age of ten. During the first few weeks, we felt like shipwreck survivors in a lifeboat. In those days, there wasn’t as much training available, and I am not sure we really knew what we were doing, but we were committed to figuring it out together. We were on a mission and our hearts were knit together.

However, it did not take long for differences of opinion to crop up. After all, any time humans are in a group, even one as small as a family, we start to have division. We stayed close to each other, though, and learned some important lessons about living together in community.

First, we learned that praying for one another and for the children would bind us together like nothing else—through illness and job loss and difficult pregnancies. Second, we learned the truth of the verse that love covers a multitude of sins (I Peter 4:8). Finally, we learned to sacrifice some of our individual desires for the sake of the community.

Years later, I am in a large community with sixty-four kids in Foundations and almost as many in Challenge, and I am now the parent of two teenagers. Now, we find ourselves faced with differences of opinion about appropriate dress, movies, music, hair color, and dating. Those of us with older children have learned that sometimes our children will try things that we never thought they would try as homeschoolers.

We have a choice. We can pronounce judgment on one another or we can return to our first lessons—to pray for one another, love one another, and give out grace abundantly.

Do not misunderstand me. I do not mean that we should not have standards for our children’s behavior or for our young adults’ behavior, but I have learned the hard way that those behavior issues which I can see often stem from stories and struggles which I cannot see. Some of our students have lost parents to untimely deaths; others are in the process of forging new blended families. Still others are simply trying to figure out who they really are as they stretch toward adulthood.

We have a choice. We can pronounce judgment on them or we can pull them close and love them fiercely through it. We can push them away or we can claim them for Christ.

In his book The Return of the Prodigal Son, Nouwen reflects on the profound mystery of the father letting the younger son leave home:

Here the mystery of my life is unveiled. I am loved so much that I am left free to leave home. The blessing is there from the beginning. I have left it and keep on leaving it. But the Father is always looking for me with outstretched arms to receive me back and whisper again in my ear: “You are my Beloved, on you my favor rests.”

Are we stretching out our arms and speaking words of love?

When I was the state manager of Oklahoma several years ago, I saw communities reach out and extend grace to their members through all kinds of trials, but I also saw them extend grace to one another every day over their differences. Once, I was speaking at a practicum and fell ill with bronchitis. By the third day, I was in danger of not being able to speak at all. Five ladies from very different religious backgrounds gathered around me and prayed according to their traditions. It was the most beautiful thing I have ever seen. Here, in the flesh, was my own picture of Christ’s last prayer for the disciples when He said, “[I pray that] they all may be one; as thou, Father, art in me, and I in thee, that they also may be one in us…” (John 17:21, KJV).

As Nouwen repeatedly points out, we are not called to be the younger son or the older brother. We are called to be the father. Our communities have the opportunity to live out Christ’s last prayer for the disciples as we stand unified.

Will we embrace the mission no matter the cost? Will we run out to meet the prodigal son?