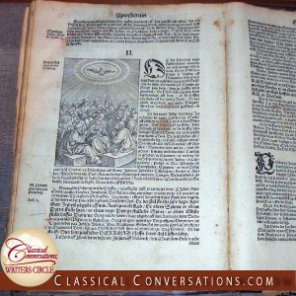 Perhaps you are familiar with the book Carry On, Mr. Bowditch by Jean Lee Latham.

How does he do it?

He uses a trick we can all imitate. It’s a rather simple trick. I have used the same trick to teach myself Latin, Greek, and Spanish. These days, I am using it again to teach myself Italian and French.

So, what was the trick?

Simple. Read the Bible in another language.

The truth is, learning a new language is not as complicated as we like to think it is. Nathaniel Bowditch was on to something. It really does require only three cheap items: a dictionary, a grammar book, and the Bible.

I would add one thing to the list. I would add audio training. Nathaniel Bowditch did not have this in the 1700s, but we have it these days, and we should use it.

Until recently, there was almost no audio content available for Latin. This changed in 2011, when www.FaithComesByHearing.com released www.bible.is. Here you will find the entire New Testament, fully dramatized as an audio book, in Latin, for free! Thanks to www.bible.is, you now have access to a massive Latin audio book. This is significant, because such an audio book has never been available in Latin before.

For Christian students, this is fantastic news. You should be reading the Bible daily anyway, and now you will be able to read the Bible and learn Latin at the same time.

But what if you are not a Christian?

You should listen to the Bible anyway.

There are other practical reasons to listen to the Bible in Latin.

First of all, the free audio version is the most audio content you will find in Latin. I have personally scoured the Internet looking for audio content in Latin. Until the release of www.bible.is, I was only able to find snippets. Nothing comprehensive was available.

Second, the Bible is written at, roughly, a sixth-grade reading level. This makes it a perfect first book in Latin.

Third, the Bible exists in so many other languages. Do you already speak French? Read the Bible in Latin and French simultaneously. Your understanding of French and Latin will grow.

How exactly do you do this?

Simple. Spend an hour or so just listening to one of the four Gospels every day. You may understand nothing in the beginning. It doesn’t matter. Do it anyway. In time, you will understand.

Each day, spend a half hour to an hour studying the grammar book. By the end of one year, after working through the Latin grammar, listening to the Bible in Latin, and consulting the Latin dictionary as you go, you will understand most of what you hear.

Oh, there is one more thing Nathaniel Bowditch had that you are going to need. Though it is never mentioned in the book, it is there, all right: he had grit.

Latin is not an easy language to learn. He stuck to it. He chose not to give up when it was difficult. You, too, are going to need a heavy dose of grit as you learn Latin.

Combine a Latin grammar, a Latin dictionary, a Latin Bible, and a good dose of grit, and you could be reading in Latin by next summer.