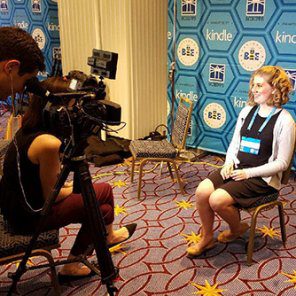 Lydia Bitterman, #140 in the Scripps National Spelling Bee, successfully spelled her words for the judges in Rounds 2 and 3 on Wednesday, but she and most her fellow spellers failed to advance to the 4th Round due their scores on the preliminary written test that included 12 spelling words and 14 vocabulary words.

The 12-year-old Classical Conversations student from Cedar Rapids, Iowa, successfully spelled “suivez,” which means “follow” and is used as a direction in music for the accompanist or orchestra to follow the soloist, in Round 2 and “dominion” in Round 3. Of the 291 contestants who began the competition on Tuesday, 32 were knocked out in Round 2 and 71 were knocked out in Round 3. Then the written test scores came into play, and of the remaining 188 spellers, including Lydia, only 40 had high enough test scores to advance to Round 4 on Thursday.

The rising Challenge B student is the daughter of Mike and Tara Bitterman and has a younger sister, Holly. While Tara will be Lydia’s Challenge B tutor in the fall at the Marion, Iowa, CC community and has tutored Challenge A for three years, Mike is a project engineer at CCB Packaging in Hiawatha, Iowa.

In order to qualify for the National Spelling Bee, Lydia was sponsored by the Homeschool Assistance Program in Marion, Iowa. She competed at Iowa State University in Ames against 15 other students, and, after only six rounds, won the state championship with the word “pinafore.”

Lydia and her family are looking forward to spending some more time in Washington, D.C., before starting the thousand-mile drive home.

Besides touring the nation’s monuments, the Smithsonian and the Holocaust Museum, one of Lydia’s favorite memories will be being interviewed by two local TV stations.

Since Lydia is only 12 (she’ll be 13 in a couple of weeks), she could still qualify for the National Spelling Bee in 2018 and 2019. Several of this year’s finalists were three-time national spellers.

Twelve-year-old Ananya Vinay, speller #264, from Fresno, California, won the 2017 championship in the 20th championship round Thursday night at about 11:30 p.m. with the word “marocain,” a type of fabric. She correctly spelled 35 straight words from the Merriam-Webster Online Dictionary along the way. Ananya, who also competed at the National Spelling Bee in 2016, will receive $40,000 in cash, a $2,500 U.S. Savings Bond, a trophy and a complete reference library.